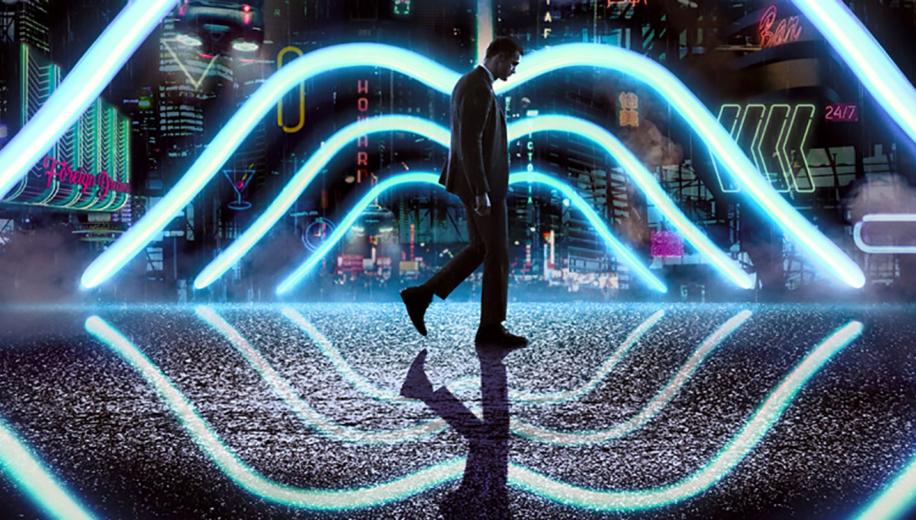 Whilst its original TV shows go from strength to strength - particularly in the sci-fi department, with Star Trek: Discovery and Altered Carbon showing just what production values they are prepared to commit - Netflix's original movies have struggled to compete with their Big Screen counterparts, which is clearly the streaming giant's ultimate goal. Nevertheless they keep trying, and the results are promising, getting some impressive filmmaking talent involved, from David Ayer (Fury, End of Watch) on the engaging Will Smith/Joel Edgerton fantasy cop sci-fi actioner, Bright, to Cary Fukunaga (True Detective) on the powerful Idris Elba drama Beast of No Nation, with eagerly anticipated upcoming work from Ex Machina's Alex Garland on the Natalie Portman sci-fi thriller Annihilation, and no less than Scorsese, DeNiro, and Pacino on the gangster drama, The Irishman.
The latest entry is Duncan Jones' Mute, a solid but not exceptional effort from the impressive filmmaker, who draws in a roster of familiar faces, from Alexander Skarsgard (Big Little Lies) to Paul Rudd (Ant Man) and Justin Theroux (The Leftovers). The story is set decades into the future, where Skarsgard's mute Amish bartender has to trawl the neon-clad Berlin underbelly to find his missing waitress girlfriend, whilst AWOL US medic Rudd tries to escape his life patching up Russian mobsters in an illegal clinic, and start afresh with his young daughter. Jones has some great ideas, clearly keen on establishing a broader Moon-iverse with this being set not just in the same timeline as Moon, but the very same world, and with a reported intent on making this a trilogy of movies - Moon, Mute and an as-yet untitled third entry. Mute, however, does not quite live up to that kind of comparison. Whilst it clearly trades in overt Blade Runner ('82) vibes, Mute, possibly for budgetary reasons, remains relatively near-future in style, throwing in a single, likely expensive CG skyline fly-by shot to set the scene, but remaining on otherwise rather familiar streets, peppered with more futuristic vehicles and tech but not really straying too far from what we know.

Indeed even the narrative is really quite familiar, pure old school noir in its story of a very personal missing persons investigation involving criminal lowlives and people living on the fringe, given a new lease of life by injecting it into this semi-future-scape, whilst further attempting to keep things fresh through the telling of dual narratives; the second tale, involving Rudd on a clear collision course with Skarsgard's lumbering mute Amish bartender, whose technophobia leads to an eye-opening voyage as he tries to get to the bottom of his girlfriend's sudden disappearance.


At its best, it could be seen as a future-noir take on scandi-drama a la Girl with the Dragon Tattoo.

It's perhaps in the telling of dual narratives that Jones' arguably overlong and possibly even bloated Moon follow-up comes somewhat undone, with the editing a little haphazard (ruining Clint Mansell's score, which simply can't keep up) as it tries to detail the bartender's story with some kind of tense imperative, all the while undermining it by intercutting with Rudd's seemingly equally urgent desire to get exit visas for him and his daughter. The tension soon dissipates, and after a while you perhaps even lose track of how long the bartender has been on his journey. Days, weeks - one night?

Ultimately the Rudd/Theroux storyline is afforded just as much limelight as the missing persons tale, and whilst it's to the detriment of the initial missing persons strand, it's the right move in terms of content because it's both more involving and more unconventional, playing with heavy issues of paedophilia, war-born brotherly bonds and desperate paternal instincts in ways which are often rather subversive - Rudd alone playing admirably against type and certainly enjoying a much richer character design than Skarsgard, whose stoic hero has the same kind of limited communication as Sally Hawkins' surprisingly Oscar-nominated heroine in the disappointingly predictable schmaltz that was the surprisingly Oscar-nominated The Shape of Water. It's interesting that two films with mute lead characters have been released in the space of a week, although here the Amish angle feels a little more contrived in its attempt to justify why somebody in this future of medical advancements would have such a disability (almost as if Jones wanted his protagonist to be mute, but couldn't quite figure out how to explain it).

Netflix have secured the work of yet another impressive filmmaker and cast, but also yet again delivered a product which is as much Netflix Original as it is the style of said filmmaker, cut from the same mold of glossy but modest-budget and limited scale offerings that are quite familiar now, and establishing the same kind of feeling of unfinished work that plagued - for example - the recently released Netflix feature, The Cloverfield Project.

Mute, at its best, and if you skew your view of it somewhat, could be seen as a future-noir take on scandi-drama a la Girl with the Dragon Tattoo, with enough strong and unusual elements in its to give it some measure of distinction from the familiar steps it often treads in, but perhaps not enough refinement - or maybe even not enough direction - to bring its coalescing story arcs into one cohesive and satisfying whole. Definitely worth checking out, it's still amidst the better offerings from Netflix's Original Films, but that's almost damning with faint praise as they're still a fair way behind their Big Screen siblings.