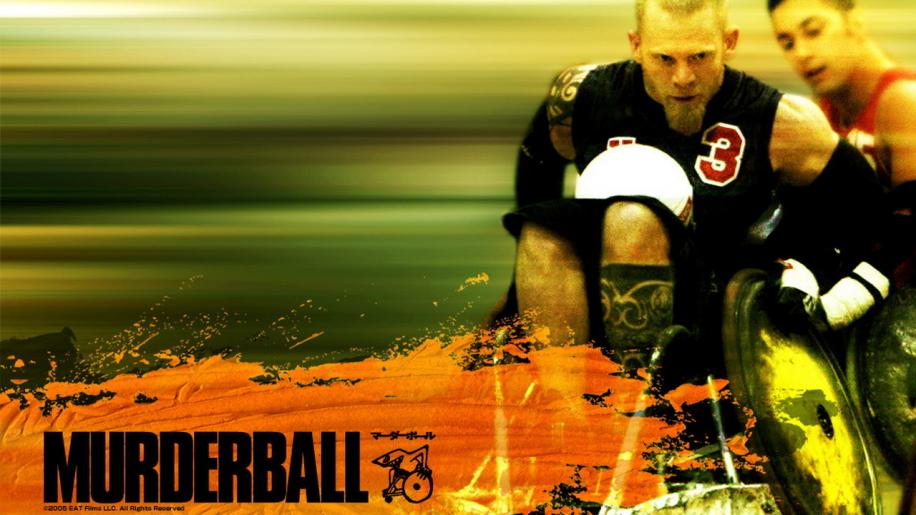 Imagine a four a side rugby team, composed of players with absolutely no fear of bodily harm, that are strapped into a manoeuvrable cage of death with both teams smashing into one another. Repeatedly. That's Murderball but it just so happens that the players are all quadriplegic. Murderball follows team USA and the coach of team Canada in their lust to win the gold medal, ultimately at the Athens Olympics. Any thoughts that this is another bland fly on the wall documentary with an overly sympathetic attitude to the disabled are quickly banished. The people that participate in this sport have a rare focus and determination that mark them as true athletes. Help with the shopping they do not need. What they need is a sport that is akin to mauling the opposition with a self propelled, wheelchair-battering-ram the likes of which Mad Max could only dream of. Luckily enough, Murderball fits the bill nicely.

Of course, if this were just about the teams there would be a reasonable but somewhat dull documentary in the making. As it is, there is plenty of infighting and back story to make this a thoroughly enjoyable watch. Easily one of the most engaging of the back stories is the feud between Mark Zupan and Joe Soars. Joe, after being dropped by the USA team due to his advancing years, decided to coach the Canadians instead as a gesture of ill will to the US team. This is a bit like Shearer coaching France after his stint at Newcastle; controversial to say the least. This ichor is focussed upon through out the movie and serves to build up the various USA vs Canada clashes that are portrayed.

Each of the main characters is visited during the documentaries run. Each has a genuinely interesting story to tell, but none more so than Keith. Keith, after a moto-cross accident, has lost the use of his legs and has limited arm functionality. For someone with an active sports life, the prospects of his future look bleak. A remarkably candid narration by Keith gives an insight to what it is like to be in his position, frustrations and all. At first he seems to be a little resistant to the treatment he is receiving. On the day he leaves, however, we see him receive a card from the nurses at the rehab centre. Keith has some trouble opening the card, but responds with “no, I've got it,” to one nurse's offer of help. This is just the beginning of that kernel of grit that the Murderball athletes have. Indeed Zupan visited Keith during the pre Athens build up with a rugby 'chair. Keith's eyes opened wide as the possibilities of a continued extreme sports event sank in. Just that glimmer of excitement was enough to just about turn his whole outlook right around.

It is the actual sport that counts in Murderball and there is no better example of this than the USA-Canada matches. Each time they meet there is only one or two points separating them with a genuine build up of tension normally associated with world class finals. As it happens, these are pre Olympic matches. When the Olympic finals are shown, the sides are well set up and the match reaches a whole new level of excitement. After I watched the last few seconds of the Olympic USA-Canada match, I realised that these people are quadriplegic make no difference at all. Actually I feel rather foolish in thinking that it would make a difference.

Bad points? I think that Joe Soars gets a bit too much of the lime light. He seems to be a rather abrasive character with anyone familiar with American Dad will recognise straight away. For sure he is a successful sports personality, but his opprobrium in the eyes of the US team casts a pawl over the movie. That isn't to say that Soars has a depressing influence, it is merely that the circumstances seem so petty to have spiralled so far from reconciliation. Still this is probably a reflection on the actual events and to call this a bad point is being a bit harsh.

So, if you want to watch a documentary about some of the most grounded, selfless, concentrated and focussed sportsmen there are, Murderball is it.