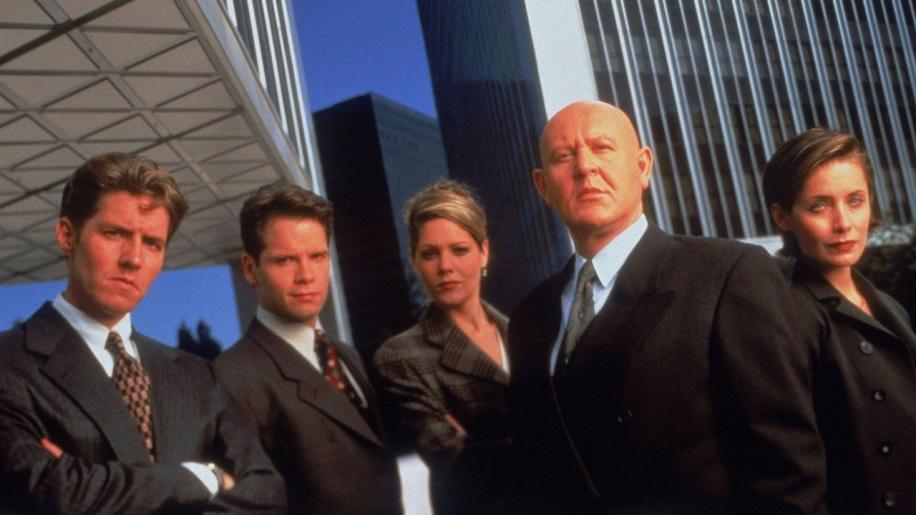 The show is presented in its full screen 1.33:1 aspect and, I have to say, that its looks pretty decent on this transfer. Colours are very good, very warm, leading you into an image that is quite sumptuous. Offices, courtrooms and clothes all have that highly-produced vibrancy that makes the picture very inviting. Skin tones are healthy - although they do seem to possess the Hollywood staple of far too much makeup - and blacks are particularly effective, too. Cells, interrogation rooms and the atmospheric moments of revelation in the courtrooms and the legal suites all possess a sense of depth that, again, draws you deeper into the story.

There is a smattering of grain about the image but this is nothing at all distracting. Some exterior shots exhibit glaring and shots of the outsides of buildings can suffer from hazing and occasionally bright shimmering. Edge-enhancement makes itself apparent, though again, I did not find this at all distracting, even on a large screen. Detail is fairly well captured - the reflections on Grasso's glasses, for example - and the image is consistently stable throughout the entire season, with all episodes passing muster and none falling below standards that I noticed.

Overall, this is a nice, crisp and warm transfer that is very pleasing to view. Better than the first season, to be sure. Well, to be honest, there is really isn't much that can be said about the Dolby Surround track for the show. It's clear, it's clean and it does the job that it sets out to do with no fuss and no mistakes. Sound is reasonably well spread over the front speakers, with some degree of directionality. The gunshots later in the show pack a meaty-enough wallop and we do get some widening-up of the soundscape, but this hardly total immersion we're talking about here. For a TV show, this sounds mighty fine indeed, though. Voices carry a decent weight and placement, the score is warmly dynamic without being overbearing, harsh or tinny and it retains a clarity that enhances the drama. Ambience is lent a small amount of support from the rears, which is nice - but they do sit out for most of the show. Case closed. All we get for this boxset is a 22.01 mins featurette entitled Final Verdict: Season 2. Now, to be honest, this is quite a valuable and misty-eyed look back upon a show that proved a milestone in some people's careers. We get participation from director Randy Zisk, producer Marc Buckland and actors J.C. MacKenzie, Mary McCormack, Barbara Bosson and D.B Woodside. Everyone recalls the show fondly, and are proud to have worked on it under the expert wing of Steven Bochco. MacKenzie is the best of the bunch, just as he was last time around in a similar featurette for the first season. He is candid, honest and shoots his mouth off in a self-deprecating manner, his goofy charm a natural extension to his performance as the most personable member of the legal team. That he and Mary McCormack (who looks divine, by the way) were fellow New Yorkers and both broke before joining the cast of Murder One explains not only the joy and surprise they felt at the show's success, but also the pain they felt at its enforced demise. They, and the makers, all feel that the drama could have run and run. Marc Buckland asserts that there was actually less pressure put upon them this time around than during the first season, so they had more freedom to mix up the style somewhat and this, in turn, allowed for a more relaxed set. In fact, only D.B. Woodside felt any kind of pressure as the new kid on the block. Everyone, of course, is unanimous in their praise for Anthony LaPaglia (they quite annoyingly pronounce Anthony with that American-style thuh in the middle of it), who sadly does not contribute to the feature.

The survivors of the show explain the snowballing effect of bad scheduling (going head to head with Friends didn't help), diminishing ratings and the low-attention span of the American viewing public - despite the change of format from one huge case to three smaller ones - for Murder One's cruel denouement. They are wistfully pragmatic about the sad inevitability of the outcome and this comes across convincingly - very little in the way of the standard pap here, folks. There's a nice mention to show-stealer Pruitt Taylor Vince too, from all concerned. There are a lot of clips from the show playing throughout the featurette, but they often have the contributors talking over them with fact, trivia and anecdote, so you don't get the feeling that the mini-doc has been merely padded out. Which is nice.

So, despite the brief running time, I feel that this is a bonus definitely worthy of your time. Just a shame that there couldn't be a bit more in the way of extras. Or another entire season of Murder One, for that matter. Murder One was a great show. We'd all seen legal dramas before, with all the last-minute evidence, knife-edge verdicts and convoluted character-play given due process and their appropriate day in court, but Bochco's revolutionary storytelling enabled us to become more immediately embroiled within each and every case. As with the first season, the writing is brilliant, the acting terrifically assured right across the board and, more importantly perhaps, the moral conundrums given a sly tweak that allows vast swathes of murk and intrigue to convincingly play out within the drama, clouding the integrity of one and all. Still a bold move, folks. Anthony LaPaglia is tremendous. He had a hard act to follow, but he sure managed to stamp his own claim on the proceedings with style and presence. A true shame that Murder One, itself, was sent down after this second run. But, at least, you can savour it here on DVD.

Fox' s release has a pretty decent performance, AV-wise, although it is woefully lacking with regards to extra features. The featurette is good but, on its own, it amounts to little more than being a post-script to a show that has long since died. But, as with the pioneer season, it's the show that comes first, therefore I have no hesitation in recommending Season 2 wholeheartedly.