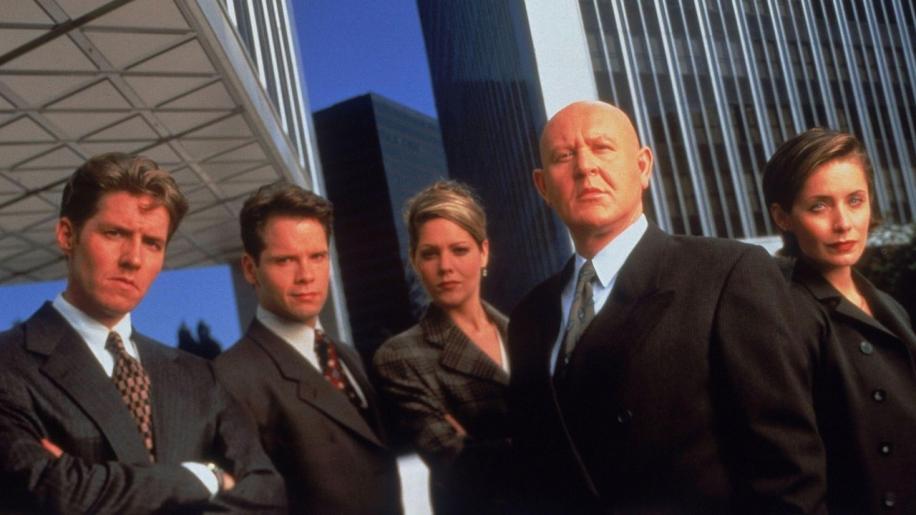 The full-screen 1.33:1 image for Murder One is sadly afflicted with many problems. Starting with grain, which surfaces often and sometimes with a serious vengeance in some shots - particularly the plush interiors of the law offices and most often against certain characters' jackets, for some unknown reason - and print damage of the fleck and speckle variety. There is an occasional faintness or blurring around some mid-ground objects and there is copious shimmering on some detail, such as office blinds, street reflections and, most notably the many external shots of the office block that usually denote where a commercial break was once situated. There is some hazing in the back of the courts, and some chapters suffer an unwelcome colour smearing along edges, and a lack of clarity on backgrounds, in general. Now, of course, a lot of this is to be expected. It's TV, it's from the nineties and it quite clearly hasn't been cleaned up for DVD - but still, a show of this calibre deserves better. I even detected an occasional sideways motion drag in certain episodes, evidence of artifacting and some slight blocking in the darker corners of the image, as well as heaps of edge enhancement.

However, all is not lost. The black level is reasonably strong, adding to the atmospherics of the legal suites. The colours are quite well rendered, warm and inviting, and the disc copes quite nicely with scenes in subdued light - a little bit reminiscent of the visual look of the Batman Animated show, at times. There's no use of fast-cutting or any pyrotechnics on display, so the disc is given a fairly sedate workout with regard to visual dexterity. Close up detail is actually very good - eyes and teeth sparkle, craggy jowls are well etched etc - and contrast changes are pretty well handled, such as the team leaving the dimness of a building into the camera-flashing maelstrom of a paparazzi feeding-frenzy.

This may all sound quite lousy, and it is by DVD standards - but this should still not cloud your judgement on whether or not to obtain this release. There's nothing here that ruined my enjoyment of this show. Well, what can I reveal about the Dolby Digital 2.0 Surround Mix? Not a lot, I'm sorry to say. You can hear it, it's clear, and the dialogue and score (that eloquent minstrel jingle by Mike Post) are never fumbled, swamped or distorted, but there is absolutely nothing exemplary about this track, whatsoever. The show is dialogue-based and offers nothing for ambience, bass activity or whipcrack-away sound steerage. But then, it was never meant to, was it? So, I can't possibly complain, and nor should you.

That's it though, folks. There's not much asked of the mix, but what you get is delivered pleasantly and accurately. Murder One has two chat-tracks - one supplied by actor Jason Gedrick that runs over Chapter 8 and one from director Randy Zisk on Chapter 15. Gedrick's commentary is extremely laid back, the guy sounding very chilled indeed. Clearly in awe of Daniel Benzali, he chuckles his way through the episode, offering some insight into his character of Neil Avedon, but basically just enjoys the chance to reminisce. He likes to mention the subtlety of looks and what they mean, and the manipulation of emotion. But mainly he likes to giggle and mellow out. “Deadbolt ... it's so perfect,” he drawls.

Randy Zisk's commentary reveals that this chapter was the first of three he directed for the show and he is keen to point out how he tried to mimic the visual style and intensity of the pilot. He talks a lot about lenses and wide angles and long angles but really he seems just as determined to lavish praise upon Benzali, too. I must admit I got a little irritated with the number of times he said the words “intense” and “powerful”, though. Given the passage of time since he made the show, it's understandable how he takes an overview approach of the season in general.

The main extra, however, is the featurette on Disc 6, entitled Making The Case: Season One. Running for 25.16 mins, and in three chapters, this is a great little retrospective making-of. We get lots of talking head soundbites from Gedrick, Zisk, McCormack, Bosson, Mark Buckland (one of the producers) and, thankfully, good old Daniel Benzali and there is some wonderful and amusing stuff here. McCormack is on fine form - listen to her scratching her thigh! Bosson, who was married to Steven Bochco at the time, reveals that she modelled Grasso's character on David Schwimmer's mother and Benzali actually gets all emotional! The rock actually crumbles! It would have been nice to have heard from Bochco but, all in all, this is a brief but well-stocked little featurette that does, at least, attempt to cover all bases from legal advice to cinematography and lighting to having to kiss gorgeous girls every episode. Nice work if you can get it. Sadly though, there is no input from the delectable Grace Phillips. D'oh! Never has the term Verdict been more appropriate than with this phenomenal boxset. Well, the jury has returned and the verdict is a resounding success. This show drips class, with a spectacularly labyrinthine plot, highly complex and engaging characters and a sheer style that literally demands your continued, and avid, attention. I have to tell you that, having viewed this entire season in mammoth nightly sessions, I'm kind of sorry to let it go now. Season 2, I have it on good authority, is not a patch on this, and that kind of rankles as I really feel the need for more of Benzali's Ted Hoffman. Apparently, he isn't even in it!

The chat-tracks aren't up to much really, but the brief retrospective featurette is certainly on the ball. In only twenty-five minutes, it still delivers a wealth of information and allows some of these great actors the chance to open up and recall the show that put many of them on the map. The AV quality is a letdown - but that is absolutely no reason to put you off purchasing what is possibly one of the best television shows that has ever been produced. I'm loathe to use the term “classic” so glibly, but with Murder One, I feel wholly justified. This show might not have made legal history, but it sure shook up the format for network television with a courageous, and determined, unique new style, the influence of which still glues viewers to the box in their millions today. Without Murder One, it is unlikely that epic story-arcing shows like 24 or Lost would get off the ground.

Thoroughly excellent show and totally deserving of a place upon your shelves.