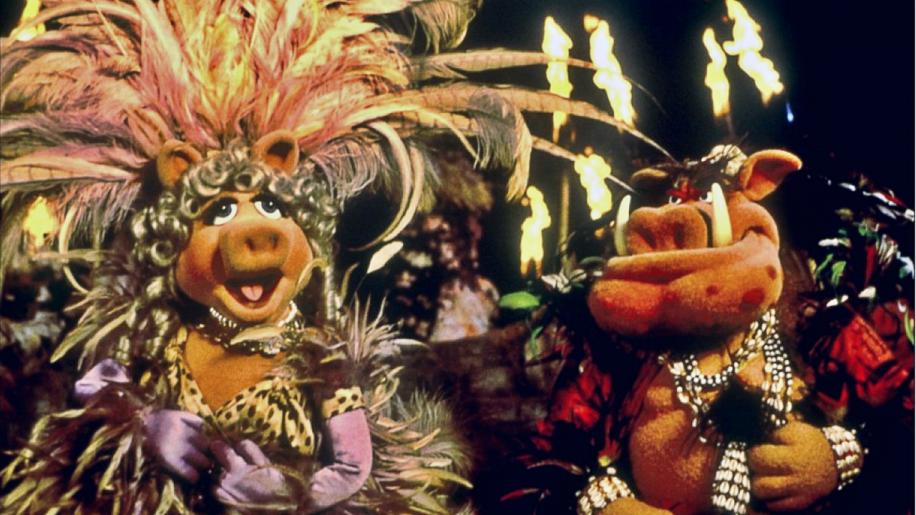 Celebrating Kermit's fifty years of “Bein' Green” - has it really been that long? - Disney DVD have re-released the Muppet movies across the world and all its regions in, wait for it, anamorphic widescreen. At long last, I might add. Now, as a long-time lover of The Muppet Show, I've had to admit that they haven't always translated too well to the big screen, their early outings being quite appallingly unfunny - the sight of Kermit riding a bike in The Muppet Movie, notwithstanding. But, when it comes to adapting established stories, and hurling the cosy-furred critters into them with pantomimic gusto, they have certainly found their niche. The Muppet Christmas Carol was a simply outstanding movie, in every way (yep, even having Michael Caine sing!) and, to my mind, one of the best versions of Dickens' classic tale that the screen has so far offered. The relatively new Muppet Wizard Of Oz has its moments, too. But, here, it is my pleasure to review the R4 Australian release of Muppet Treasure Island, Brian Henson's take on the immortal story Treasure Island by Robert Louis Stevenson and, once again, the team have retained the essence of the yarn whilst injecting enough of their own brand of wacky humour and inimitable characterisation to give a full-blooded, please-all version that never once outstays its welcome. A colourful, bawdy romp that can't fail to entertain.

With a screenplay by Jerry Juhl (who also adapted The Muppet Christmas Carol), Kirk R. Thatcher and James V. Hart (Bram Stoker's Dracula), the original story is pretty faithfully adhered to. Once again, bored young Jim Hawkins (played here by man-faced sprog Kevin Bishop) longs for adventure across the high seas. After his father takes off towards the distant horizon, the young dreamer listens with envy to the stories and shanties belched out by drunkard Billy Bones (a guest spot from Billy Connelly) at the old Admiral Benbow inn, which is strangely populated by pigs, these days, and cannot believe his luck when the old buccaneer's fabled treasure map ends up in his possession. So, narrowly escaping the clutches of Blind Pew (who looks like something out of Terrahawks - remember that, anyone?) who is intent on procuring Billy's old map, Jim, along with loyal chums Gonzo and Rizzo the Rat, hires the good ship Hispaniola and sets off to seek the fortune indicated on the withered old parchment. Of course, of all the ships tied up at the harbour, he has to go and pick the one with a certain one-legged pirate posing as the cook, doesn't he?

With Kermit taking on the role of the noble Captain Smollett, Sam the Eagle (one of my favourite Muppets) as his stern Second-in-Command, Mr. Arrowe, Tim Curry as the eyeball-rolling, brine-blooded rascal Long John Silver and a ship full of familiar fuzzy-faces including the awesome Sweetums - who actually gave me nightmares when I was a kid - the course is set for riotously-ribald behaviour, some incredibly naff songs and a smartly-played and spirited sea-faring grin-fest featuring all of the usual suspects. Having the perennial hecklers Staedler and Waldorf as the Hispaniola's grumbling twin-figureheads is a cool notion, their barnacled barbs adding salty sarcasm to the script. I love the way that Mr. Arrowe applies an aggressive interpretation to all of Captain Smollett's rather more lenient commands - “Er ... I was just paraphrasing, sir,” - and the uncanny way in which his deceptively granite-set face can alter expression just by the degree to which the puppeteer's open his mouth. Gonzo and Rizzo don't act as narrators this time out, but their skittering about the baseline of the camera is a practically constant companion-piece to the movie. Check out Gonzo's perversely sadomasochistic streak when tortured below-decks. And it's nice to see Animal and the band supplying some musical accompaniment to the voyage, too. Kermit, however, is simply Kermit in a Naval uniform, his un-altering persona completed when he discovers Miss Piggy on Treasure Island. As the wayward Benjamina, the lover he jilted at the altar when the high seas beckoned, she appears to have worked her way through many more of the cast before finally being adopted as the Queen of Treasure Island's tribe of native boars.

“You're a frog. You're supposed to have cold feet.”

But any version of Treasure Island has to be measured by its portrayal of Long John Silver and, in Tim Curry, we may have a decidedly less-sinister incarnation, but that doesn't stop his scenery-chewing with grinning, throaty-voiced relish. He manages to walk the fine line between arch villainy and pure pantomime with agreeable conviction and style. Far better suited to hell-bent, treasure-obsessed piratical zeal than humbled, soul-searching father-figure to Jim Hawkins, Curry (whose crowning moment was as Darkness in Ridley Scott's under-achieving Legend) definitely looks and acts the part amid all those puppets with considerable aplomb. With him in the role, the danger was that the character would lapse too swiftly into overtly camp excess, but he manages to avoid such pitfalls by the skin of his wickedly grinning teeth. Even young Kevin Bishop - who keeps on reminding me of Mel Gibson, for some reason - handles performing amid a welter of Muppets with dignity and charm. Although, it's a different story when he sings - these being opportune moments to fast-forward a little bit. The relationship between Jim and Long John Silver is one of literature's greatest, and most difficult, things to pull off accurately and, obviously, in a Muppet version we can hardly expect the appropriate twisted emotions, heartrending guilt and betrayal, and then its ultimately unique mutual-understanding (in fact, I was surprised at how brilliantly Disney's under-valued Treasure Planet coped with it) and, barring only a few quiet moments of tender bonding, the film wisely opts to ditch such sentimentality. Silver may have some love for the erstwhile, brave and thoroughly decent Hawkins, but the Muppet screenwriters prefer to have him remain primarily as a rogue. Albeit, of a considerably less-cutthroat variety.