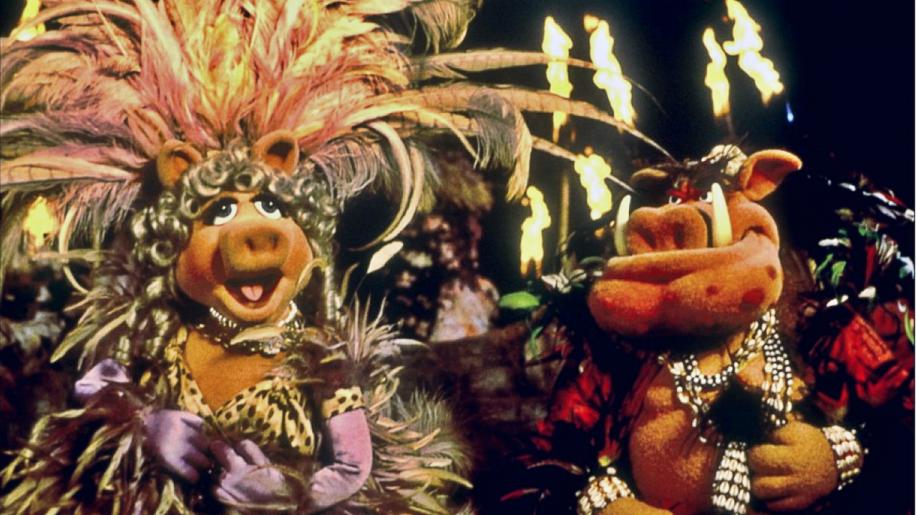 Well, there's a lot of good stuff to mention here. And a little bit of bad, too. Firstly, as I mentioned at the start, the image is now a resplendent anamorphic widescreen 1.85:1 and this, alone, should perk your interest. It is, indeed, a rich, warm and inviting picture, presented with stability. Colours are very good for the most part. Costumes and sets look vibrant and betray no bleeding or over-saturation. Certainly, the warm hues within the inn and on-board the ship look splendid, with fires and lanterns etc striking a realistic glow. Treasure Island looks wonderful with great foliage and flame-lit walls and rocks. Skin-tones for the few humans are very good and detail is very well established in close-ups - the stubble on Billy Bones, and the swarthy tan and devilish gleam in the eyes of Long John Silver. But the thin layer of grain that bedevils the image is also far more apparent on the faces of the human cast, too. Some distance shots - like the ship at sea, or the sky show up the grain, as well.

Black levels are very smart and deep, offering heaps of shadow and atmosphere. Check out the night-time scenes in particular - there is some great moonlight glinting off the rooftops and the cobbled streets amid the gloom. Below-decks on the Hispaniola, also, provide ample evidence of good contrast and well-rendered blacks - the apple barrel and the torture scene, for examples.However, it is the daylight scenes that don't look as crisp. Although still full of colour and detail, they just appear a little, well, jaded. But, I wouldn't put this down exclusively to the DVD transfer. I think it has more to do with the film's use of small enclosed sets without any natural light that has exteriors, such as the harbour scene, looking artificial and muted. But, reassuringly, the transfer has no problems with dot crawl, pixilation or blocking. Only some edge enhancement is encountered - but this is nothing to spoil the show. The DD 5.1 track on Muppet Treasure Island is really rather subdued and a bit of a disappointment, to be honest. I had to crank up the volume a fair bit to provide any kind of substance to the mix and, even then, the results were considerably below-par. Explosions lack power and depth, and although the score comes in from all around, is possesses no presence and just falls flat. Dialogue is still clear and never muffled or submerged, but it is hardly threatened by the effects or the surround steerage in any way. Directionality was fairly well achieved across the front soundstage, although there were no particular examples to mention directly. The rears are active but not to any great, or especially involving degree other than general ambience which, to be fair, was quite well handled - the sloshing of the sea, the whistling wind outside the old inn, the babble of the dockside voices and activities and the busy crew about the ship.

One great moment comes when Miss Piggy is introduced by her tribe of boars, when the bass finally tries to let rip with some pounding percussion. But again, this is kid-friendly acoustics, folks and lacks dynamics right across the board. Still, you can't beat a good set of bongos ... erm, hang on a mo' - that's exactly what you do with them isn't it? Well, you know what I mean.

So, overall, not exactly the most immersive of 5.1 soundtracks, but then the film probably doesn't require it, anyway. When all said and done, so long as you turn it up a bit, you are still going to enjoy Muppet Treasure Island whether its effects whiz-bang their way around your living room, or not. This Anniversay re-release sees the addition of only one extra. Called Backstage Disney: Pepe Profiles Presents - Fozzie Bear: A Long Day's Journey Into Nightclubs (phew - the title's longer than the featurette!) this meagre bonus sees Muppet TV celebrity Pepe very briefly charting the stand-up comedian career of Fozzie Bear. With interviews with Kermit et al, this un-timed (though it can't last more than four or five minutes) extra is totally unfunny and utterly un-worthy of adding to this release. I mean doesn't the original R1 have commentaries and making-of's, as well? Well, I know I don't like Fozzie Bear, but this little snippet still stinks. Dross, I'm afraid.

However, I should mention the menus, which are quite cool. Accessing the Special Features has Gonzo and Rizzo dragging the new menu screen on, and then they hang around in a distinctly more amusing fashion than the featurette itself. Stick with their antics instead. Typically entertaining fare in that infectious Muppet style. A good story, no matter who is at its reigns, Treasure Island is ripe material for serious interpretation, or send-up. This one is thoroughly enjoyable, despite the songs. A spirited romp for kids of all ages.

The disc has a great picture, but lacklustre sound and a dearth of bonus features. However, the film is what I'm recommending ... and I do so without reservation.