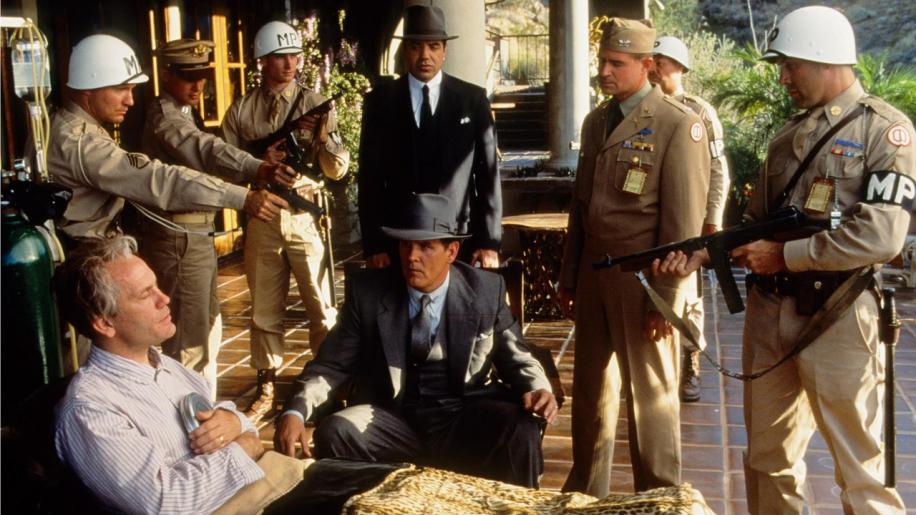 In 1950s LA, four snappily-dressed but ruthless cops work with the complicity of the local police commissioner to stamp out organised crime. The leader of the 'Hat Squad', Max Hoover (Nolte) isn't averse to throwing criminals off cliffs, injecting them with their own dope or roughing up other cops, and the four joke about how they really ought to stop killing suspectsBut Hoover starts to fall apart when a girl with whom he was involved (Jennifer Connolly, as gorgeous as ever) is found dead in a quarry. Investigating her sleazy lifestyle, Hoover is soon mixed up in a conspiracy which involves dirty movies, the FBI, the army and the Atomic Energy Authority, and soon begins to question whether the lethal tactics he uses against criminals are justified when they are used in the defence of national security.
Mulholland Falls almost works as a gritty, realistic crime/political thriller in the vein of Chinatown and LA Confidential. It certainly looks great, with an impressive level of period detail (right down to the tie-pins and worn wallets) and a strong central group in the four members of the 'Hat Squad' ­ Nolte, Palminteri, Michael Madsen and Chris Penn. It's no wonder that the director, Lee Tamahori, who made the excellent Once Were Warriors, went on to work on cult Mafia TV series The Sopranos.
But the problem with Mulholland Falls is that the plot develops on a predictably linear pattern, and there are none of the twists and turns we now expect after watching movies like The Usual Suspects. There's no real attempt to develop the Penn or Madsen characters, and Melanie Griffith is landed with an under-written role as Hoover's wife. But the real disappointment is the way in which the spectacularly upholstered Jennifer Connolly is wasted in a relatively tiny part. In a just world, the underrated Connolly would be doing more than just playing the odd bimbo role (though we wouldn't want to discourage her from shedding her clothes at every opportunity). In the end Mulholland Falls just doesn't tackle all the ethical and character questions it raises. It's a fair time-passer, though.