Powerful system for a decent price, but don't expect it to be cool and quiet! 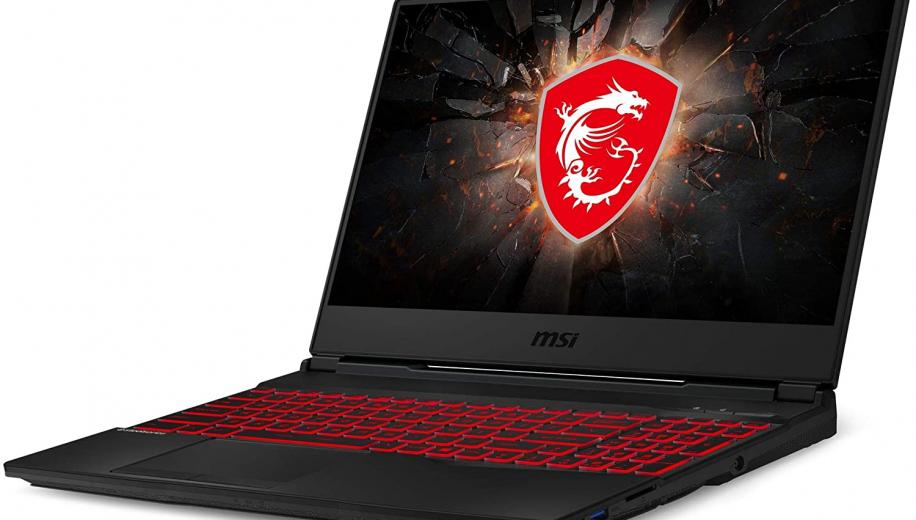 What is the MSI GL65 9SD Gaming Laptop?

We’ve had quite a break in reviewing gaming laptops here at AVForums with our last one being MSI’s 17” GT72VR GTX1070 based laptop way back in April 2017. As expected, technology has moved on leaps and bounds since then and we are now into the 20 series Nvidia GPUs together with 10th Gen Intel CPUs.

The humble gaming laptop still mostly looks the same, it’s just very different under the hood. As we saw in our last review, thanks to the introduction of the 10 series Nvidia GPUs and now the 20 series, the gaming laptop is no longer a poorer cousin to the desktop. The healthy mobile GPU performance boost these chips received allows for a much closer comparison with the similar grade desktop GPU.

The first thing that should draw your attention with this laptop is the thin design. Gaming laptops used to be chunky beasts, often heavy and making them a device you didn’t really want to have on your lap. Here, the GL65 9SD is not only very thin, measuring just 27.5mm thick, but thanks to the thin bezel design the overall size is what you would normally expect to see with a 14” laptop, with a footprint of 358mm wide x 248mm deep. It’s also lightweight, coming in at just 2.3kg.

The overall design is very understated with just a couple of nods to the gaming pedigree under the hood. The case is all black with an illuminated MSI Dragon logo on the top and the keyboard features a single-colour red backlighting. Whilst being a thin and compact 15” laptop, it does thankfully have the full NUM keys. The GL65 9SDK version of this laptop features MSI’s SteelSeries per-key RGB lighting allowing you to customise each key to your liking, but that doesn’t appear to be widely available in the UK unfortunately.

The connectivity options are generous and should cover most modern bases. To the left we have the gold-plated Mic-in and Headphone-out connections along with 1 x Type-C USB 3.2 port, 1 x Type-A USB 3.2 port, Mini-Display port, HDMI (4K @ 30Hz) and network connection. On the right side we have the rather chunky power connection, 2 further Type-A USB 3.2 ports and an SD card reader. With a nod to the streaming, downloading and disc-less world we now live in, no DVD drive is fitted. No connections to the rear which is taken up by the cooling vents and to the front we just have three indicator lights.

The GL65 9SD features a 15.6" FHD 1920 x 1080 resolution 120Hz IPS-Level display. No G-Sync or Free-Sync technology here unfortunately. The matte display works well in keeping reflections to a minimum and the viewing angles are superb. Whilst only being a 1080P display at 15.6” the quality is good with bright colours, clear and crisp text giving an overall quality image that won’t disappoint.

Using SpectraCal software and our C3 Colorimeter, the maximum screen luminance was detected at 260.0cd/m2. MSI have partnered with Portrait Displays, the company behind SpectraCal and claim that each panel in an MSI notebook comes with the finest precision in colour.

Many thanks to SpectraCal for providing the software and C3 Colorimeter we use for our reviews.

Thankfully most manufacturers seem to be keeping their systems fairly trim these days, no endless amounts of pre-installed software clogging up the system and no pre-installed anti-virus that you don’t want or need. That continues to be true here with the GL65 apart from Web Companion by Adaware which comes preinstalled.

As we’ve seen with previous MSI laptop reviews, the system is all controlled by their Dragon Center. From here you have the System Monitor which gives quick access to system information such as CPU usage, disk space, network usage and fan speed to name a few. System Tuner which allows you to change the fan speeds, mouse DPI, performance level, sound settings and the display RGB settings.

We then have Battery Master which gives information on the battery such as charging level, charging setting and battery calibration. Then we have voice boost, which gives settings for VOIP usage, Mobile Center for connecting a mobile phone to the laptop and a Tools and Help section. Lastly we have the Gaming Mode. This mode optimises the system performance and provides auto-tuning functions for various popular games such as PUBG, Rocket League and Apex Legends for example.

Outside of the Dragon Center, we get the MSI App Player which allows you to run Android Mobile Applications and games on the laptop, MSI Driver and App Center which offers an easy way of keeping all your drivers and Apps up to date and lastly, the Nahimic software which allows fairly in depth control of the sound settings.

The audio is ok, that's about the best we can say about it. The various sound settings in both the Dragon Center or Nahimic software only really change it to be different versions of the same average quality. It has all the hallmarks of audio from tiny speakers, which is what it is. If you are gaming on this or listening to music, then headphones are required.

Our standard tests are each run at least 3 times, with the average score taken. The tests were all carried out with the laptop in sport/high performance mode, mains power plugged in and the screen set to 1920 x 1080 resolution and Nvidia 442.74 drivers. The GTX1660 Ti uses Nvidia’s Turing technology with 1536 pipelines, a core clock of 1455-1590Mhz, memory speed of 12000Mhz and has 6GB of GDDR6 memory.

As you can see in the results above the various benchmark tests showed the system performed at an average level that would be expected with this hardware, it didn’t set the world on fire with any of the scores.

As for the gaming tests, the latest Call of Duty Modern Warfare offered an excellent 117FPS on high settings and Apex Legends performed similarly well on high settings with 75FPS. Battlefield 1 on the other hand could only manage 48FPS which was far lower than expected for this GPU, although given how buggy this game is that result should be taken with a pinch of salt. The disappointing, although not surprising result was that under battery power the FPS in COD dropped to just 30FPS, 36 FPS in Apex and 41 FPS in Battlefield 1, despite battery boost being disabled in the Nvidia settings.

With the continuing improvements in power usage and battery life seen with the 9th Gen Intel CPUs and the new Nvidia GPUs, battery life on gaming laptops is still relatively poor. To get the most out of a gaming laptop you ideally need to have it plugged in. But for gaming on the go, it did last 50 minutes and, as the system restricts the settings, it runs fairly quiet too.

If you are a fan of gaming laptops, then you most likely will be used to gaming with the power plugged in, but for those thinking that they can buy a high spec gaming laptop and game in high settings on the move, then unfortunately you will have to think again.

The GT65 9SD uses MSI’s Cooler Boost 5 technology with dedicated thermal solutions for both the GPU and CPU giving a total of 7 heat pipes which they claim will offer maximum performance during extreme gaming. During our testing the fans were clearly audible, especially during intense benchmarks and gaming. Thanks to the heat being expelled from the rear and side of the laptop rather than underneath it shouldn’t roast your legs like some gaming laptops we’ve reviewed, but there is still a significant amount of heat from the underside and it is uncomfortable to have on your lap after just a few minutes gaming.

Using HWMonitor, during our benchmarking and gaming test sessions the CPU core temperatures at idle were 46°C with the GPU sitting at 43°C and under test conditions the CPU reached 100°C with the Nvidia GPU reaching 78°C.  The loudest the system fans reached under heavy load was 43dB.

Currently available for around £1200, the MSI GL65 9SD offers up a tasty combination of specification and performance. It features a 9th Gen Intel i7 CPU, Nvidia 1660Ti graphics, 16GB of RAM and plenty of storage in the shape of a fast 256GB M2 SSD and 1TB HDD. Coupled with a good quality 1080P IPS 120Hz display, sensitive thin and lightweight design, generous connection options and minimal but still useful onboard software, it offers everything a PC gamer on the go might need.

Gaming performance was good showing the laptop could cope with the latest games on high settings. Using battery power only, the system gave severely reduced frame rates across the board and could only manage 50 minutes with a full battery. Other negatives were poor audio, significant heat with the CPU sitting at 100°C under load and, as you would expect from that, the fans on high to try and cope with it.

As for alternatives, gaming laptops are now a very common item and ever since the 10 series Nvidia GPUs were released, you can get a decent gaming laptop without having to rob a few banks first. For systems with a 1660Ti GPU and i7 CPU, there are plenty of options such Scan’s own 3XS laptop with a better 1TB M2 SSD for £50 less and the Asus ROG GU502GU with a better 240Hz display and 512GB M2 SSD for around the same price as this MSI. Weighing it all up, the MSI GL65 9SD offers a good specification and performance for the money, although it isn’t all sunshine and roses.