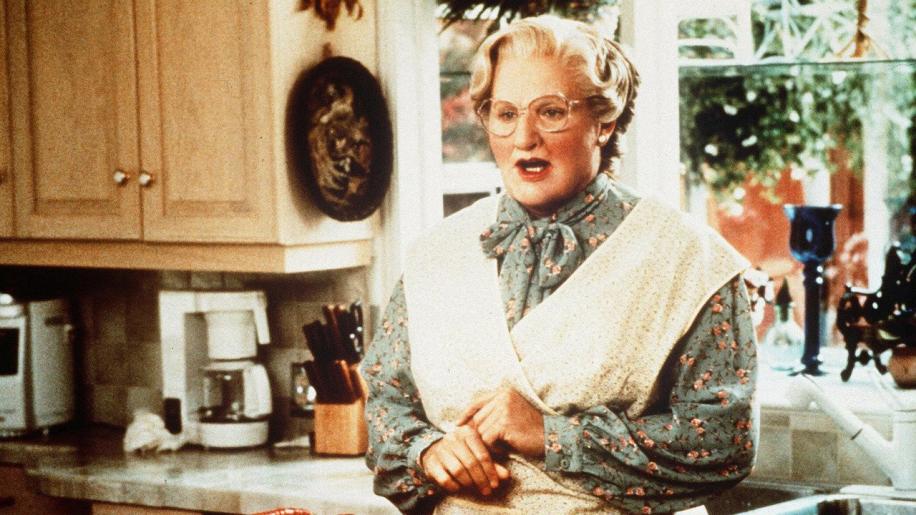 Curiously, for such a fast-talking, hyperactive comedian - the guy who starred in the quirky TV series Mork and Mindy - Robin Williams has done some of his best work in serious dramas. Whether rocking the airwaves with his political commentary in Good Morning Vietnam, fighting for his patients in Awakenings or inspiring students in both Dead Poets' Society and the superior Good Will Hunting, the man is still playing characters that are smart and occasionally witty, but with a serious edge. Even his bad guy roles have been pretty convincing, from One Hour Photo to Insomnia. In terms of outright comedies (or ostensible kids' movies) - arguably what he is famous for - his work has been much more... questionable. Jumanji? Bicentennial Man? Toys? The list is fairly big and many of them are quite lame, often making you wonder whether this is indeed the same man who did all of those aforementioned dramas. Still, sometimes he hits the right notes with more comedic works, even if they are still designed basically to entertain families and the younger generation, and Mrs Doubtfire was probably one of his best efforts in this respect.

Daniel Hillard is losing his family. The messy split with his wife - and subsequent custody that she was awarded - has made it extremely difficult for him to actually spend any quality time with his three kids, so he puts together an elaborate plan to get closer to them: he cross-dresses up as a frumpy old babysitter and pretends to be their nanny. Seems like a pretty crazy plan, doesn't it?

Mrs Doubtfire, despite it's ludicrous premise - which offers up the potential for lots of silly comic moments - is actually quite a touching family drama at heart, coated in wisecracks and Robin Williams' eccentric manoeuvres. It tries to show just how far a father would go to win back the hearts of his kids, and in this respect it actually succeeds quite well. Sure, we're not talking Kramer vs. Kramer here, this is still ostensibly a comedy, but it stands the test of time because beneath its witty facade there is actually a decent story going on, something which I'm sure plenty of people can relate to. Whether it be Williams' alter-ego getting closer to his kids beneath the clever disguise, or sniping at his ex-wife's new love interest, it is quite realistic and revealing if you can look past the gags. Of course, that would entail pausing to stop laughing, and there is quite a lot to laugh about here. In the era of Home Alone, the movie ran the risk of damnation by association, but I think it just escapes this by offering up less cheese and more honesty. Beneath all of his idiocy and all the sight gags, this is still about someone trying to do the right thing by his family, and it is perhaps this aspect that allows Robin Williams own personal brand of comedy to ring slightly more true.

Williams, as I've stated, is quite an underrated actor, as is more evident recently with his diversification into meatier, challenging roles. His choices have occasionally been dubious - particularly on the comic front - but Mrs Doubtfire allows him to offer up a bit of both sides of his range, with the bias clearly on the silly voices and cross-dressing comic antics. And whilst it may not stretch his talents, at least he does not phone-in the performance, instead offering up one of his better comedy-drama roles. Alongside him we get Sally Field, Burt Reynolds frequent partner-in-crime, who suitably conveys the disappointment of the struggling wife and mother - who too is trying to do the right thing, whatever that might be. There's also a fairly early role for Bond 5, Pierce Brosnan, playing the smarmy new love interest who gets his comeuppance from the sneaky Mrs. Doubtfire.

Mrs Doubtfire marks one of the better Robin Williams “comedies”, probably largely due to its underlying seriousness and the family struggles that hold the gags together. Packed with hilarious moments, it still has a heart and, even after fifteen years, manages to entertain in a warm but not too sickly-sweet fashion. And with the basic premise having been copied in several movies since (not least Big Momma's House) you still find that you really can't beat this version.