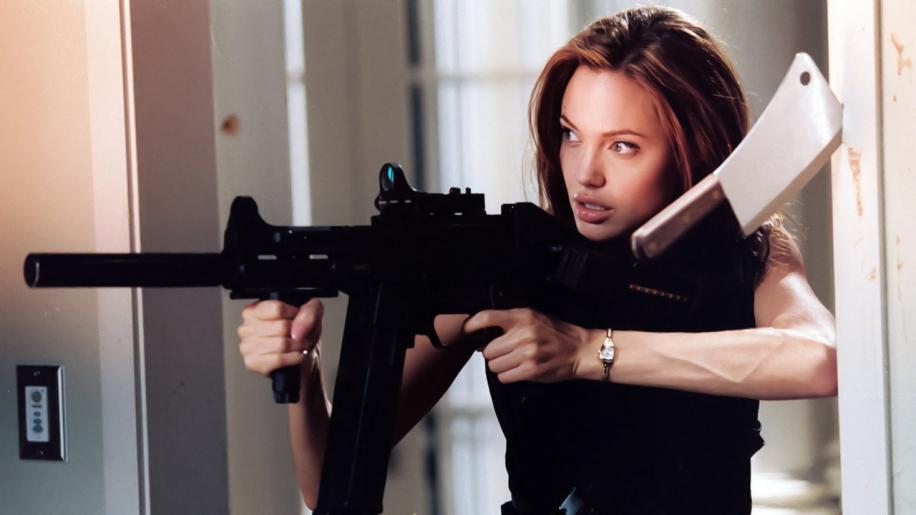 Ahhh, married life eh? Now I don't know if you could call this an action movie with a romantic theme, but I have to say it's more like a romantic movie with a lot of action. Meet the Smiths, John (Pitt) and Jane (Jolie), the former works in construction and the latter works in computers. Well, that's what they tell everyone, including each other - when actually both are assassins who are hired by different agencies to undertake the required work. Married life for them however is a drag, as the above quote taken during the opening scene of their therapy illustrates. However, during a particular hit, their paths cross as one basically ruins the others target, although at this juncture they are still oblivious. Of course, after it all goes pear-shaped, they are quite rightly ticked off and have to find out who caused them this error, which of course goes down like a lead balloon. Cue numerous attacks on each other, from dinner time fiasco to elevator death traps, we follow their attempts at eliminating the competition (which they have been tasked to do) throughout the entire movie.

I wish, oh how I wish, I could write more of a synopsis than that, but that's the movie in a nut shell - we're a couple, oh we're assassins really, oh we've found out, oh let's kill each other. OK I'm omitting the ending part, but is it me or does it sound a little like War of the Roses, only with move guns and ammo and less black comedy? Well, it is actually quite funny in its own way, with John taking the brunt of the punch lines, from Jane planting her foot in his lower extremities after he's kicked her repeatedly in the stomach to her revealing she slept with 312 men (some were 2 at a time), the barbs certainly fly as much as the ammo does. While the first half of the movie concentrates on establishing the marriage, their jobs as assassins and how skilled they are in their profession, it still has a few action scenes - John and Jane both performing a hit and then the sequence of the hit gone wrong, but once we get to the scene where they go hell for leather in their home, it switches gear and becomes more action-oriented, but still with some of the one-liners intact, although these one liners have more in common with Barbara Rose than Arnold Schwarzenegger et al.