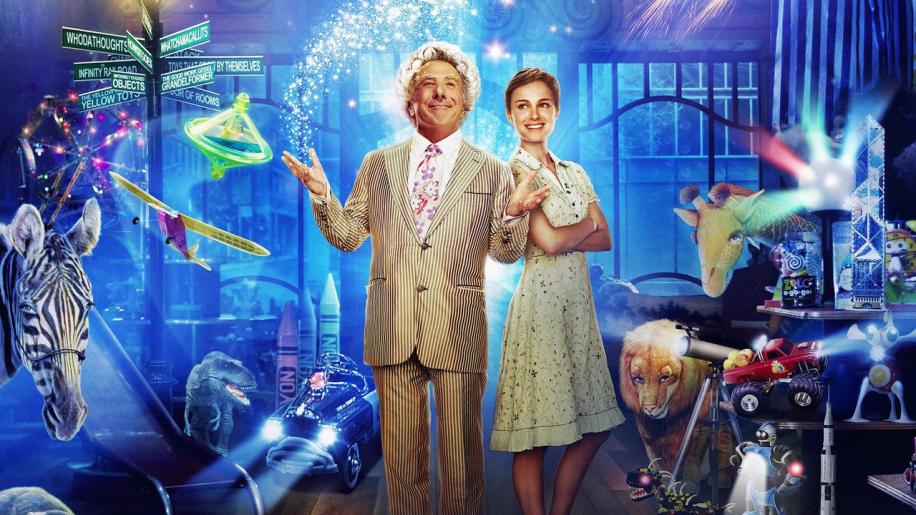 An intriguing premise for a movie this, and one that seems to be wanting to update a well known and loved children's tale for a new generation. Let's see if the idea sounds familiar. Mr. Magorium has been running his shop for many years. 237 years. However, it is time for him to leave and he decides to find someone to take over the running of the store. However, his chosen successor is reluctant indeed to take on the mantle, and the shop itself also has other ideas. Can Magorium successfully pass the store on, or will circumstances conspire against him.

Whilst the plot is admittedly quite original, the whole central concept of a magical character in charge of a domain with its own personality is so very much like a certain man with a confectionary factory. That book and film, of course, has held sway over children and adults for many years, with first Gene Wilder and then Johnny Depp filling the role to great effect. So when casting for Mr. Magorium, the makers needed an actor with a certain gravitas. They settled on Dustin Hoffman.

At the start of the film, then, we meet Molly Mahoney (Natalie Portman) who has never fulfilled her childhood potential and feels trapped in her life. She is the one Magorium wants to take over his store, but she seems unable and unwilling to do so. There are two other major characters in the film. One is Henry Weston, the mutant (actually an accountant) who is brought in by Magorium to get the store's accounts into order, and Eric (Zach Mills) - a local child who spends all his time hanging out in the store.

So, in addition to the main story we have two other sub plots - that of Mahoney building up the courage to fulfil her potential, and Henry learning to accept that there is more to the world than columns of figures and making them add up.

A film like this resolves around strong believable performances from the cast, and in this respect the film doesn't quite deliver. Whilst Hoffman doesn't do anything much particularly wrong in his role, he never quite jumps off the screen in the same way that the two screen incarnations of Wonka do. It is difficult to say quite why this is - but some of it must be to do with the writing. The character is a very pedestrian one, and it needs a touch of an anarchic performance I feel to get the best out of him. This is something that Hoffman fails to nail.

Alongside Hoffman is Portman, looking worryingly skeletal. In this film she is sporting a severe short hairstyle, and really does seem to not be particularly well. Her performance again seems to lack the same spark that Hoffman's does. I am not saying that either actor's performance is particularly bad - it is just that there does not seem to be any kind of chemistry - and neither really manages to bring a true sense of wonder and magic to the fictional world they inhabit. Sadly, the same is true of Bateman who has perhaps the biggest journey of the film to go through. Just as young Eric seems to be bringing him round to the sense of magic, the film seems to abruptly change direction, and his character arc is rather strangely just dropped. His performance is similarly stilted.

Which leaves one person to steal the show - and he does so with a truly magical performance. Somehow emitting a sense of maturity beyond his years, young Zach Mills as Eric underpins the whole film. No mean feat when you consider who he is acting against. He brings a sense of wonder, and a truly natural feel to his role, and amongst such a stellar cast, he is the only one who seems to truly grasp the sense of wonder that the film should engender. This he does, and he almost single handedly rescues the film.

The toy shop itself is brought to life by a mixture of CGI and more traditional effects. There are some nice ideas here, including the draining of colour to represent the store's mood - and some of the effects are very clever - but as an adult I did find this all rather passé. It didn't draw me in as much as Burton's Chocolate Factory film of a few years ago. It is probably fair to say, however, that the target audience of children may find this more enchanting than I did. Sadly, however, this proved not to be the case with my 6 year old niece completely unimpressed with these scenes. Perhaps part of the reason is that the store just seems so crowded. There is no time to really take in what is happening as multiple events just layer on top of each other in some kind of crazy acid inspired CGI fest. This leads more to a sense of confusion rather than wonderment. At least, it did for this viewer.

So, the performances are not up to scratch, and the effects are confused - which leads us to the story and the direction. Apart from Henry's story (which is strangely dropped mid-film), the plot is genuinely well written and does have something to say about growing up, dying, and fulfilling your potential. Sadly, under Zach Helm's direction these messages do have a tendency to be hammered home with the subtlety of a sledgehammer, and are almost lost under rather too many layers of sentimentality.

Reading this review back, I am aware that it does seem rather negative which is a shame. Mr. Magorium is definitely one of those films where, when you analyse it afterwards, many flaws are apparent. However, it does have a genuinely sweet heart - and is at least trying to do something different and unique. Perhaps the biggest problem, however, is that we sat down three generations of the family in front of this film, from my 80 year old mother down to my 4 year old nephew. My Mum fell asleep, my Dad and I got bored, and my niece and nephew kept getting totally confused and ended up in a cushion fight on the sofa having to be separated by my sister. That is not a good success rate.