This one, like so many direct to streaming offerings, is all filler, very little killer. 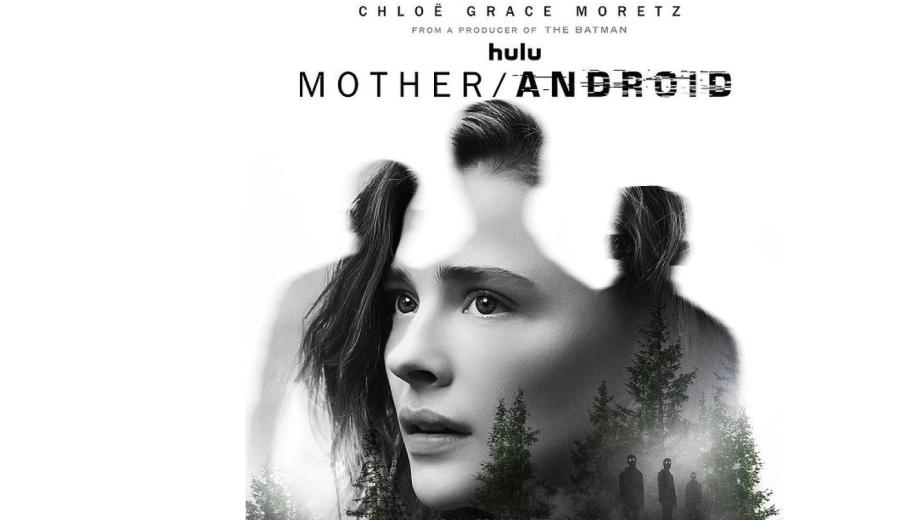 Lumbered with a string of duds, Chloë Grace Moretz is one of those actors that always seems to turn up good in bad things. Not universally true, as she demonstrated some comedy acumen from a young age in Kick Ass and, more recently, a little heavier lifting in the masterful Luca Guadagnino reimagining of Suspiria. But for every hit, there are simply too many misses. Her ratio is all off. Her latest, Mother/Android only cements her title as “the best thing about a dull movie.”

Shortly before heading out to a Christmas party, college student, Georgia discovers she’s pregnant. As her and her boyfriend Sam leave the house, their distinctly human-looking android wishes them a happy Halloween. This is only the first sign that things are amiss, and when a technological malfunction goes national, Georgia and Sam are left fighting for survival living in the woods in fear of the new android army stalking the US.

Beyond the almost non-sequitur title (yes there is a mother, yes there are androids but, thematically, neither are of much consequence until the final 15 minutes) there isn’t much to ponder about Mattson Tomlin’s debut feature. The plot plays out like a combination of 28 Days Later and A Quiet Place, though taking only surface details from either and treating those details as disposably as the majority of the half-introduced and half-baked “original” concepts.

... chief among the missteps of Mother/Android is its pacing.

As Sam and Georgia make their way toward a rumoured safe haven they stumble across every plot beat you might remember from other, more competent movies, each unfolding with equal predictability. The execution of these is never less than competent but the word that permeates every thought about the film is “stale.” Retreading old lines is no crime, of course, but here Tomlin’s direction feels very mechanical through its character moments, and erratic and confusing through its action.

Unsurprisingly perhaps, chief among the missteps of Mother/Android is its pacing. The reliance on padding to engineer tension is, at times, a little embarrassing as we sit and watch Sam cut through nearly identical brush with a machete, make almost identical swerves on a dirt bike through the woods, watch as nearly identical scenes play out as both Georgia’s fantasy and the stark reality; the movie is like a plushie of a terminator.

It feels clumsily structured too, as it dips from plot point to plot point, resolving each one as if it were the end of a twenty minute TV episode. The through lines are faint at best.

The powerhouse performance from Chloë Grace Moretz as Georgia is really the only thing preventing this from sinking into the realms of yet more Netflix fodder. Her ability to take some fairly perfunctory material and deliver a heart-wrenching performance is testament to the acting skill she so rarely gets to demonstrate. Because of this, the deep emotional pulls required in the later stages of the movie are its best card, yet they still serve to highlight what a miss the movie is. Algee Smith as Sam creates almost negative screen presence through his barely resonant performance.

What’s missing from the rest of the movie is any consequence...

The film does come around to touching on some weighty material in its final act, once it’s past all its robo-panic, material too close to the bone to not be drawn from life. It’s too little too late, sadly, but it demonstrates that Tomlin does, in fact, have an eye for human tragedy and emotional dialogue when the need arises. What’s missing from the rest of the movie is any consequence relating to… well… motherhood or androids. All possible avenues for the exploration of slavery, humanity, rebellion are shunned in favour of a “zombies but smarter” narrative. Georgia’s pregnancy is nothing more than a mild inconvenience which makes her grunt and groan every few steps. It seems to matter not an ounce when it comes to being a week overdue and, say, riding a dirt bike, or running around the woods.

These are perhaps not beyond the realm of suspension of disbelief for some. But they’re indicative of the fact that, aside from its admittedly powerful final moments, it’s all just a bit thin to make anything out of.