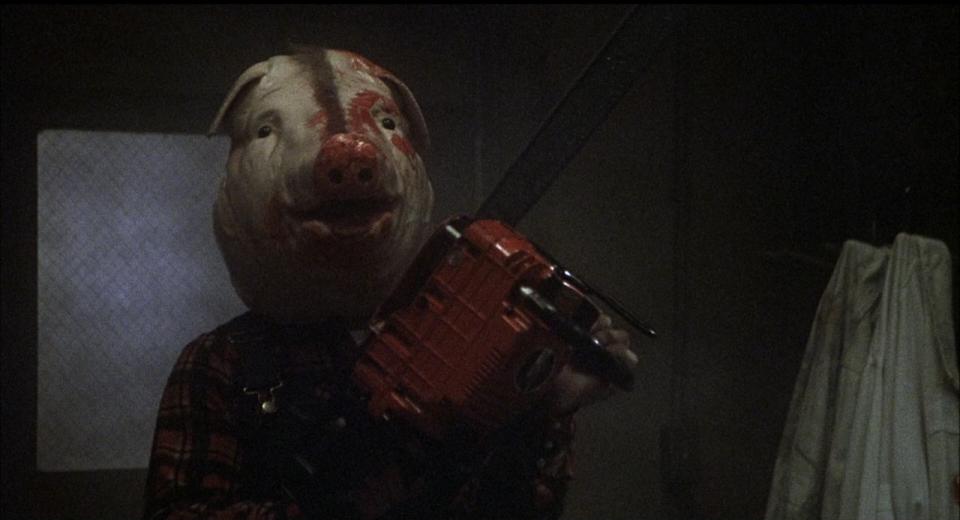 And I must say that the image is very good, indeed. And very grainy!

You will never in a million years mistake the picture seen here as being a hi-def transfer from a modern film, but that does not mean for one second that you won’t be impressed with it, given some consideration for the age and low-budget aesthetic of the film. Connor’s film is a cult gem, but you wouldn’t really have expected it look as bright and cheerful and lively as this. Grain is all present and correct, and it looks faithful and film-like. There is a consistency of texture that should please most fans of bygone exploitation – it’s certainly not as rough ‘n’ ready as many low budgeters from the period, but it has not been irresponsibly scrubbed-up to look like something that it’s not, either. Skin-tones are healthy and manage to stay clear of any country-boy ruddiness that has been overegged. If anything you would have to tone down Rory Calhoun’s leathered visage. The comic-book zeal with which much of Connor’s film was produced is abundantly apparent with a transfer that retains the vibrancy of the palette without overly embellishing it. High-lights are natural, and frequently sparked from the sun, itself. Shadows are mostly very good, although this is a film that genuinely intends to keep its darker elements suffused with a weird, 2-panel lighting scheme that thwarts blacks from ever getting too solid. The “secret garden”, for instance, is rich and interesting – foliage, trees, soil, twitching sackcloth – but it is also brightly lit by the characters, and in-context, which tends to make such scenes appear quite artificial and almost stage-set. The weird light and sound show that the Smiths use to entrance their “livestock” is suitably bold, and even if the flashing primaries look a little dry, the scene is splendidly evocative.

Blood, when we see it in the slops-bin of, ahem, off-cuts, and then during the chainsaw slicing, is appropriately thick and gooey. Colours elsewhere are happily cajoled by a bright and sunny disposition. Motel Hell, even during its darker scenes, is not a shadowy affair. If anyone has the old MGM DVD copy, this transfer will more than blow it away!

Occasional speckles and pops hit the screen, but this is a cleaned-up print that really boasts a lot of finer details that have been completely lost on home video until now. There is a lot of facial hair on display with the captured rock-band and the Gospel-spouting Wolfman Jack, and this is treated to some nice separation. Eyes and craggy skin also get a good look-in. The improvements over the SD image are huge. This said, age and damage make sporadic appearances. Some outdoor shots of the lake, particularly, during the glorious sunlight, go all hazy and soft and feature some flickering columns of discolouration when seen from a distance. This is par for the course for this vintage stock, though. Plus, the scenes set in the slaughterhouse also come over all soft and murky, and there are a few more of these, and they play a much more important part in the proceedings. This is partially down to the smoke and grease in the air and, as such, is quite intentional … but the softer, grubbier image is also a result of the source photography, regardless. The video does noticeably alter when we go into these sequences, but it shouldn’t pose any problems.

DNR ain’t happening – although Vincent’s yellow tractor does massively spangly and stands right out from the rest of the image. Nor is any banding. And edges are free from being sharpened. Cooper has a couple of odd freeze-frames going on. One, involving the swingers, is quite overt and lasts perhaps a millisecond longer than is normal. But these are all part of the show, folks, and not errors.

Considering how poor I’ve seen this film looking over the years, and how positively chirpy it appears here, I’m awarding Arrow’s transfer of Motel Hell 8 out of 10. Like its main star, it is old and worn, but still possessed of an undeniable inner spark of vitality. Arrow’s disc checks us into Motel Hell to the tune of an LPCM 2.0 track. It is hardly going to wow anybody, but this is a serviceable enough mix that doesn’t groan under the weight of too much expectation.

It’s fair to say that there isn’t much in the way of dynamics. Even with a chainsaw duel, this isn’t the type of track that has been designed to have you shuddering with impacts and recoiling from decibel-shredding screams. Yet, there is a surprising amount of depth that has been afforded, meaning that the ambience of the eerily idyllic setting provides some atmospheric detail. Bird calls, honking car horns, squealing tyres, throaty shotgun blasts, the sudden bursting of a floating inner-tube, and the menacing moans and gurgles of an approaching horde of vengeful “cattle” are all things that bring the sound design to life. You won’t be amazed by anything on offer here, but given the vintage of the source and the lowly aspirations of its makers (which actually include Star Trek sound mixer Dan Wallin!), this presentation actually sounds quite healthy.

Dialogue is fine enough. There isn’t much clout to any of it, and it can all sound a tad tinny and off-to-market, but there’s never a moment when it isn’t perfectly intelligible. The score from Lance Rubin is actually very effective, with some moody suspense and a few stingers, as well as a fine warbly surrealism for the faux karmic farming practices and happy times at the ranch. Rubin also scored J. Lee Thompson’s Happy Birthday To Me before being swallowed-up by TV.

I will say that there is some occasional background noise, but this will fail to register with anyone who isn’t actually listening out for such things.

Overall, this is a fine old audio transfer of a very limited source track. I’m giving it a 6 out of 10. Arrow does Connor’s film great service with a superb roster of supplements to add to the lurid fun of Motel Hell.

First up is a very good commentary with Connor, himself, and Calum Waddell that is warm, amusing, insightful and very engaging. The pair discuss the film and the era in which it was made. Connor tells us how he got the gig, and about the casting and the location work. We hear about the special FX and the difficulties of shooting the chainsaw duel. Nina Axelrod’s boobs get a couple of mentions, but what I liked about this chat was the thoughts that both speakers had for preserving such films not just in hi-def masters, but in a physical realm as well. Both recall the arcane beauty of VHS and rue the inevitable demise of physical media … not least because of how such an evolution will impact upon the acquisition and need for special features, such as commentaries, being available in the one package.

Paul Linde is interviewed in his own little featurette, Another Head on the Chopping Block, and he is pleasantly off-the-rails. Very fond of his experiences making the film, he brings plenty of anarchic anecdotes and trivia to the table and enjoys telling us of the turns that his career path has taken since those days.

Playboy Playmate turned actress Roseanne Katon crops up in her own little segment, From Glamour to Gore, to recall her days down on Vincent’s Farm. She plays one half of a whiny, doomed couple of hot ladies that wind-up being prepared for dinner.

Big Motel Hell fanboy and filmmaker Dave Parker (The Hills Run Red) sits and bigs up the movie that made such an impact upon him in Back to the Bad Woods. Cradling an awesome pig’s head mask replica in his lap the whole time, he digs beneath the weirdness of Cooper’s home-grown curio and pinpoints the connections between it and Texas Chainsaw and how Motel Hell then had a far-reaching influence of its own upon on the genre.

A featurette entitled Ida, Be Thy Name takes a look at the role of females in horror films, primarily at them taking on the villainous parts for themselves. Some interesting speakers contribute, from Scream Queens to critics – all ladies, I should add – and the whole thing whistles along with a slew of illustrative clips from a variety of movies, and proves that the female is certainly capable of being far deadlier than the male. I like women who like horror films, and there are a couple here - raven-haired temptress Elissa Dowling and the gold-and-azure-haired Stacie Layne Wilson – that I would love to take a bloodbath with, if you know what I mean.

The film’s Theatrical Trailer is also included, and the full retail release (mine is just the PR copy) also boasts a collector’s booklet with an essay on the film from the redoubtable Kim Newman, and the packaging, of course, has a reversible sleeve with a choice of artwork.

With all this stuff, Arrow have really added to the entertainment factor of Motel Hell and it is a credit to their boundless dedication that they could root out some of the participents to wax lyrical about their time down on the farm. Very enjoyable indeed. Quirky, weird, wacky, subversive, and extremely amusing, it plays it all perfectly straight, yet constantly teases the funny-bone with its macabre sense of humour. The cast are a hoot, but Rory Calhoun and Nancy Parsons are just an awesome double-act of doting delinquents that keep the pig-sty sly, the meat a-smokin’ and the home-fires burning.

I didn’t really expect great things from the transfer or the extras, but was pleasantly surprised in both departments. Arrow digs out who they can from the production and allow them to air their memories and opinions for us. That, in itself, is commendable when it comes to an ultra low-budget, under-the-radar oddity such as this. But the transfer is terrific, given the vintage and the lowly aspects of the shoot.

Personally, I can only throw my weight behind this release. I know the film doesn’t deliver the gore that people then, as well as now, demand, but you have to come into it with your mindset flicked to the setting marked “SERIOUSLY ASKEW”. A working understanding of the flamboyant EC style of Amicus definitely comes in handy, but Cooper is able to work so much more into this crazy set-up than just comic-book moral comeuppance, and knee-jerk shocks. This is quite a brave movie to come out during what was a pure zeitgeist for the genre, a period in which every successive offering sought to outdo the previous one in terms of taboo-breakage and evisceration, without wallowing in the red stuff, itself.

Some people will scratch their heads at the score. So what? Motel Hell is a rare delight that does its own thing under the shadow of much more infamous clansmen, and more than brings home the bacon.