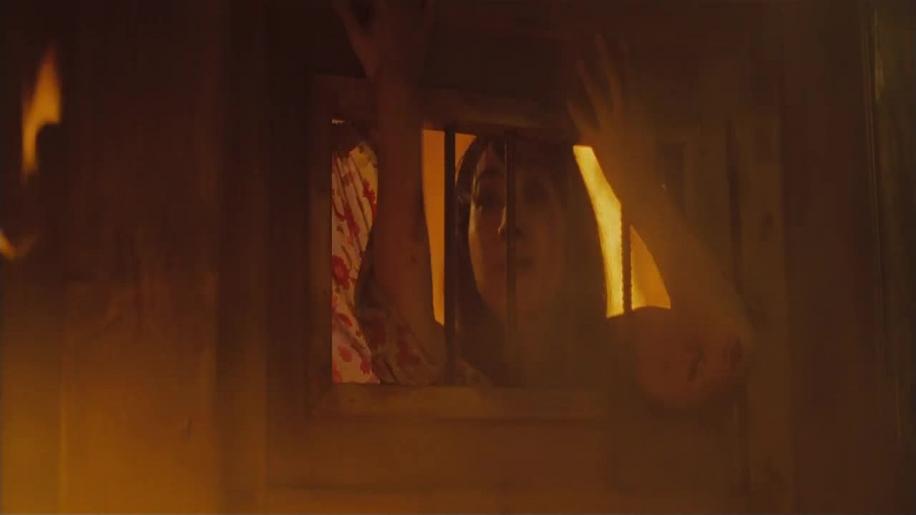 The emergence of South Korean cinema as a leading light of polished and inventive cinema just keeps on rolling, with slick thrillers piling up one after another. The latest in this long line is Moss (Iggi in its native tongue), a dark and brooding mystery based on an internet comic that tells the tale of an estranged son unravelling the secrets of where, how and perhaps why his father came to die. Set amid a seemingly idyllic local community, director Kang Woo-suk (the Public Enemy trilogy) begins by using a flashback, introducing core characters and their involvement at the Sam-deok Prayer House. We meet Director Park, a figure embittered by the arrival of Ryu Mok-hyeong (Heo Jun-ho – Last Present), as he sees this new interloper start to capture the hearts and minds of those who previously would have looked to the organisation he runs for spiritual guidance. It soon comes to light that the Director is merely taking chagrin at the manner in which this new guest has been able to acquire gifts of money and land that he himself would have liked to acquire.

Kang tarries long enough in this flashback to establish it as the basis for much of the ensuing drama and also to ready viewers for any further, perhaps lengthy, trips into the past. It also introduces us to the character of Detective Chun Yong-duk (Jeong Jae-yeong – Public Enemy Returns) as he was in his prime, a brutal and scheming individual and one-time co-conspirator with Director Park. This overlong opening section of the film strives to twine together the two strands that will creep through the entirety of the story regarding Detective Chun, namely that he is at once capable of cold, calculated violence and yet at the same time is able to back up such emotions with contemplation and thoughtful reasoning. It is this combination that brings Ryu and Chun together, with the latter having been unable to break the resolve of the enigmatic thinker by imprisonment and acts of violence. The blood starts flowing early, but once past this opening salvo by Kang there is little but hinted malevolence for the majority of the two hours and forty minutes.

Once the alliance between these disparate men is cemented, thanks to an act of retribution Chun carries out on behalf of Ryu, gaining revenge for Young-ji - a raped girl that follows the erstwhile spiritual teacher, the two men set about a shared goal of helping those who’ve sinned. Skip forward to the present and Ryu has passed, seemingly peacefully, in his home in the enclave that the pair have built. It is a microcosm, a world in which ex-prisoners and those lost can live peacefully under the watchful gaze of a spiritual leader such as Ryu and the now town Chief Chun.

Up to this point everything plays out like a thoughtful and pondering piece about the nature of being. Escaping sin, pacifism, corruption and justice are all briefly touched upon. Once into the present day the narrative proper begins, with the Ryu’s estranged son, Ryu Hae-guk (Park Hae-il – Memories of Murder), entering the village to see how and where his father died. As he starts to distrust the townsfolk and wishes to discover just why they are all so eager for him to head back to the city, he is aided in his quest by Park Min-uk, a prosecutor with whom he has had several run-ins. This give-and-take relationship is arguably the most interesting pairing as many of the other areas of character dynamics are dominated by questions that remain unanswered. Stringing out the tension is a grand idea for a thriller, but after a couple of hours the constant dodging of key issues can start to grate. Kang does his best to eke out the drama as well as actually adding in some much needed exegesis but the explanations for why, say, ex-convicts come to follow detective Chun or just what it was about Ryu senior that could freeze a hardened heart isn’t fleshed out enough for the outcomes that result from such things to be believable.

Thankfully Ryu junior is soon seeing, hearing and discovering things that divert attention away from the lack of depth inherent in such areas and manages to shift the focus to far more tangible issues such as secret documents and hidden doorways. In doing so the emphasis is on the here-and-now and the uneasy demeanour of the village inhabitants. The prime example in cinematic terms of this type of unseen threat, hidden behind smiles and well wishes is The Wicker Man, but unfortunately Moss not only fails to deliver the required unsettling tone, something that is usually established through over-helpfulness and riddles imparted by the locals creating a balance of uneasiness, but also moves towards actual violence when situations reach boiling point all too quickly. A sudden shift from disquiet to brutality can be a very effective tool in a director’s armoury, but when coupled with a character such as Ryu Jr who is all too eager to snoop, poke and pry in a less than well thought out style, the result is more likely to have the viewer’s fists clenching the chair arms with consternation at the telegraphed perils, rather than because of well-crafted apprehension of imminent danger.

The area that does stand up to similar tales of undiscovered secrets in small communities is that of the town elder – Detective (now retired) Chun. As a young man he is intimidating, fierce and vital, yet as an old man he remains no less imposing a figure. The three ex-convicts he has surrounded himself with as loyal henchmen, no matter how violent their tempers are, yield to his word. The sad fact is that he, as a character, manages to overshadow what is unearthed, as by the time viewers have sat through two and a half hours of Moss they have probably already ruminated on many possibilities, all of which are likely to be far less mundane than that which is finally put forward. There is no great Oldboy moment that will leave jaws on the floor, no shocking twist that greatly changes what has been seen previously.

What should have been a marriage of spiritual characterisation and standard thriller mechanics ultimately ends up as little more than the latter with smatterings of musings on the subject of the former. It still works as a good mystery but once the credits have rolled many will maybe judge it based on the quality of the revelations and their ability to pull the rug from under their feet – they don’t. Apart from one twist, the majority of the motives, desires and catalysts for cover-ups are fairly simple. Moss is still effective as a genre piece, but the early infusion of karma, culpability, sin and redemption, and high-minded complex characterisations, hinted at an air of subtlety that failed to materialise. Hidden tunnels, murders, corruption and good old fashioned sneaking around where you’re not supposed to be, all surround Ryu Jr’s game of cat-and-mouse, with the villagers unwilling to impart their secrets – it’s good fun, but it promised so much more.