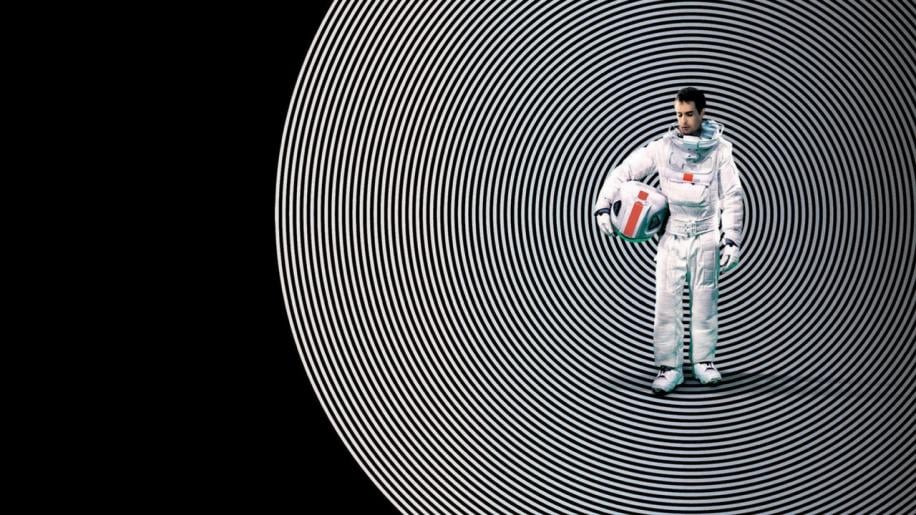 £2.5m is not a lot of money to make a sci-fi movie. In fact it's a positively miniscule budget in a genre where expensive CGI can take considerable precedent.

The likelihood of any rookie director being able to make a decent sci-fi on a shoestring budget is therefore pretty unlikely. Moon however is a film that has somehow taken on the big boys yet delivered in a unique and very different way.

Duncan Jones better known as the son of David Bowie ditched the family stage name as well as the tag 'Zowie'. Good call I'd say. 'Zowie Bowie' does after all have a rather embarrassing ring to it if you ask me!

Perhaps the guy just wanted to prove a little as someone in his own right rather than under the shadow of his father?

No doubt though, the sounds of 'Starman' playing in the Bowie household during his formative years probably left its mark.

There's a Starman waiting in the sky

but he thinks he'd blow our mind

There's a Starman waiting in the sky

cause he knows it's all worthwhile

Let the children lose it

Let the children use it

Let all the children boogie!

Perhaps Moon is actually a subconscious effort of sorts in order to materialise the lyrics of his father's song?

Anyway I digress before I've even started so let's get to the matter in hand. It's clear with such a limiting budget there was always going to be compromises in making Moon. I'm not going to beat about the bush as what we have here are Space 1999 special effects given the 21st Century treatment. Yes folks, its low budget sci-fi.

Moon is not a film that is out to wow you with a CGI fest so please set your expectations accordingly. I wouldn't wish to knock it too much though because this film really makes a fist of it elsewhere.

Bill Pearson takes on the task of miniaturising the lunar landscape and trying to make the space modules appear as realistic as possible. Clever use of lighting and flaring helps but cannot hide the fact that they are in fact models. The brake lights on the space buggies are kind of cute and the gravitational pull on the lunar debris is a little more than off, but hey all is forgiven. The end result itself is nonetheless surprisingly good.

There's also no escaping that this movie borrows heavily from some of the all time classics. Of course it's all been done before but that's no bad thing. The fact it does so unashamedly affords it familiar territory. Stanley Kubrick's 2001: A Space Odyssey though is never in danger of being usurped by Moon. If anything Silent Running and Solaris are nearer to where this story is at.

Sam Bell (Sam Rockwell) works for Lunar Industries and has been posted on the far side of the moon to harvest Helium 3. The introduction informs us that H-3 fuels as much as 70% of the Earth's energy requirement. Apparently the suns rays become entrapped within the loose lunar surface creating a form of latent energy. A simple form of harvesting from the rocks then releases this invaluable resource for use on Earth.

What we have here is in effect a giant lunar energy farm. It's manned by one guy who tends to the operation of the strange looking combine harvesters (?) and then sends the precious resource back to Earth. At this point in the film the first question in my mind was why was there only one guy to man such an important operation? The mind was baffled?

As the story unfolds it turns out Sam Bell has been hired on a three year contract. Thankfully for him his lonely stint is soon coming to an end. To say he's looking forward to going home and seeing his wife and daughter is an understatement. Three years on a solitary outpost such as this is more than enough for anyone to take. It's clear he's about to lose his sanity.

Sam, however is not alone and is kept company by a computer called GERTY.
Kevin Spacey provides the voiceover and his robotic voice draws immediate parallel to the notorious Hal 9000. GERTY tends to Sam's every need and there's pretty much nothing that he's not able to do. This is great but it's not the human companionship that Sam yearns for.

There appears to be something less sinister about GERTY than there ever was about HAL. He tends to express more emotion and via a small display on his front facing panel he can display all sorts of emoticons. Nevertheless, the fact that you don't know what is about to happen leaves a lingering doubt about GERTY throughout the film. It's one of the areas of the film that help it to work so well.

The script was written by Duncan Jones and Nathan Parker and the storyline never runs too deep or beyond anyone's comprehension. It's the sense of isolation, claustrophobia and the clever build of intrigue and suspense it creates for the 97 minute duration of the film that enables it to hit the mark. This really is the films coup de grace.

Jones has also understood that the accompaniment of a decent score helps a psychological thriller no end. Whilst the budget was tight it was a wise investment in making sure that this element was up to scratch. Clint Mansell has provided a beautiful and haunting score which adds an eerie verve to the whole experience. It'll never be remembered as the 'Blue Danube' but it does grab you pretty much from the start.

Of course there are holes in the storyline but the minimalist screen play and backdrops are astutely created nonetheless. The confines of the space station induce claustrophobia and the ventures outside become repetitive but the script cleverly injects intrigue at key points during its brief timeline. There is always a centric point of interest moving from one moment to the next.

Sam for example begins to find himself becoming increasingly insecure. As he approaches the end of his tenure, peculiar and rather strange things begin to happen; none more so than when he suddenly crashes his lunar craft after seeing some strange hallucinations.

Suddenly, he then finds himself awakening back in the space station not quite knowing what has happened and how he's got back there? GERTY's explanation doesn't sit comfortably with him and a rescue mission is soon sent from Earth to help fix the machinery and rectify all the problems. It's all a little too late really because Sam Bell's suspicions have been deeply aroused as he tries to go about piecing the jigsaw for himself.

The story is actually straightforward enough for most to be able to work out what is going on from hereon in. There is though a short spell of 'Jekyll and Hyde' within it which may be a bit confusing for some at first. Whilst it all comes together in the end I felt that this episode of the film began to drag on for a little too long.

In order to help re-invigorate the suspense a countdown clock is introduced. It's certainly a very clever inclusion because it comes at precisely the point where the story begins to flag a little. This helps renew the anticipation no end as to where the conclusion is headed.

Sci-fi fans will love this movie and there really is nothing lacking to exclude anyone else who fancies a psychological thriller either. OK, so what if it hasn't got all the bells and whistles? It does after all have everything else in pretty good measure.

Moon as a movie has its quirks which maybe irksome to some but as a project it is still a remarkable achievement.