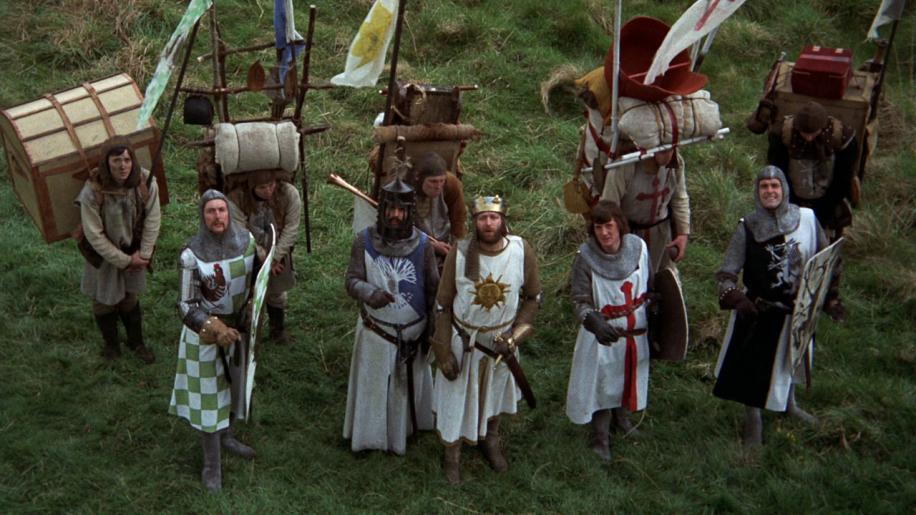 So it's not had a complete restoration, but even with the scratches and dirt evident on the source material, the anamorphic 1.85:1 still impresses. The colours are a little faded with age and the picture does look a little soft at times. But, compare it to any previously released edition and its like watching a completely different movie.

Apart from additional clarity, there isn't too much to get excited about when it comes to the film's newly created Dolby Digital 5.1 audio track. As is always the case with older mono sources remixed for surround there is some dialogue and Foley movement across the front speakers, but it never really opens the film up to any significant degree. The music mix benefits from the added bass and range, but in purely technical terms there's nothing here to get you over excited.

Living up the claim on the sleeve that this is 'The ultimate definitive final special edition DVD', Columbia TriStar's two disc Monty Python and the Holy Grail incudes a veritable treasure trove of supplementary material. The first thing worth mentioning are the animated menus. Done in typical Gilliam style, they feature some pretty impressive Dolby Digital 5.1 sound (choose The Hard of Hearing on the main menu for plenty of great examples). The first disc features two audio commentaries, the first is provided by John Cleese, Eric Idle and Michael Palin, and the second offers input from directors Gilliam and Jones. Other extras include: a Matrix style Killer Rabbit feature that provides storyboards; art and budget info and a set of subtitles for 'People Who Don't Like the Film' which uses dialogue taken from William Shakespeare's Henry IV, Part II and stitches it together to fit the plot of the film as closely as possible.
Over on Disc Two you'll find: three sing alongs; a 45 minute documentary Quest for the Holy Grail Locations with Michael Palin and Terry Jones; a How to Use Your Coconuts mock educational film; two scenes from the Japanese version of the film which demonstrate the problem involved in translating the film; a gallery of promotional items and cuttings (including a narrated review from Monthly Film Bulletin); a 1974 location report; galleries of international posters; location photography and storyboards/concept art; two trailers; biographies, the Knights of the Round Table song performed with Lego, mock location recce footage with a great commentary and a weblink.If you don't 'get' Python then this DVD won't change your mind, but for those with a sense of humour it's an essential buy.