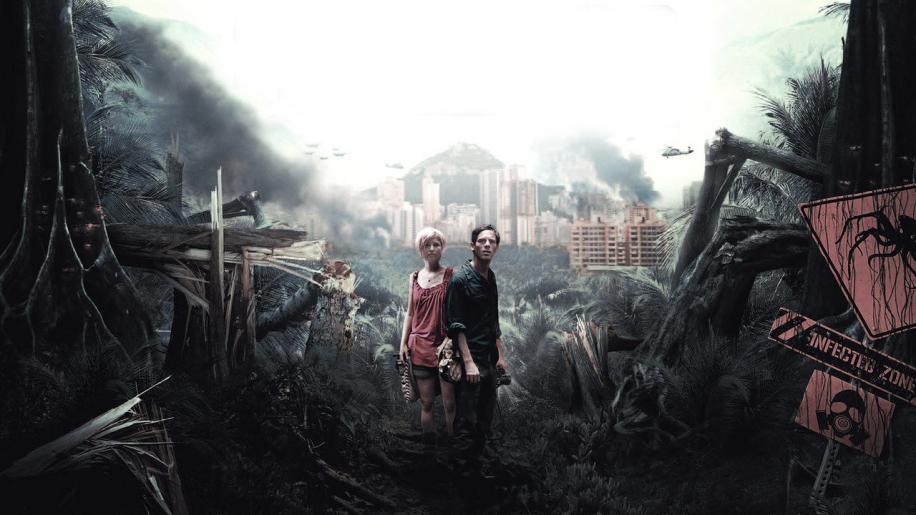 Everybody knows that Avatar cost about a half a billion to make and promote but, as pretty as it is, looks aren’t everything, and every now and then a movie comes along and proves just how much you can do with a whole lot less. Last year David Bowie’s son, Duncan Jones, spent less than a hundredth of Avatar’s budget making Moon, a fantastic little, Brit-made, psychological sci-fi thriller, starring Sam Rockwell. If you haven’t seen it, you should – right now – it was one of the best movies of 2009. This year we have something even more daring, a guerrilla-shot, almost entirely improvised-on-location-with-real-locals movie that costs something like $500,000 to make. Again, a British production, it took a real-life couple and transported them to Mexico, where they would interact with the locals, watch the military rumble down the streets in their tanks, and take a fairly eventful trip down river. It’s called Monsters.

Man has discovered alien life on another planet, but after a space probe transporting samples crash-lands on re-entry, all hell breaks loose. A few years down the line and the US border is protected by a huge wall, to keep out the creatures which come out at night and devastate the surroundings. There is a vast quarantine zone, where everything has been deemed infected, and where the creatures now reside. And it sits between North America and Mexico.

Andrew (Scoot McNairy) is a US war reporter, an ambitious photojournalist who has been dispatched to Mexico by his newspaper’s owner to find and escort his daughter, Samantha (Whitney Able), back to the States. What starts out as a simple task becomes yet more complicated as a series of unexpected turns lead the unlikely pair to take the long way home – getting to know each other along with way, meeting with dubious locals during their voyage, and ever-wary of the night-borne threat of the mysterious creatures that rumble in the jungle.

Monsters is a great little movie with a terrible title. Really, who were they trying to appeal to? Kids will be disappointed at the level of effects and action, and gore-hungry adults will be shocked at the complete lack thereof. If there was one thing that initially put me off the movie, it was the name. Thankfully I didn’t stop reading there.

What I found out is that actually Monsters is a very clever road movie, showing the natural evolution of a friendship/relationship between two people who have been put in quite a dangerous situation – played out against a futuristic District 9-esque backdrop – with a hint of corresponding socio-political commentary running beneath the surface. After its surprise opening, the scene is set: the US is under attack, locking up its borders to protect themselves from invasion from these extraterrestrial creatures, and getting to the border – getting across the ‘infected zone’ – can be quite dangerous. We are introduced to these two people and immediately sense a little chemistry. Yes, you can see the big engagement ring on her finger, but you know that – were it not for that ring – something may have happened between these two. They immediately establish themselves as a likeable pair to follow on this journey, and you have absolutely no idea what to expect once they get going: and neither do they.

It’s an involving voyage, peppered with strange shifting masses in the water, creepy noises in the jungle, seemingly tall tales told by armed rebels around a campfire, and the persistent warning never to go out at night. And all the while you discover more about these two people, their history, what got them in this mess in the first place, and what’s waiting for them when they get back ‘home’. But it’s what’s waiting for them along the way that has you gripped to your seats.

And it’s interesting to know that the filmmakers probably didn’t even know what was waiting for them when they put this baby together. It was literally all just two relatively unknown actors – a now-husband-and-wife couple – along with a crew of about half a dozen people, travelling around Mexico and shooting improvised conversations with the locals, passing military vehicles and shady, armed rebels. The end result has been edited down into a fairly taut 94 minute movie which is more of a mystery romance than an out-and-out sci-fi horror; more road movie than thriller, despite having elements of all of the above within it.

The effects were apparently done by one guy – the man behind the whole thing, Gareth Edwards – working in his bedroom for months. And, for the most part, it paid off. He keeps his tension high by keeping much of the creepiness off-screen, painting his creatures largely in shadow, or in the coiling of tentacles over some inanimate object. When you do get to see them, his adopted bioluminescent Kraken-like design is extremely effective – arguably more so than Spielberg’s War of the Worlds invaders – somehow both otherworldly and strangely familiar, and never less than imposing by their very stature. The whole thing is helped no end by a moody, ethereal electronica score, by composer Jon Hopkins, who appears to be channelling Clint Mansell’s haunting Solaris score, to good effect, beautifully infusing the proceedings with that extra level of unease and mystery.

Keeping the narrative focussed on the characters, and on the little events that befall them – a stalled engine causing them trouble as they are stranded out at night; the covering-up of a lamp to prevent their getting seen by the creatures – Edwards works wonders with the little he has, and still delivers the goods. At the heart of it you get to know and care about this pair, worry for them as they trust their passage to some dubious locals, and fear for their treacherous journey through the jungle, all the while wondering whether they will ever confront the growing bond between them, and the impact it has – if admitted – on the lives waiting for them back in the States. Edwards captures the facial nods between these two (who are surprisingly good at portraying two strangers who gradually develop some chemistry with each other) almost as well as he captures the beautiful landscape: one stunning sunset reflected on the rippling water by the boat standing out as one of the most beautiful celluloid shots I have seen for quite some time. Terrence Malick would be proud.

When this movie is good, it’s really good. And even if the anti-anti-immigration commentary was an unintentional subtext that came purely from filming in that location, the allegory to the US fight against ‘terror’ is unquestionable. But it’s not an Avatar in-your-face kind of statement, but more an observation on tolerance, misuse of force (and ineffectiveness thereof) and a distinct lack of communication. The walls can’t keep nature out.

But it isn’t all positive news. For all the editing done, Edwards hasn’t produced a lean, streamlined vehicle, but more like an interesting, at times beautiful voyage that actually does feel quite long. Some bits are too drawn out, some moments hang for too long, and you get the impression – occasionally – that the movie is trying a little too hard to be more than it is. There’s also a prevalence of jumpy moments, but with no pay-off – you know, when you’re expecting something to happen, then somebody makes a loud noise (like suddenly starting an engine), and it makes you sit up in your seat. This attention-grabbing technique is implemented once too often, falling into the boy-who-cries-wolf category.

And the effects, whilst amazingly realised for the most part (especially considering the budget) are absolutely awful indoors. We’re talking about scenes reminiscent of Cameron’s The Abyss, and that was made over 20 years ago! Really, he should have stuck to night-time, outdoor sequences, as they were much more effective, and these are the only moments that risk taking you out of the movie.

Still, all in all, it’s a superior effort considering the budget, showcasing truly inspirational, opportunistic and improvisational filmmaking techniques used to make a professional movie that stands up amazingly well on the Big Screen. Seriously, this is a movie that’s actually worth seeing in the cinemas; for such a low budget it’s got a grand scale to it, and you won’t be disappointed (and pay attention to the final scene, and its parallels/tying-up with the ‘prologue,’ to understand the true weight of this young filmmaker’s work).

Don’t expect Aliens, or even District 9; don’t expect Jurassic Park, or even Cloverfield – it delivers hints of all of the above, but still you should just watch it for a romantic trip around real Mexico, only with extra-terrestrial creatures looming in the background. After all, it’s so much more, but the real joy is in finding that out. Don’t be put off by the name either, Monsters is a surprise gem in a mixed-bag year of film releases, a Brit indie-flick made for a shoestring budget, which stands up against all those brainless Blockbusters out there and shows off intelligent, innovative filmmaking at its best. For all those mega-budget films out there, which are totally lacking in originality, it’s amazing what you can do with so little, so long as you have a decent idea. Recommended viewing.

Don’t let the odd name fool you, Monsters is a quality bit of British independent filmmaking, shot on a shoestring budget, on location, with only two actors and a tiny crew interacting with locals, improvised dialogue and home-made effects; it is adventurous, observational filmmaking at its best. Adopting parts of everything from Blair Witch to Cloverfield, Jurassic Park to District 9; it is different from all of them, remaining breathtakingly fresh and original in its very natural portrayal of, essentially, a simple romantic road-movie, that just happens to have the setting of an Alien invasion. With subtle nods to the US Home Security program, and a fantastic wrap-around twist (that you will have to be really paying attention to in order to pick up on), it comes as recommended viewing. Just see what $500,000 can lead to at the Big Screen and be amazed that, for all the big bucks thrown around in Hollywood Blockbusters, there’s no making up for a distinct lack of ideas. And this is a movie all about clever ideas, authentic performances and grounded substance. Check it out while it’s still playing.