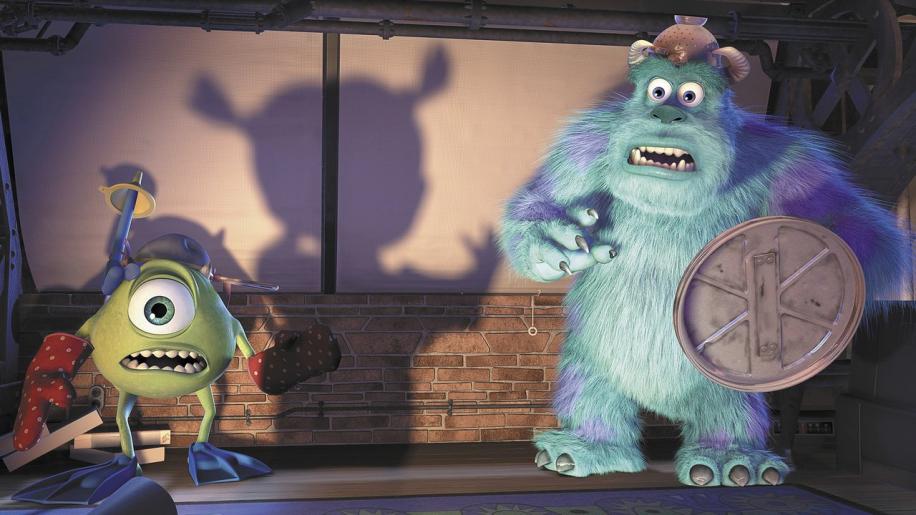 Monsters University was originally due to be released in November 2012, but since the Studio tend to gain even better Box Office results with Summer-released features, they pushed it back to Summer 2013. In the meantime, and following the success of the 3D Lion King theatrical re-release, the now-Disney-owned Pixar pushed its original 2001 hit, Monsters, Inc. back into theatres, also now in a reworked 3D guise. And it's as fun, funny and touching as it was well over a decade ago.

“Kids these days. They just don’t get scared like they used to.”

In a parallel universe, Monstropolis is a bustling city that is inhabited entirely by monsters, and is fuelled by Monsters, Inc., a giant corporation who derive their energy by capturing the screams of young children. Through a series of doors which act as gateways into the human world, highly skilled monsters can venture into kids’ bedrooms and scare the screams out of them, filling up their energy canisters and then leaving back through the portal without ever being discovered.

James P. “Sulley” Sullivan is the best worker in the company, holding the all-time record for most screams. His partner is Mike Wazowski, who handles the portals and the scream extraction, whilst Sulley goes in for the scares. There is but one rule – don’t let the children touch you. Break that rule and an entire decontamination squad will land atop you. However, one night, a portal is left open, and, unable to overcome his curiosity, Sulley can’t help but enter the open door...

Five years in the making, the original concept for Monsters, Inc. spawned from the simple premise of kids being afraid of scary creatures that may be in their closets. The first draft moulded this into an unlikely-buddy-buddy story which followed a huge furry bear of a monster (who would later be named Sulley) reluctantly befriending a young girl who escapes into Monstropolis. Going through numerous rewrites, the story was later embellished to allow Sulley to have a partner-in-crime, a funny alien-looking creature that resembled a giant eyeball. And the rest was history.

Casting saw the ever-reliable John Goodman – great in everything from The Big Lebowski to Argo to even his tiny cameo in the excellent Denzel Washington drama, Flight – take up the role of Sulley, the furry 8-ft monster at the heart of the tale, with veteran comedian Billy Crystal (who always regretted turning down the role of Buzz Lightyear in Toy Story) partnering him as Mike. Perhaps even moreso than Toy Story, Monsters, Inc. relied heavily on the strength of this pairing, and it paid dividends.

With a rival scarer in the shape of chameleon monster Randall Boggs, played perfectly with slimy scheming by Steve Buscemi (Boardwalk Empire) and support from the likes of James Coburn (Payback, Cross of Iron) as the Monsters, Inc. manager and Jennifer Tilly as Mike’s love interest, the players were all in place.

Perhaps what gave Monsters, Inc. the edge, though, was the introduction of the 2-year old girl known as ‘Boo’. Escaping into Monstropolis, she initially terrorizes all the monsters she comes across, but eventually forms a bond with Sulley, and there’s no doubt that this is where the animated feature really manages to gain access to the heartstrings and start plucking away merrily.

Even if it is not as sophisticated in adult-level wit as its predecessor, Toy Story, few adults could resist melting at the endearingly cute, giggly little girl whose journey of discovery would likely be familiar to most anybody who has children of their own. The joy and laughter is contagious; the terror and fear truly gets to you, and you find yourself as protective of her as Sulley ultimately finds himself.

Whilst John Goodman is on top form playing the big bear of a protector, Billy Crystal tries his best to interject some of that adult-aimed wit that Pixar features are so renowned for. Sometimes it hits and sometimes it flies right over your head, and largely Monsters, Inc. does not stand up as the funniest Pixar animation, even if it has the heart and soul elements locked and loaded. Sure, there are some nice touches – like when Crystal’s Mike is trying a clever stand-up routine to garner laughs from a child, but ultimately resigns himself to a giant burp (repeated across the whole piece when he’s trying to make Boo laugh); this reflecting the fact that Pixar themselves often think quite highbrow in terms of humour, but often are forced to accept that kids will probably prefer the more in-your-face, obvious jokes – but there are far fewer pop culture references in the vein of the Toy Story films.

Of course the whole set-up could be viewed as an analogy for the ongoing fuel crisis: Monstropolis is run by screams, no matter what the cost (think: petrol and its side-effects), but there are alternative energies on offer, which everybody is afraid of investigating. Big business is evident in the way that Monsters, Inc. itself is run, and I’m sure there are plenty more great and subtle ideas that the writers have included in this feature – I would expect no less from Pixar.

The animation was, of course, jaw-droppingly stunning. Hell, if it looks this good now, try and think back to how it must have been received on release. This was the first time that any animation studio had truly addressed the issue of realistic fur, and the breakthrough they made in effects animation – rendering 2 million lifelike hairs which all behaved in a different way depending on wind, gravity and movement – had a significant knock-on effect in the way that other items were animated in both this and later productions; expanding from hair to clothing movement and reaction. Just watch any sequence with Sulley’s fur in plain sight and marvel at the level of detail and reactive movement. In terms of pure spectacle there were also plenty of grand set-pieces, particularly towards the end of the movie, and they too set the bar quite high even in terms of Pixar’s output.

Ultimately Monsters, Inc. secured the number 2 spot in most successful animations of all time, behind only The Lion King. Of course, over the years, the Top 50 list has changed, and Monsters, Inc. has too changed position, dropping to the lower end of the Top 20 but its 3D re-release (following the success of The Lion King 3D) may yet give it a shot at returning to the higher echelons. Certainly, these days there are no end of great animated movies being produced – most of which appear to still come from the Pixar camp – but Monsters, Inc. remains one of the strongest entries, and certainly one which fans have become reinvested in since the prequel was announced. For those who are looking forward to seeing the earlier exploits of their favourite monsters, the new 3D rendition of Monsters, Inc. is a great way to rekindle the love.