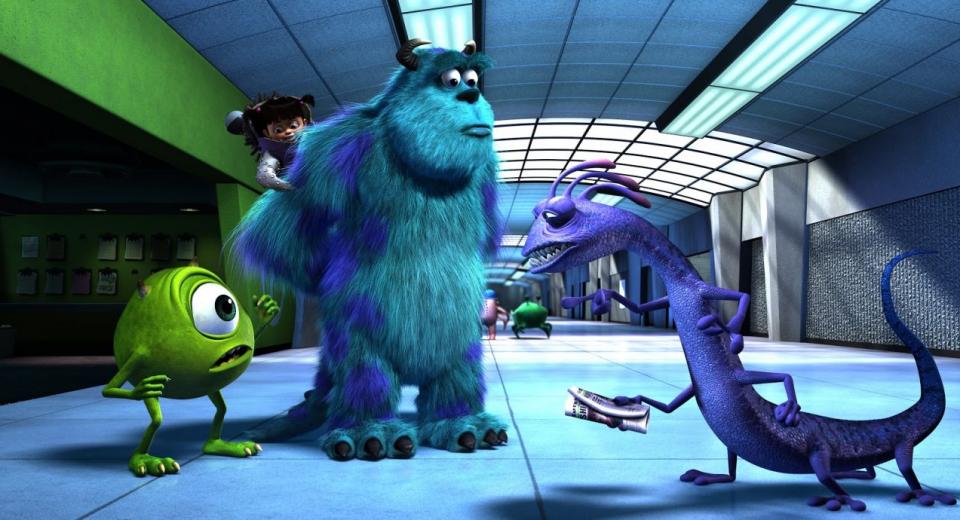 Although not originally designed for 3D presentation, Monsters, Inc. isn’t the first animated feature to impress on the 3D front, and the movie comes packed with some spectacular set-pieces that certainly suit that added dimension. Depth is consistently evident, right from the outset, with day and night sequences boasting an array of long passages, and unfolding backdrops that make the most of the new format. Whether it’s the shot of Sully and Mike sneaking back into the factory, or the Temple-of-Doom-like ride across the various doors towards the end; the broad reaches of the company lobby or the dark recesses of the various bedroom attacks, depth and dimensionality impress throughout.

The characters also display very tangible roundness; avoiding the pitfalls you might expect from a conversion, like cardboard cut-out shapes, the second eye in the 3D was crafted as if this were a natural 3D production (as with the first two Toy Story films), and thus the characters positively come to life – Mike’s spherical, rounded body given dimensionality through skilful shading and shadowing and Sully’s furry coat looking so damn good that you could practically reach out and stroke it.

There’s no noticeable crosstalk; the image proving extremely pleasing to the eye, with even the faster-paced action sequences holding up with very little loss of stability. The newly-encoded presentation handles the material extremely well and delivers consistently throughout.

Equally impressive is the 2D alternative, which basically offers a flawless video presentation that boasts all the detail and depth that you could possibly hope for from a 2D rendition – hell there’s even some 3D pop to boot. Detail is at times unparalleled, observing every little touch to the intricately-designed characters and the just-as-staggeringly detailed sets. From the reflections in eyes to, once again, Sully’s all-too-easy-to-praise fur, this is a stunning presentation. The colour scheme is just the icing on the cake, showcasing no end of bright, vibrant and vivid tones that look absolutely fantastic. Black levels are strong and round out an unquestionably reference quality presentation that certainly deserves top marks. Rather than settle for merely providing the same DTS-HD Master Audio 5.1 track that was available as an accompaniment on the original Blu-ray release from a few years’ back (and is present on the second disc’s 2D-only presentation), we here have a newly-minted remix in Dolby TrueHD 7.1 which actually goes some way towards perfecting the already-impressive original offering.

Dialogue comes across clearly and coherently throughout, largely emanating from across the front and centre channels, and consistently taking precedence over the rest of the track. Effects start off by being nominally quite ambient – crafting a fantastic atmosphere; bringing the factory floor to life in a flurry of moving doors and buzzing workforce personnel – but, as the picture picks up momentum the action draws in more and more full-frontal-assault set-piece noises. The various backdrops all come to life with reliable authenticity, your living room transformed from the hectic streets of Monstropolis to the Arctic tundra in a heartbeat, with all of the channels working to give you a fantastic atmosphere to these various settings. Although it is actually quite hard to discern the precise differences in aural design between the original mix and the new offering, the latter certainly offers up an excellent, immersive soundscape that should draw in and satisfy all movie fans. Boasting a couple of new extras – including the Toy Story Short, Partysaurus Rex and the Outtakes ripped from the end credits of the main feature – this 2 disc package sports more than enough to keep you occupied, spread across both its 3D and 2D discs. There’s also an introduction to the movie by Pete Docter.

Toy Story Toons: Partysaurus Rex is a 7-minute short featuring the hilarious dinosaur from Toy Story. Arguably the best of the three short features in this selection.

For The Birds (also available in 2D) is a 3-minute short which is quite fun, as well as showing off just how great Pixar animation is.

Outtakes and Company Play is a 5-minute collection of the outtakes from the end of the main film.

Audio Commentary with Director Pete Docter, Co-Director Lee Unkrich, Writer Andrew Stanton, and Executive Producer John Lasseter provides a decent accompaniment, charting its conception back in the mid-nineties when Toy Story was being pitched, and the various changes made along the way to production; discussing the script and the subtly informed touches; and adding in some technical value too. Those interested in the movie should give it a listen.

Filmmakers Round Table is a fairly new retrospective 22-minute HD Featurette which has a number of the key crew members reunite at the Hidden City Cafe – itself an inspiration for the movie – and discuss their work together for Pixar, and their fond recollections of the production, with added production stills, concept art and rendered effects to illustrate the journey.

Monsters, Inc. Ride and Go Seek: Building Monstropolis in Japan is a promotional tour of the theme park attraction that was built in Tokyo.

For the Birds allows you to watch the same short film as above, only in 2D.

Mike’s New Car is the only directly Monsters, Inc.-related short, which sees Sulley and Mike reunite for a brief moment. Not quite as good as I’d hoped for, it’s still worth a quick look.

Both discs are rounded off by Preview Trailers. With the much-anticipated Monsters University due to hit theatres this Summer, it seems like the perfect time to revisit the original 2001 hit film that brought together John Goodman’s big furry bear of a monster, Sulley, and Billy Crystals’ neurotic eyeball of a companion, Mike, in the first place. Whilst not the laugh-out-loud funniest of Pixar’s stunning canon of works – nor quite as adult-minded – it certainly has heart and soul; perhaps even more so than the Toy Story features.

This new 3D rendering of Monsters, Inc. is undeniably impressive, and the UK Region Free Blu-ray presents both it and the original 2D counterpart with immaculate video and audio, as well as a slew of welcome extras. Fans should consider this a must-have purchase – unless you’re will to splash out for the arguably over-the-top 5-disc US alternative – and newcomers may want to check out this fun and touching hit prior to the imminent prequel.