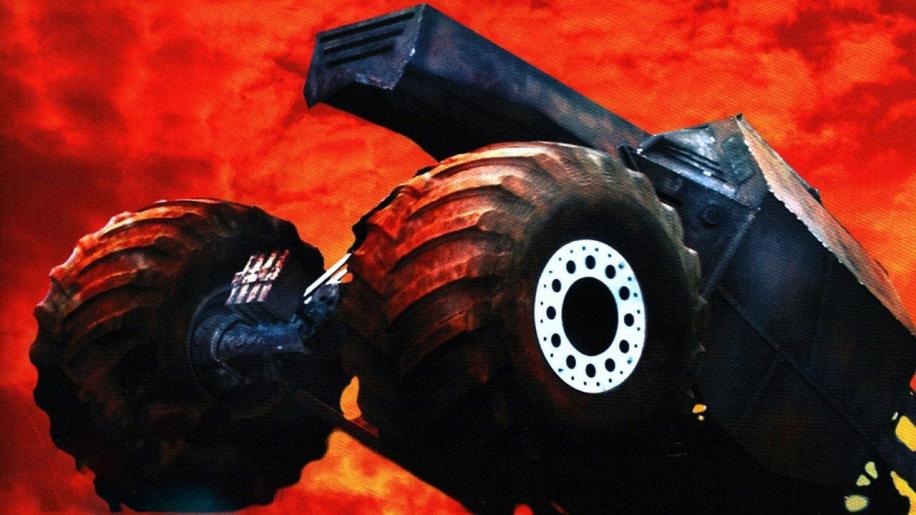 Andy (Jungmann), our geeky hero is in love with his childhood sweetheart - who put out for everyone, except him. Only thing is, she's getting married, so he decides that he should go to the wedding to tell her how he feels. His best friend, Harley (Urich), joins him for the trip but he's one of those friends you really don't want as such. The type that yells “Hillbillies” or “Rednecks” in a place frequented by the people normally associated with those names, in particular Monster Trucks. Soon, ala Duel (well kinda), they are terrorised by a monster truck (hence the title). On his first attack, he shakes them up somewhat and they don't quite click that he's not going to leave them alone. They soon see a rather fetching hitchhiker, Sarah (Brooks), whom they don't pick up, but after one panic-ridden night in a motel, she appears in the back of their car and soon has joined them - being the object of lust as well as a new target for the Monster Man, whom is soon hot on their trail.Well, that sounds very run-of-the-mill and indeed it technically is - if it weren't for the case that it clearly knows it's clichéd and is full of humour. Yes, this is kind of similar to Cabin Fever (in a sense) with a touch of horror and humour, but to me, it's far superior to the aforementioned movie and I'll tell you why. We don't have Dennis yelling “Pancakes” for starters (what on earth was funny about that?) nor do we have a lame explanation for the element of horror (well, ok not quite as lame), but we do have a movie that knows it is fun, knows it's raising a few nods to movies such as Texas Chainsaw, Duel and The Hills Have Eyes. But it does so with its tongue firmly in its cheek and raises a few chuckles along the way. In fact it's got more in common with something like Brain Dead (good horror, very funny too). Ok the 2 leading males aren't the best in the world - not so much Bill & Ted antics, but not too dissimilar either - in fact Harley sort of reminded me (physique wise) of Kevin “Silent Bob” Smith. However, they do come across as normal, even if they aren't particularly great actors. Sarah, played by Aimee Brooks, seems to be coming into her own in the genre, previously seen in “The Hillside Strangler”. While again, not the best actress to ever grace the screen, she is certainly, shall we say charming enough to keep most men's attention.

So we know we're not talking about a cinematic masterpiece (but then when are we when discussing the Horror genre?), so what's it like. Well, it's a little confusing as it's more split than other horror comedy movies, but once you get used to how it works, it works quite well. There are some quite funny moments (such as the roadkill in the hotel) which are laugh out loud funny, if you've got a somewhat twisted sense of humour. The gore is minimal really, but when it happens it is suitably “icky”, such as heads getting squashed into pulp. The storyline isn't great but it does fall into line at the end, making the set-pieces form some kind of semblance of a plot, but I can't help but thing even this is done with a knowing wink. As far as horror goes, it's not particularly scary though - as said it is more a gore-mongers dream than a true horror, but it is good fun compared to, say, Cabin Fever. But is it just me, or does the Monster look like the Cryptkeeper? Besides, where else can you watch a sex scene where the girl impersonates Yoda?