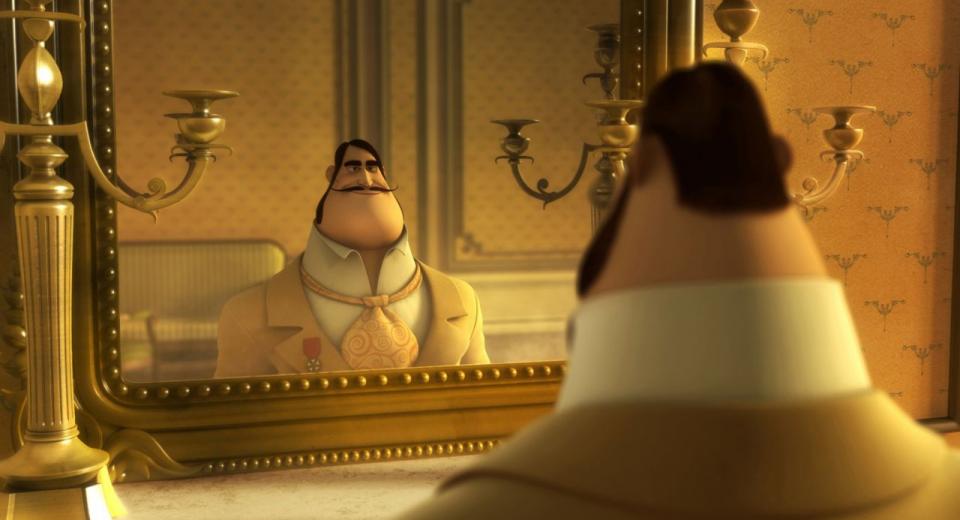 The French are not noted for their international film successes but their domestic output is well regarded and quite a few have become iconic movies in more esoteric viewing circles. A Monster in Paris is attempting to lay claim to just such a niche in children’s animation. Initially released as a French language film in October 2011 it came to these shores as a 3D English release in January 2012, no doubt due to its critical acclaim in the mother country. Interestingly this film has never enjoyed a national release in the USA, a shame as it compares well to similar releases - Ratatouille to name but one and it has been re-voiced predominantly with American voice artists .

This SKU came to me as a 2 disc 3D set. Billed somewhat erroneously on the front as a 3 disc (Blu-ray, Blu-ray 3D + DVD) some may be confused by the 2 disc presentation. Put simply at 87 minutes it is quite possible to squeeze both the 3D and 2D release onto one disc, particularly as the extras are a little limited. The films are separate renders with the 3D version delivered in 1.85:1 and the 2D @ 1.78:1 (16x9 full frame). The difference in aspect ratio is explained by the extra “depth”, allowing you to look around the corners of the screen. The disc is frustratingly slow to boot up with trailers to either sit through or skip before the main menu can be accessed. Do as I did and select the 3D when you only wanted the 2D and it’s quicker to switch the player off and on again than attempt to get back to the selection screen to change format. There is also no resume option. Eject the disc and it’s back to hunting through the scene selection to find your resume point. I find this a real pain with kid’s films as it is more likely they will be called away for homework or meals only to find it will take them anything up to 10 minutes to get back to where they were with the movie.

The film itself is set in Paris in 1910, shortly after the Seine has flooded. Our main characters are Emile, the shy projectionist, his friend Raoul, inventor and part delivery van driver, Lucille a beautiful singer and Police Chief Maynott. Some characters are voiced by the same performer in both the French and English version (Vanessa Paradis as Lucille) while for others the duties have been split. We meet Emile as he struggles with his projector, using all his ingenuity to keep the film rolling. He has feelings for the shy ticket seller but cannot find the courage to ask her for a date. A pity as she is in exactly the same position and is just waiting for him to make the first move. Raoul has no such inhibitions and has 2 woman in is life. His unrequited feelings are directed at his childhood sweet heart Lucille. A gorgeous singer, she is on the lookout for a marriage of power and substance and still sees Raoul as the annoying little schoolboy. Instead our hero showers his love onto Catherine, his delivery truck. He has imbued her with his inventions and much of his own quirky spirit.

As Emile assists Raoul with a delivery they end up in the laboratory of a botanical professor. As he is away his monkey Charles has been left in charge. It would be too much to expect Charles to communicate through speech, so instead there are pre-written notes and plenty of gestures (This is a French film after all). Despite the protests of Charles, Raoul enters the laboratory which in reality is more of a huge green house, similar in scale to the great conservatories of Kew Gardens and starts to play with the various potions the Professor has created. After endowing Charles with the voice of an opera singer and creating a 90’ tall giant sunflower, things start to go a little wrong. The sunflower starts to tip over and knocks yet more bottles to the floor, creating a small explosion and of course the monster. Unaware of his creation, Raoul escapes the chaos with Emile in tow, he not so sure about what he might have seen.

Setting up this first section is relatively quick and the pace is good throughout. Rendered in a similar way to the last Toy Story release there can be no getting away from the cartoon feel. The 3D feels more layered than true 3D, but this is a criticism I would level at virtually all 3D animations with the possible exception of Hugo. To be honest the 3D adds very little to the viewing experience. There are the usual pop out rain effects and plenty of depth for the taking, but even the extra width of the 1.85:1 presentation just seems wasted on what is just a kids cartoon. The good news is that the animation is pretty much faultless.

Power hungry Police chief Maynott receives reports of a “Monster” and seeks out to capture and kill the beast, mainly for the benefit of his own ego. Unfortunately his love interest the erstwhile Lucille encounters the monster first, christening him Franc and discovering his amazing singing voice and all round musical skills. This really is a beautiful scene of the film. The setting is detailed, the song emotive and the sound track extremely well recorded. A real highlight.

During the ongoing investigation, Emile and Raoul's secret of the laboratory incident is blown and they are arrested. Brought before Maynott, Emile and Raoul think they are going to prison, but due to Maynott's interests in the creature, they are commended as heroes and are given the Legion of Honour. On a challenge he had been set earlier by Lucille during an altercation, Raoul uses the badge as an advantage to get the best seats at Lucille's show, which she had promised him. After the show, Emile and Raoul come to congratulate Lucille on her show, but upon been greeted by the musician, Lucille reveals the identity of Franc.

In their haste to leave the club, they are discovered and a chase across Paris ensues, concluding at the Eiffel Tower – empty due to the river flooding around her feet. A little mild terror is involved both during the chase and on the Tower itself, but nothing that all but the most timid of children will be scared of. Emile’s beau Maud is now also involved as he has invited her on a date and she was waiting for him at the Tower as they arrived. Catherine with Emile, Raoul, Lucille and the Monster has floated across the Seine carried on an old barge, pursued by Maynott in his human powered airship. The Police chief proves he is not beyond some pretty strong coercion, with both heroines placed in mortal peril due to his actions.

Without giving away too much of the ending, all ends well. Maynott gets his comeuppance and both Emile and Raoul get their girls. It even works out for the Monster!

At nearly 90 minutes long, this film feels a little stretched at times. Although pleasant enough it has neither the depth of story to absorb or enough action to thrill. The humour is subtle with very little slapstick. An OK rainy Sunday afternoon film, but I don’t see many children watching it over and over. Maybe it worked better en Francais? Some critics loved this film, but it is written for children and I do not think that they will appreciate it as much, mine certainly didn’t.