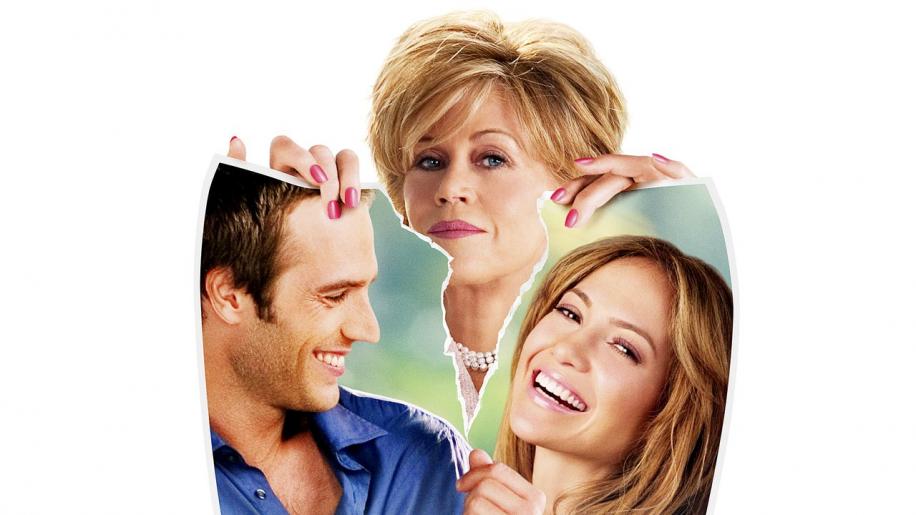 It has often been said that there are so few acting jobs for elder women when compared to men; as an actor ages, so to do the various jobs, both classic and contemporary. No so for the ladies. The are, of course exceptions, our own Dame Judi Dench after a life time on stage and TV has started to forge for herself a well respected reputation as a film actress, parts like M in the Bond franchise having a distinct bearing on that fact. Others may not be so fortunate. Take for example Jane Fonda, a five times nominee and two times winner at the Oscars, plus a plethora of other awards, perhaps sensing a lack of work, or because of it retired from acting in 1992. Yet after fifteen years she has been wooed back to the limelight in a new romantic comedy from the boy, sorry, man that brought us Legally Blonde called Monster in Law (MiL). Right from the outset there was a lot of publicity reminding us of that fact that this is Fonda's first film for fifteen years, as if to use her credentials to raise expectation of the film, in the end though, even her stellar reputation cannot save this film from mediocrity.

Charlie (Jennifer Lopez) is a bit of a flibbertigibbet, content with drifting through life, letting the stars dictate their wisdom while laughing with her friends, taking temporary jobs and painting when the mood takes her. Kevin (Michael Vartan) is a career minded surgeon, charming and successful, he is nonetheless still shy when it comes to girls. Viola (Jane Fonda), Kevin's mother, is an aging though hugely successful daytime TV chat host about to be replaced by a younger presenter, this has the unfortunate side effect of causing her a mental relapse forcing her retirement. When Kevin falls for Charlie after a whirlwind romance they agree to marry, much to he the shock of Viola, who takes it upon herself to try and sabotage their engagement and thus preserving her own mother/son relationship. Thus the formula is written, the numbers added, the result predictable.

Ok, I'll admit up front that I am not the biggest fan of romantic comedies, in fact in a list of top all time favourite genres it would come below daytime TV. That said, I fully understand the concept, I quite like Big with Tom Hanks and can appreciate the nuances and find the good within a well told story. Just so you know that when I say Monster in Law is rubbish, it is the film I am rubbishing not tarring all with the same brush.

To say MiL is formulaic would be an insult to formulaic films; this is purely a by-the-numbers script with so little time for characterisation that the viewer is not interested in the outcome, because we know the outcome already. The script though asks us to believe in the most outlandish action that credibility is taken to the upper most limits. The madness on screen maybe to represent the madness of Viola's mind, I personally put it down to poor scripting. Director Luketic, young and inexperienced, as he his, does know his stuff, unfortunately it takes more than pointing the camera at the leads and watching them spout. Fonda was quite a diva in her time, but the last fifteen years seem to have turned her into an old ham. The part does call for an eccentric woman on the verge of a nervous breakdown, but flailing arms and maniacal laughter, please. Lopez is content to look sweetly pretty, in a role that would have been fine for any twenty something actress. The chemistry between these two leads, the entire point of the film, never seems quite right. Again, this is probably a scripting problem as neither actress has a chance to shine, there are a number of verbal sparing scenes, I can imagine these looking and sounding terrific as say Olivier and Caine in Sleuth (picked for the similar ages and standing) did. Unfortunately we have something more akin to Abbot and Costello, no drama and poor excuse for comedy. The final lead, Vartan, like Lopez's role could easily have been handled by any twenty something actor, though this pair do share some chemistry, even if it is forced on us by a tickling scene. Lovely homage to his other love; Jennifer Garner was one of the party guests. Special mention must go to Wanda Sykes as Ruby, Viola's long suffering aid. She is perhaps the best character in the film and the sparing between her and Fonda make for the funniest and best moments bringing this one back from the brink.

As the final credits roll I could not help but feel for Fonda, this was hardly the triumphant return to the cinema she must have been hoping for. MiL is predictable, bland with little romance and precious little comedy I am astonished to see it nominated for awards, albeit Teen Choice awards. Just goes to show that old hacks like me don't know everything, perhaps this really was the return to form Fonda was after, after all. I wish her every success.