"To kill a monster you need a monster." 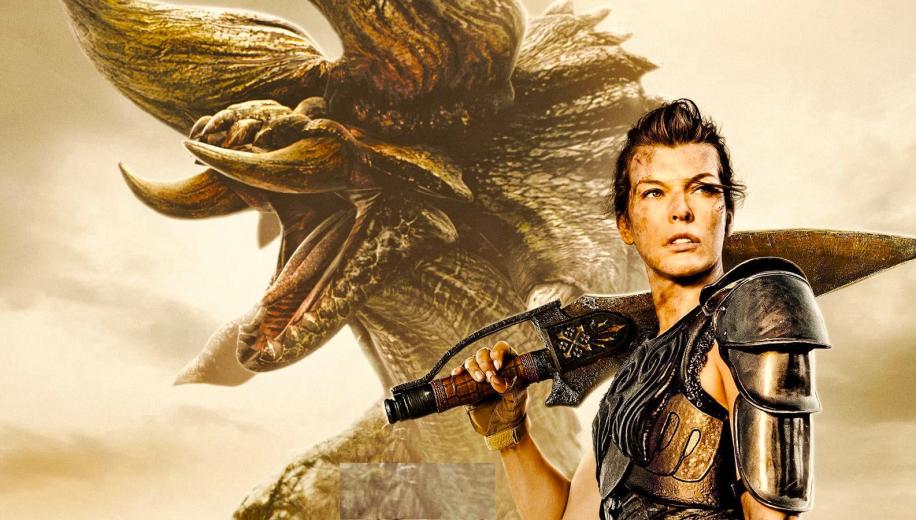 Following their slew of trashily entertaining Resident Evil adaptations, the Paul Anderson / Milla Jovovich duo set their sights on the Monster Hunter videogame franchise, with the film hitting US 4K Blu-ray before it's even had a UK cinema release.

Anderson and Jovovich have got a hell of a good deal running. The husband/wife, director/star duo have churned out a slew of largely nonsense features yet been consistently gifted tremendous blockbuster budgets, no doubt partly thanks to the in-built videogame fanbase which helped carry the paper-thin Resident Evil franchise through a whopping six instalments (the last of which being utterly terrible, amidst its consistently watchable predecessors). Seeing that franchise as dead - albeit now due to be rebooted - the pair have cleverly shifted to another popular gaming franchise on the eve of the latest game instalment, and arguably, but for the pandemic, would have likely found this the start of a series of stupid-but-frivolously-entertaining jaunts designed purely to milk the fanbase while giving Jovovich a new mainstream role to run with.

Monster Hunter is utter nonsense, but you'd be kidding yourself if you didn't know that going in

Monster Hunter is utter nonsense, but you'd be kidding yourself if you didn't know that going in. It's called Monster Hunter, after all, and it's from the director/star who brought you the Resident Evil films. Really, if you know all that and are still watching it, you can't start complaining about a lack of coherence, scripting, character design and overall quality. So, judging it largely in comparison to the duo's last outing - the incoherently-edited Resident Evil: The Final Chapter - and you find this is actually a modest step up. It's trashy, throwaway stupidity at best but, once you get past an arguably unnecessary real-into-videogame-world setup (which sees Jovovich's soldier and her team cross into a hidden dimension of Ray Harryhausen creatures), you find yourself in a fairly tightly paced action romp. The movie takes you on some pretty tense - considering the PG-13 rating, this pushes the envelope - giant spider chases echoing Pitch Black thrills, battling Dune-like sand-beasts and finally going toe to toe with a Godzilla (KOM)-infused Reign of Fire mega-dragon. It's a shame that the film doesn't quite go full scary-Kaiju Pacific Rim-style, but the action is still well staged and surprisingly frenetic.

Jovovich is also as reliable as ever when it comes to commanding stuff like this. She's pretty used to videogame-based film stupidity by now, and has a good line in committing to it with that perfect balance of of stone-cold seriousness blended with a twinge of vulnerability that she does so well, still acquitting herself admirably in the action department (even if the flash-editing does clearly allow room for plenty of stunt doubles along the way), and getting paired with Tony Jaa for further mayhem. It'll almost be disappointing when we don't have another slice of silly Milla action to look forward to like this. Perhaps the worst extended cameo - but for a really out of place giant CG cat, although it's neck and neck who looks more ridiculous - is original Hellboy Ron Perlman, who is just way beyond the stage where he should be dressing up in full blonde wig and steering a giant galleon. He looks like Will Ferrell in that Netflix Eurovision movie, and it's a woeful bit of miscasting even in something as frivolous as this. Really, though, Monster Hunter does just about exactly what you'd expect it to do. It's better than the last Resident Evil, making it a step up for the Jovovich/Anderson duo, and it doesn't harm it that it looks and sounds tremendous, making for a vapidly fun piece of fluffy entertainment.

Whatever your feelings about the rest of the movie, it's a hell of a visual spectacle.

With enough budget behind it to fully realise its more outlandish components, and add some decent scale to the endeavour, which remains comfortable in its desert locales and spiders' tombs, Monster Hunter certainly looks the part. It's another modern digital production where you would be hard pushed to quibble over the ostensible technical 'limitations' of a 'mere' 2K upscale, delivering superb clarity throughout, some excellent creature detail, seamlessly integrated effects, palpable battle damage and fine texturing on the characters. Maintaining a healthy bitrate throughout, there's little problematic about this visually impressive feature, which clearly uses fast editing to cover up myriad issues (relating to human vs creature interaction, certificate restrictions, and stunts/cast limitations) but seldom lets anything show on the outside, affording some really pleasantly finely detailed moments (the slo-mo, zoom of Jaa's poison-laden arrow, for example).

HDR and WCG push it over the top, tackling the extremes of the pitch black spider-battles (which really push the PG-13 boundaries likely into 15 territory for the UK) and the bright, eye-searing sun-bleached desert sequences, whilst affording some nice highlights, nominally in the form of the fire-infused weaponry which lights up the sky particularly during the final act. Ironically, some of the military sequences push the spectrum even farther, and perhaps too far (the colourful popped smoke signals when the Osprey lands; even the damn vibrant burgundy seats in that same vehicle) before we get yet some excellent fire-breathing dragon flame highlights which are utterly spectacular. Whatever your feelings about the rest of the movie, it's a hell of a visual spectacle.

Forgive the pun, this is a monstrous soundtrack

Dialogue is delivered with clarity and precision throughout, however unimportant it remains in this particular feature (not least due to the fact that the two leads do not speak the same language!), clearly prioritised across the frontal array. The score is at times shamelessly riffing on M82's work for Oblivion, albeit trading in a distinctly lite variation, but giving the surrounds further fuel for the fire, but it's the effects which really stand out, rattling out minigun rounds with a fury, delivering huge monster roars, creepy mega-spider clacks and an array of boisterous videogame-inspired action sequences with wild abandon. Surround dissemination is on point, affording some nice object-based work, and the LFE input is suitably thunderous. Indeed, coupling this excellent track with the stunning visuals, it makes for a surprisingly intoxicating AV experience which no doubt informs your enjoyment of the more paltry movie content itself. As our very own Steve Withers noted on the podcast: "forgive the pun, this is a monstrous soundtrack."

Sony's 4K release of Monster Hunter offers a smattering of extra features - the same ones on the accompanying (and separately released) Blu-ray, but at least ported over onto the 4K disc proper.

A smattering of extra features

There are a trio of modest Featurettes - running 5-8 minutes in length - which look at the games, the franchise, Anderson's love of the source material, the characters, cast, creatures and weaponry, as well as a couple of short Deleted Scenes, with the extras rounded off by a Trailer.

A step up for the Jovovich/Anderson duo, and it doesn't harm it that it looks and sounds tremendous, making for a vapidly fun piece of fluffy entertainment

Sony's US 4K Ultra HD Blu-ray release of Monster Hunter beats the UK cinema release out of the gates, making this an easy choice for import for those wondering which streaming platform the flick is going to launch on over here. It's a tremendous disc too, with excellent video and audio and extras ported over to the actual 4K disc itself. Fans, if anybody out there is willing to admit to being such, will find it a worthy purchase.

MONSTER HUNTER IS NOW Available IN THE UK to Download & Keep from September 6 And to Rent on Digital, on 4K Ultra HD™, Blu-ray™ and DVD on September 20