Not quite as frightening as it seems 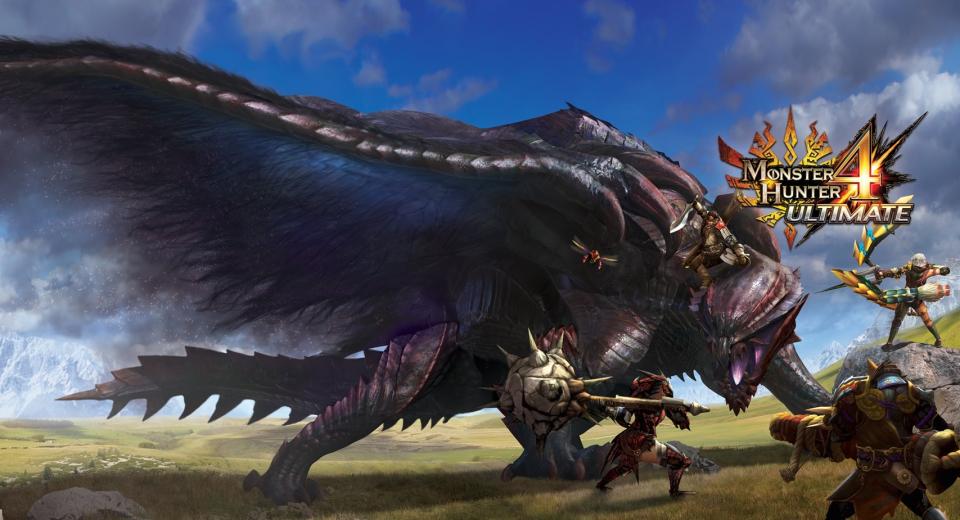 The Monster Hunter franchise is something of a phenomenon. Worldwide sales continue to impress but few series have managed to sell and yet be so polarising.

Not only is its success heavily weighted towards Japan, where it’s a veritable system seller, but it’s also gained something of a reputation as being hard for newcomers to get into.

Now, with Monster Hunter 4 Ultimate’s release on the new 3DS, that could well change, as this entry is being lauded as the most accessible yet. The staples remain the same though, with more monsters to hunt, more weapons to use and an even greater variety of things to fashion from scavenged materials.

That variety has always been at the centre of the appeal but, with every instalment, the question of whether it's a fans-only series at this point linger in the minds of those currently outside the circle.

As someone who’s generally only dabbled in the series, this seemed like the perfect enticement: the new 3DS, complete with its C-stick should help cure some of the criticisms of the camera, and with a reported easier incline for beginners, this could be the title to convert those yet to feel the draw of the hunt.

MH on the new 3DS Let’s start with the improvements of the new 3DS first though. The camera isn’t as game breaking as on the old model, but it’s far from perfect. Its responsive when you want to snap back behind your character or lock onto an enemy, and in that sense it passes muster. However, there’s a good deal of verticality in the game, and it’s key to some gameplay elements.

The ability to jump onto a monster’s back and rodeo ride them, slashing at intervals and hanging on, means you need to be able to see what’s beneath a ledge quickly. This is where the C-stick really comes in handy. The virtual D-pad that resides on the touch screen just doesn’t compare to having the full control the little analogue nub provides. I’ve no doubt those with vastly more experience may be able to get by without this, but when you’re new and acclimatising to the controls and how the physics of battle works, the C-stick helps immeasurably in getting your bearings whilst not being blindsided.


The need to jump onto a monster’s back and rodeo ride them means you need to quickly see what's below.

Elsewhere, there are further benefits to using the new 3DS model including faster load times (start up load times were notably improved) and what appear to be slightly better textures. It’s a good looking 3DS title, but it still displays the constraints of the handheld when processing three dimensional environments, so in that sense it’s not necessarily a huge selling point for the new model.

For owners of both old and new though, there’ll be fresh weaponry to play with, including a new Charge Blade and Insect Glaive. The most interesting of which is the Insect Glaive, a combination of staff and Kinsect. A small bug can be dispatched to drain the juices from a monster which will then work as a temporary buffer. It also has a smart upgrade system, where the two parts can be upgraded separately but the bug’s development will have an effect on the power of the weapon. Feed it nectar, and it’ll earn Growth Points,which in turn will boost stats and eventually it might even evolve. Getting into the game certainly isn't as daunting as I’d expected. There’s a good amount of text, broken up with simple early quests that help introduce you into the world. As an action RPG, it’s almost standard fare, in that the rules are explained and your first few hours will be spent getting to grips with the combat and systems that surround it through a series of tutorial quests that can be replayed if necessary.

How to gather materials and herbs, make a mega potion and mine ore, it’s all there, and handily the information is always a few button presses away. It’s in these early moments that it strikes me just how poor a job the various demos have done down the years in selling this series. They’ve tended to offer a basic hunt, but in doing so they’ve steered people towards the end of the process, and not given them an inkling of where the meat of the game really lies.

There’s a lot of depth, and things to learn, but it doesn’t feel like you’re being hit over the head with an instruction manual. Yes, there are some clumsy tutorials that fail to break up the text with examples, but as the advice given is always accessible and experimentation is one of the key facets of the game it’s very forgivable. The large part of what you’ll learn comes by way of interaction, and it’s here that one of the less expected pleasures of Monster Hunter raises its head: the characters. It’s full of odd figures, and the script is surprisingly sharp, perhaps more so than it needs to be at times, as the characters come up with quirky phrases, and even seem to be breaking the fourth wall with a wink. I always appreciate some hammy characters with their own distinctive vocabulary. Thanks to them, it’s one of the more hospitable action RPGs in terms of easing you into the very basics.

Obviously the same segmented map design is back, and I dare say this has been one of the major bugbears for some gamers. It does seem strangely antiquated, particularly when an enemy several times your size disappears into a hole that’s really an invisible wall. However, once you get out of the mindset of this being a world, and think of it more as a series of mini arenas, it all starts to make a bit more sense. With the myriad of new mid-air strikes and the rodeoing ability, the ledges in certain areas are well placed in a battle arena fashion. It’s still a lonely experience on your own though, and director Kaname Fujioka admitted that the series has always relied on playing with others, explaining that the dense population in Japan - and therefore greater prevalence of local multiplayers - might explain why it’s failed to achieve the same success in the West. Luckily there's both local and online multiplayer for up to four hunters. Not being tied to single player progression makes it a far more care-free experience too. Once you’ve enjoyed a four player hunt, the single player almost becomes a place to hone skills, experiment, and perhaps sit back, cook some meat and take in the vista.


It instills in you fairly early on the idea that there aren’t any corners to be cut.

Careful management of resources in your quest is vital, and all time is precious if you haven’t planned well enough. Backtracking to a quiet spot in order to get your inventory in order or collect items is unlike most games out there, in that there is no pause on the clock to leaf through menus and micro manage. For a title built on such a wealth of weaponry and information to process, this can be an initial barrier to enjoyment. As can the combat, which still looks wholly unlike it plays.

The hardest part of getting into the game is shaking off this thought that because it looks a bit hack-and-slash that it should play a bit like that too. It's a lesson that only a few failed quests can really teach. You quickly learn that all movement has to have a purpose, and that you're working to be precise - even with a weapon that sweeps in half the environment with its arc. The stamina gauge that depletes with rolling starts to look less like an enemy, and you can begin the long process of utilising the myriad mechanics that lie underneath.

It instills in you fairly early on the idea that there aren’t any corners to be cut; how you grow into the game is dependent on how much time you can give it. You need to commit wholeheartedly to the game’s systems if you are to gain the kind of satisfaction it can offer.

Monster Hunter 4 Ultimate may be the most accessible in the series, but that certainly doesn’t make it an easy ride. The early difficulty curve is well measured and the information necessary to acclimatise is concise. But the game requires the kind of time commitment overall that fans will automatically be clearing schedules for, and newcomers may be unprepared for.

It definitely shows the worth of the new C-stick, as holding the high ground can gain you a key advantage, and though it's not a full analogue stick, it still gives greater precision than the other camera options. The multiplayer will probably steal the show for those who’ve come late to the party though, no matter what console their on. It’s easy to tag along with others, and enjoy the hunt whilst picking up combat strategies along the way.

It’s a deceptive game. With a basic premise, and the looks of a somewhat clunky action-RPG, the heart of it is far more complex. It’s also elusive, so to all but the initiated the first few hours will seem full of concepts and design mechanics that are familiar, but just ever so slightly different from what feels totally natural. If you can get through those early moments though, the game may well have you snared for the next hundred hours.