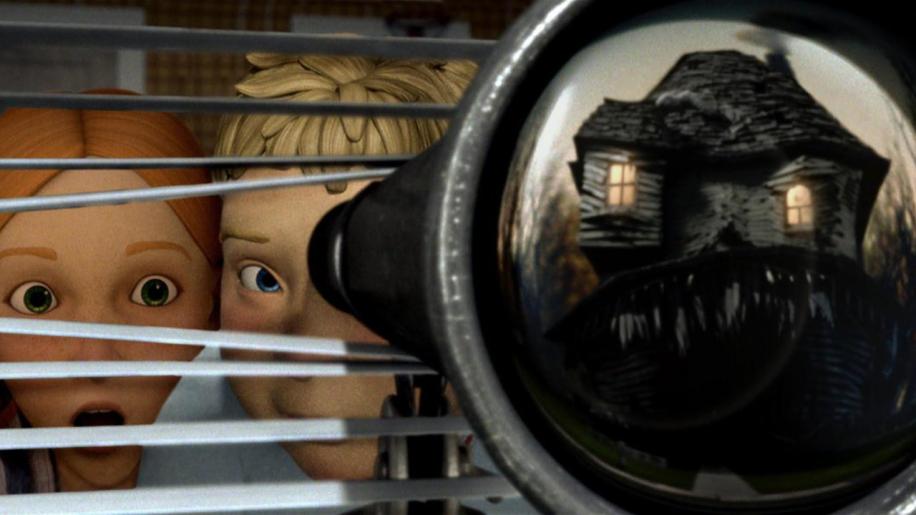 It's rare for a film title to sum up its plot. Oh, it can be done, of course, Spunky Birthday is one example (for any Newman and Baddiel fans out there) and another would be the subject of tonight's discussion; Monster House. Quite obviously the film is about a house that is a monster. Factor in the computer animation and the low rating we have film aimed fairly and squarely at kids. Unlike Pixar and their adult story writing abilities aimed at kids, Monster House takes a safer route and plays it dumb. At least that was my first impression as the film started spinning in the Denon. Then the House woke up; and things took a turn towards the sinister, for you see Monster House is quite a frightening little film. More so that I expected it to be. Of course fairy tails, especially Brothers Grimm, have a nasty streak running through them, and it's true that kids love a mean streak themselves, but there are elements in Monster house that are just ghastly.

The 'monster house' of the films title is a typically dilapidated house on an otherwise typical suburban American street; it seems to be common place in any suburban American street that at least one house must fit this description. The owner is typically recluse and grumpy with children, a Mr Nebbercracker, and why he hasn't had gangs of parents lining up at his door demanding compensation for breaking and stealing children's toys while terrorising them is quite beyond me. Anyway, opposite is D.J.'s house, a near adolescent that spies 'Rear Window' style on Nebbercracker's antics. Through a series of events, D.J. ends up being caught by Nebbercracker on his lawn, but in his fury he collapses and is taken away to hospital, it this action that causes the house to wake and seek revenge. D.J., his best friend Chowder and Jenny, a girl they saved from being eaten by the house, try to convince the authorities of the problem, only to have the police eaten themselves. This leaves our intrepid trio to try and stop to the house on their own before Halloween evening and the thus prevent the hundreds of Trick or Treaters being swallowed. Will they succeed in time?

The film clearly shows its inspirations on its sleeve; Amityville and Poltergeist to name but two. And these are laudable inspirations, the film looks and feels like a scary movie, made all the more real by Nebbercracker. He is a distinctly evil piece of work, even if, as we find out later, he is acting out of kindness. His actions at the beginning of the scene, terrorising the little girl on her tricycle then physically shaking D.J. are committable offences. And whist they do insight fear, it is the wrong kind. So to with Bones (D.J.'s babysitter's boyfriend) when he violates D.J.'s cherished toy, his actions are plain mean, and the wrong kind of mean. Now I can see why these characters were given such direction, their respective pay offs need an amount of build up to work, but their execution is so thoroughly reprehensible it turned me off straight away. However, once the action moves to the house things become far more adventurous and the tone shifts to peril, the action and pace racing along. The chemistry between the three leads is infectious and once they hatch their plan we gleefully cheer along; the horrors at the beginning clearly serving their purpose. Once they, and as such, we discover the reason for the House's and consequently Nebbercrackers actions some much needed empathy is introduced and with it resolution for the conclusion. And, of course, it all ends well.

The film clearly then hits most of its targets, even if it takes a little while to realise them. I'm prepared to admit that my jaded adult views maybe leading me astray because my two sons found the film to be thoroughly enjoyable. Unconcerned with the nasty build up they were happy that everything work out fine and thrilled at being scared and excited by the chase! Out of the mouths of babes huh? In fact no sooner had the disc finished, than it had to go on again. And whilst my apprehension about the film never changed, their infection enthusiasm swayed me from being too harsh.

A lot of the films success rides on the characters of D.J. and Chowder, the respective actors real life chemistry spills over on screen, and it too becomes infectious. Thankfully so because all the other parts are woefully underwritten, oops there's that adult talking again, because apparently 'it doesn't matter about anyone else as long as the boys, and that girl, can beat the house'..... The filming method used for the film is called 'performance capture', in essence it is motion capture but with facial expressions as well as raw sound too. The same technique was used by Peter Jackson for Gollum and Kong. Combined with the animation style but realistic motion this makes for an interesting picture. The camera movements are positioned after the principle capture and since it is purely digital some wonderfully obtuse angles can be obtained, this gives a surreal but somehow real base upon which to hang the film; there is always something to catch you eye and keep you involved. So, there is an amount of enjoyment to be had from Monster House, a scary story that manages to entertain with enough happening to warrant repeat viewings. Just try not to let the adult in you get in the way.