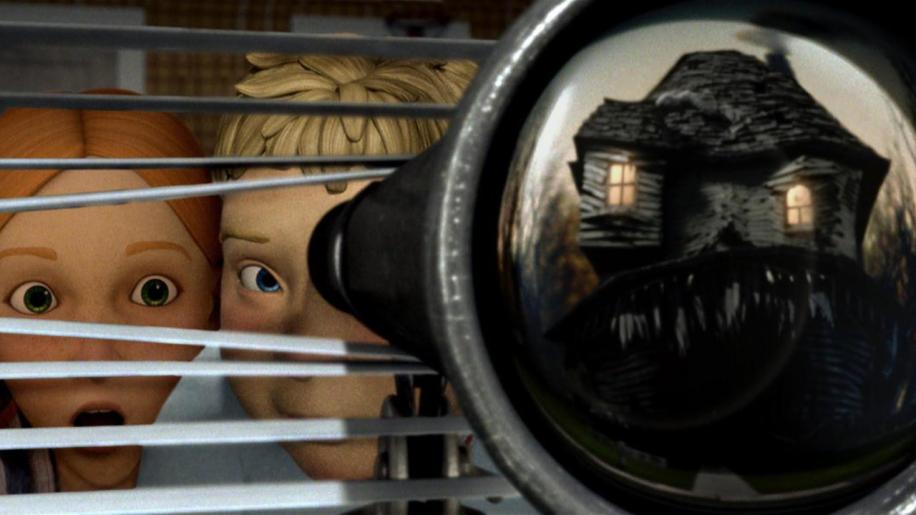 Monster House came along and went unseen by many people on its theatrical outing in the UK. In fact, if it hadn't been for the eye-catching poster campaign that seemed to adorn every bus and billboard - at least where I live and work, anyway - I doubt many would even know of its existence. The problem almost certainly lies with the film's dark premise and frightening narrative that deviates from the normal family-fantasy flick. Playing out like a comparatively adult horror film, Monster House builds up a slow-burn escalation of spooky incidents that glibly push aside the fun and games that kids expect in their big new CG spectacle in favour of some fairly intense episodes of pulse-pounding excitement and suspense that prove pretty galvanising for the grownups too.

“Do you want to eaten alive?”

Taking its premise from the notion that every neighbourhood has its own scary building, or Monster House, director Gil Kenan's film charts the involvement of three young teens, DJ (Mitchel Musso), Chowder (Sam Lerner) and Jenny (Spencer Locke) in the mystery surrounding the curious and foreboding house of crotchety old Mr. Nebbercracker (voiced in excellently screechy fashion by Steve Buscemi). With DJ's parents away for a few days and Halloween fast approaching, it is the quintessential American horror set-up, babysitters and dumb patrolmen also included. Once Nebbercracker has chased off a child too many from his property - you may not have had a haunted house in your street, but you certainly had a neighbour like this - fate steps in and his lifeless body is whisked away in an ambulance. “The siren wasn't on,” gasps Chowder, “that's not a good sign.” But the House misses him and begins to step up its campaign of terror on the kids. Earlier scenes of balls, bottles and other unfortunate items that contrive to end up on the Nebbercracker lawn being sucked down into the earth give way for a much more full-blooded series of attacks. Of course, no-one, especially DJ's rock-chick angsty babysitter, Elizabeth (“It's Z, actually.”), voiced by Maggie Gyllenhaal will believe them. Even her airheaded, dude-speaking waster of a boyfriend, Bones - one half of a failed metal duo called Skull and Bones - and voiced by Jason Lee just dismisses the unsettling thought of “a phone-call from beyond the grave” as just kid's stuff. But we all know that this is no Scooby-Doo escapade and once the House starts sprouting jagged-floorboard-fangs, demonic glowing eyes and a pair of taloned hands and displays a sick tendency to devour trespassers, all bets are off as the film moves out of sly, creepy tension-building and into a riotous cavalcade of eye-popping pyrotechnic abandonment. The plot is simple and adheres to a pretty routine series of dotted i's and crossed t's, but is no less effective for slavishly following such a formula. Throw in a couple of reasonable twists and a neat Tim Burton-esque revelation and Monster House wins quite emphatically and becomes a great and decidedly edgy addition to the family CG fantasy stable. Kids will love it, but I believe adults will actually love it more.

Incorporating a similar CG technique as the previous year's The Polar Express, whereby the cast don motion capture suits and are then animated-over, the imagery is almost photo-realistic, ensuring that Monster House is immediately immersive and involving. But the clever thing here is that the imagery remains steadfastly cartoonic and engagingly pleasant to look at, whereas Polar Express featured CG characters who seemed strangely static and far too melancholy, the obsession with realism ironically sucking dry every ounce of fluidity and life from them. Here, though, the characters may look artificial yet they move with incredible realism and a studied authenticity that is entrancing to watch. They have weight, poise and a totally believable and comprehensive roster of gestures and mannerisms. But what makes Monster House really stand out from the crop of CG features is the cinematography and angles that Gil Kenan employs. He guides us into this fantastical world with a constantly roving camera and plentiful upward-looking shots to enhance the size of the environment around the kids and the threat posed to them. Apart from Pixar's The Incredibles, I don't think that I've seen an animated film look so cinematic. Kenan favours lots of close-ups of faces and some terrific zooms - check out the way he supplies views from over a character's shoulder, and the way he takes us on prowling visual curls around his subjects whilst they and the camera both move simultaneously. Frequent handheld-style shooting adds yet more credibility to the on-screen action and his immaculate compositions - which you would think would actually be a lot easier to attain with animation because of the control the makers have over the medium - always look three-dimensional and supremely well-lit.

“I think you're freakin' out 'cause you killed a guy today!”

The winning attributes of the film don't end with the crafty and inventive animation, either. Perhaps its greatest asset is its conviction to the horror genre that has influenced it. This dark supernatural approach pulls in all the familiar old formula traits and trappings that would be utter stale cliché were they to be found in the traditional stalk 'n' slash flicks that first introduced them, such as the way in which un-likeable characters are set up in a way that has you waiting eagerly for them to be devoured. And especially with Halloween looming on the plot's horizon, the kids on this spooky street can certainly feel the mighty influence of the once-great John Carpenter, whose terror-laced Haddonfield tingles through every fibre of this production. Even his filmic interpretation of Stephen King's Christine is referenced with scenes of the House rebuilding itself and hauling its vicious evil façade back into some semblance of suburban normality after a raucous bout of hideous transformation. But there's not only Carpenter to be glimpsed through the movie's sheen of pixels, for there is a tremendous dose of Sam Raimi's hyper-kinetic visual dexterity at play here, too. Nebbercracker's collapse onto us, some frightening pipe-work aggression and plenty of tree-terrors lovingly evoke memories of The Evil Dead, whilst the ever-moving camera gives the innovative director a run for his money in the cinematic acrobat department, though a lot of this visual pizzazz is clearly inspired by his own outlandish techniques. The homage game continues unabated with the aforementioned Tim Burton who is recalled by the film's subtext of the persecuted outsider, and the whole twisted carnival idiom that it develops its story from. And, of course, with Steven Spielberg as one half of the executive producing team (the other being Robert Zemeckis), his uber-touch is very prevalent, as well. Hence we get to revisit his strong early themes of suburban invasion by something decidedly other, with Poltergeist being the obvious reference point, and the kid-quest ideology that he formulated so well with the likes of ET and even The Goonies (yeah, Donner directed it but, like Poltergeist, the Berg's hallmark is all over it). You could also claim that the alien spy-cam from War Of The Worlds gave rise to the great sequence in which DJ, Chowder and Jenny attempt to avoid the eye of the House once they have been drawn into it. Heck, even when the House finds the ability to move about of its own obsessed accord, it comes to resemble a much more solid incarnation of the Krell Id-Monster from the classic Forbidden Planet - a hulking, jagged mouth on muscle-bound legs. Thus, Kenan surely reveals that he worships at the feet of the best idols in the genre.

But the point is that Monster House works supremely well despite having nicked all of these elements from past masters. Somehow it manages to take all these familiar filmic delicacies and, with a sprinkling of sheer verve, comes up with a potent new concoction.

The characters are likeable and new-wave enough to be relevant to today's audiences, and their outside issues are never laboured upon - which is actually quite refreshing when you consider that most heroes in such family fantasies have a journey of discovery to undergo and some kind of life-affirming message to deliver. Monster House doesn't need to do that. It revels in the horror scenario that it has created and simply enjoys the set-pieces that develop. The pacing is good, with the film benefiting from lesser jolts throughout the first half and more time to get to know the characters. Thus, when the big stuff finally comes along, the pay-off is considerably more effective. Along the way, there are plenty of fun asides, such as the cop duo that inevitably cruise into jeopardy (“Backup? We don't have backup. We just have Judy back at the station.”), the videogame-playing guru, Skull, that the kids look to in their time of need for Jedi-like advice, and the sniping pot-shots from a cruel-lipped babysitter that signpost any relevant societal observation and add to the flavour, but the film is much better when keeping it simple and spooky.

If I had a complaint about this film it would be that, no matter how much carnage, insanity and wreckage occurs - and the final act piles on spectacle after outlandish spectacle - literally no-one else on the street is ever seen ... apart from a few trick or treaters at the very end, that is. Oh, we get the little girl on the tricycle at the start, but it is funny how the inhabitants of the street can all ignore the truly ground-shaking activities that take place there and never once come out to enquire what the disturbance is. Had the film taken a more fable-like approach to the material then this would have been acceptable, but when it is, otherwise, at pains to be realistic, this just comes across as a little daft and, perhaps, even a touch cost-cutting. But, to end on a more positive note, the music score, by Douglas Pipes, is absolutely excellent and assuredly lays on the unease, dread and suspense with a calculated expertise, which is all the more impressive when you realise that Monster House is Pipes' motion picture debut. Listen out for the eerie and slightly heart-snagging moment when dopy Bones catches sight of his “awesome kite” tempting him from the doorway of the House. There are little elements of creepy lilting lunacy that waver through the score from time to time, led by mysterious and mischievous strings that recall early Bernhard Herrman and any number of fifties-made spook-fests.

So, Monster House is a success in my book. Eerie, crafty and a sublime visual treat. A horror film for kids that should actually appeal more to their parents. Highly recommended.