Oh brother, is it frustrating. 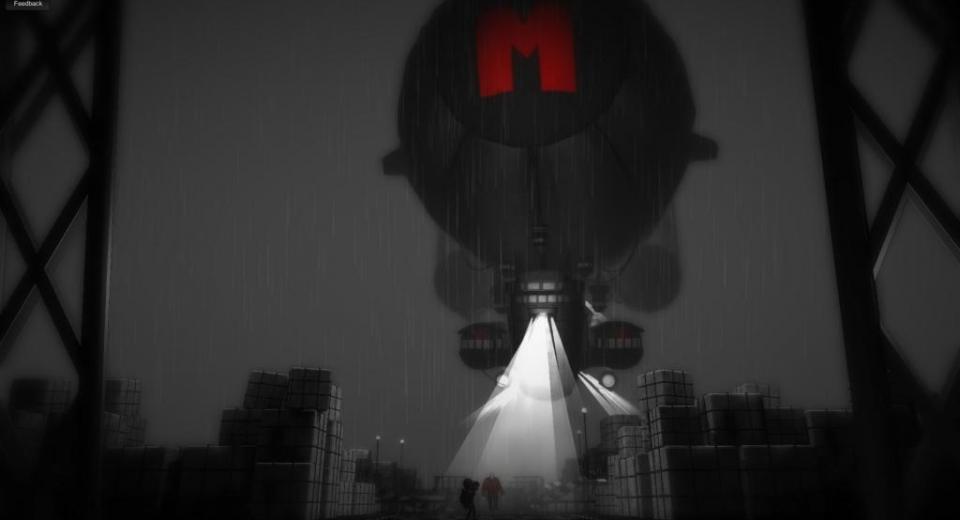 Death is common in Monochroma. By the time the credits rolled I had been crushed by mine carts, drowned in a water tank, hit by a train, zapped by lasers, ground by cogs, squashed by a gargantuan press, scorched by flame, killed by henchmen, fallen from a zeppelin, seared by molten metal, and crushed by a lift to name but a few. It’s definitely not a game that’s afraid to terminate you should you put a step wrong. It happens with such frequency and variety that it’s as though it set out to prove a point yet it’s not a rogue-like or a game of twitch reflexes where pad-hurling difficulty is appreciated. Monochroma is a modern platform-puzzler but with some very dated ideas.

Crack the cycle of death and you’ll find some neat puzzles to test your grey matter but sadly this is an awkward experience where you have to fight through multiple layers of annoyance to get to the good stuff tucked away at its core. It may look stunning in screenshots and trailers but for the most part frustration awaits. O brother, where art thou?

For a game with such old sensibilities it wears surprisingly lavish trappings. Although your movement is limited to just two dimensions the world stretches away into the distance and using a muted palette of greys the developers paint a dystopian vision of a world lashed by rain. It hints at an evil ruling power and an alternate 1950s timeline where capitalism is greater than government. Through corn fields battered by storms and dark cities belching smoke into the atmosphere you’ll run, the world sliding behind you but always so varied and beautifully constructed that you’ll spend as much time staring at the background as you do the protagonist. Dashes of red are used to great effect to pull out features and add some relief to the seemingly endless bleakness of your surroundings. It’s a glorious world and my disappointment that the rest of the game does not live up to that level of quality is great.

Most of my issues comes from the structure and clarity of the puzzles themselves. In this harsh world you’ve been tasked with protecting your younger brother, a clingy sort who can only be left alone in well-lit areas whilst you go off and look for a path you both can fit through. It’s a simple premise: you can still jump and move when carrying him but you can jump higher and move faster without the burden. Early examples see you deposit him under streetlights, the freedom allowing you to pull down crates and creating a way you both can clamber up, but soon it’s not so straight forward. Exploring barns and factories these routes become ever more elaborate with ropes and moving platforms, not to mention increasing levels of risk as the only bright spots available to pop down your sibling appear under cargo containers or in the path of precariously balanced mine carts. You can only assume the NSPCC doesn’t exist in this alternate timeline as given the places you gleefully abandon him you’d have been reported and hauled away several times over even before the end of act one. When the cause-and-effect of the situation is known then this risk adds to tension. The danger you’ve popped your brother in will make damn sure that as soon as you trigger the lift to descend towards his unwitting head you’ll be sprinting to drag him out of harm’s way. And for a while it makes good with this, presenting a series of time critical setpieces that call for just the right judgement call, committing your brother to a threat that you know will open up an escape route for you both. The trouble is that Monochroma is so willing to throw new elements at you and in such an inconsistent fashion that the rules become muddied. For a large proportion of puzzles the first couple of attempts will automatically be written off as you try and uncover whether the new elements are there to help or hinder. What happens if I flick this switch? Is the big slab of metal there to jump on or there to crush you?

This become evident extremely early on as you’re taught the dangers of water; jumping straight in without suitable floatation devices will result in a damp death but it’s ok as nearby there’s a barrel that will surely float and can be used as a pontoon. Sure it’s on fire, but that will go out when it hits the water. Long story short, it wasn’t water, it was petrol, and a screen engulfing fireball later I was sat staring at a loading screen wondering how I could ever have predicted that. Similarly later on I jump onto a rope only to find my weight added to the crate it is already carrying sent it rushing towards the earth, crushing me on impact. All would be fine in principle but so many of these situations are never encountered again that it’s hard to learn anything from them.

These are by no means isolated incidents either as the designers repeatedly teach you by death. Hammering home that you’ve done something wrong by forcing you to replay the section time and time again rather than simply letting you prod and explore. From rising waters to collapsing bridges, curiosity is almost always bookended by a return to the last checkpoint. Thankfully the loading times are relatively short but with each one the flow of your flight across this monochromatic land is disrupted and the sheer quantity of them leaves a sour taste in the mouth. For a game that no doubt wants you to feel a bond with your brother, to feel that you are his sole protector in a land of extreme danger, you never feel any emotional bond other than frustration that he’s forcing you through this. Some of the more enjoyable setpieces are where you race through the level chased by some of the mega-corporation’s goons. At these points the music pipes up and you need to stay one step ahead of your pursuer. It’s a welcome change of pace but equally one that highlights another of Monochroma’s problems as a large number of situations - both chase sequences and puzzles - require either swift movement or precise jumping and the digital controls are not up to the challenge. Lacking pad support and therefore the subtleties of analogue, the older brother handles clumsily and bar jumping straight up I had little faith any time I sent him soaring into the air that he’d land where I wanted him. With the sheer amount of time-critical moments that litter the game his erratic handling proved infuriating at times.

Compared to the backdrops too the leading characters are rather poorly developed. Your brother, a supposedly fragile child, appears to be as large as you and the act of carrying him around looks almost comical. Even without him though your character cuts an awkward figure with a set of animations that don’t match the high standard set elsewhere. He seems to float as he jumps and seeing him shimmy along a rope strung between two buildings looks clumsy. It’s sadly yet another aspect of a promising game that falls short. Monochroma is a beautiful world looking for something to fill it. Sadly what it settled on does not live up to the standard set by the high calibre backdrop. A series of obtuse puzzles that fail to communicate any standard set of rules leave you scrabbling around learning how each operates through not just trial and error but trial and death. Only the most physical of puzzles are clear from the start and those are hindered by a clunky control scheme and an unfortunately awkward leading pair.

The real shame is that with tighter controls and clearer puzzle design there is a gem in the rough hidden within Monochroma. There are some clever puzzles masked by frustrating mechanics and clunky controls whilst a potentially touching tale of two brothers lost due to perennially being kicked back to the last checkpoint. If you’ve the patience of a saint then it’s worth a look but for everyone else then do your blood pressure a favour and walk on by.