Monitor Audio has built a genuine box of tricks 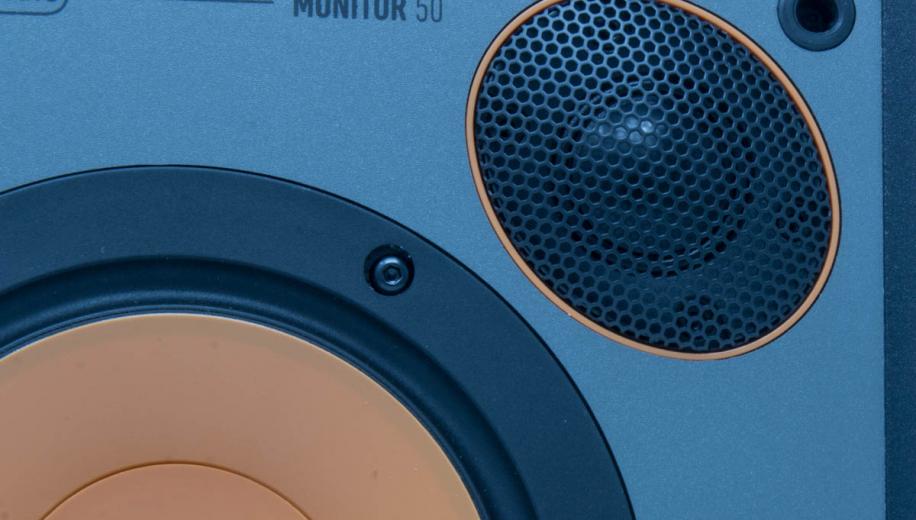 The Monitor Audio Monitor 50 is a two-way standmount loudspeaker. This is the default configuration for compact speakers and one where we have collectively tested a considerable number of affordable candidates over the years. The Monitor 50 is the most affordable stereo speaker that Monitor Audio makes. A role that was historically undertaken by the Bronze series, these have now been gentrified into a slightly higher price point. The Bronze 1 now costs more than £200 and while this is fairly acceptable inflationary creep - after all most of the rivals to it have increased in cost too - Monitor Audio feels there is scope to offer a lower priced alternative.

This affordability is partnered with something equally noteworthy. Even a glance at the Monitor 50 should be enough to show that it isn’t a completely normal effort in styling terms. The entire Monitor range has drawn some differing opinions since Monitor Audio took the wraps off it last year and the baby of the range is by far the most distinctive. Is this decision one that helps it to achieve a level of performance above and beyond what might be expected of its impressively low price point or is this simply an odd looking box of tricks? The Monitor 50 contains pretty much all the technologies that go into the wider range, albeit in miniature. At its heart, the speaker doesn’t move away too significantly from the ideals that Monitor Audio has been working on for decades but the manner in which they manifest themselves is a little different. Most importantly, the drivers in use still feature (if not completely qualify for the statement ‘are made from') metal which is something that has defined the company’s product for many years.

In the case of the tweeter, the technology is immediately discernible from other, more expensive models. The 25mm dome uses the C-CAM principle (Ceramic Coated Magnesium and Aluminium) that has underpinned Monitor Audio speakers for a very long time. The one used in the Monitor range forgoes the distinctive gold coating that I’ve hitherto associated with the design and uses a black anodized version. This change to the colour has done nothing to alter the performance which Monitor Audio claims has a high frequency response of 30kHz. As ever, this is a figure utterly inaudible to anyone reading this who doesn’t hang from a rafter during daylight hours but it does auger well for the behaviour in the audible spectrum which eschews the recently en vogue practice of being set very low and instead crosses over at 2.8kHz. The matching 130mm mid bass driver is more unusual both in construction and appearance. Instead of more C-CAM, it uses an approach called MMP (Metal Matrix Polymer). This is a polypropylene base material which has metallic particles added during the construction process. The thinking goes that the metal adds a degree of rigidity to the mix and this combined with carefully controlled implementation of the thickness at key points, ensures that the driver is as stiff and light as possible. Monitor Audio has then gone and painted the driver a vivid orange colour - more of which in a bit.

As the cabinet is fairly compact, the bass response is augmented by one of Monitor Audio’s HiVe II bass ports. These use a channelled port to better control the airflow through the port and reduce the noise levels. This is effective and if you need to use the Monitor 50 in close proximity to a wall, a pair of foam bungs are supplied. The port can’t work miracles, this is a small cabinet and Monitor Audio’s claim of a lower response of 55Hz is almost certainly achieved at considerable roll off. This being said, it is competitive with pretty much anything else at the price point. The terminal panel in this case supports single wiring via a pair of usefully sturdy terminals. Monitor Audio has been one of the ongoing supporters of biwiring but at this price point it’s fairly superfluous and I don’t think most owners will miss it not being here. All this is placed in a cabinet that is to all intents and purposes a cube, 20cm across the front axis and a little more along the depth. This makes for a fairly distinctive speaker and Monitor Audio is only getting started. Unlike the Bronze and Silver models, the Monitor has a front panel finished in a different colour - in this case a grey matte - to the rest of the cabinet. As if to emphasise this, the mid bass driver is then sprayed a fairly vivid orange. Monitor Audio describes this as a ‘playful twist’ which might be the first and indeed only time that I’ve seen the phrase used in terms of loudspeaker design.

And do you know what? I really like it. From the moment that the pics of the range appeared they have divided opinion - some of the comments on this forum when the news story appeared hovered on the edge of outright dislike. I think that Monitor Audio has made a good call though. They have tapped into the retro theme that still dominates a lot of design language at the moment and produced something that has a pleasant tinge of speakers of yesteryear without looking like it belongs in a museum. This is helped by the choice of a black, white and dark wood finish that alters how retro the overall effect is and the inclusion of grilles that allow you to keep the orange hidden if you have a real aversion to them. I don’t know how well it will date but for the moment, I think this is a cool looking speaker.

It’s also an unreasonably well made one for the asking price. I don’t think it is possible to make a product of this relatively large size feel truly biblically bolted together for £160 but the Monitor 50 is pretty much competitive with anything on the market under £300. The cabinets are reasonably inert and Monitor Audio’s customary attention to detail is still present too. There is a thread mount on the rear panel that allows for simplified wall mounting and the fitment of a tweeter guard makes using them with the grilles off and small children around a simple enough thing to do. The Monitor 50 contains pretty much all the technologies that go into the wider range, albeit in miniature

How was the Monitor 50 tested?

The Monitor Audio was placed on a pair of Soundstyle Z60 stands and connected to a Naim Uniti Star running off an IsoTek Evo3 Aquarius mains conditioner. Over the course of testing they have also been used with the Chord Electronics Qutest, a Rega Planar 1 Plus turntable and a Michel Gyrodec with SME M2-9 and Nagaoka MP-200 cartridge running into a Creek Audio OBH-MKII Phono Stage. An LG 55B7 OLED has provided terrestrial and on demand TV via HDMI ARC. Material used has included lossless and high res FLAC and AIFF along with DSD and some Deezer via Chromecast. Additionally, some testing has taken place with vinyl and TV material. As a reviewer, I am frequently spoiled by the hardware that passes through for testing. I’ve listened to some truly outstanding - and expensive - speakers over the last year or so. Despite this, I have an ongoing soft spot for affordable hardware that is done well. Speakers like the Mission LX-2 and products like the Rega Planar 1 Plus and Yamaha WX-AD10 are fine examples of equipment that punches well above its weight. Given Monitor Audio’s form over the last few years, I had high hopes for the Monitor 50.

These hopes have pretty much been met in their entirety. An hour after connecting them up, I realised that I had been listening to them in the absence of any other form of work. I have spoken in the past - at length - about joy. It’s not a measurable phenomenon and it therefore falls deeply into the realms of subjectivity but the Monitor 50 has it in spades. Listening to the B-Side of the original Chemical Brothers Block Rocking Beats single called Morning Lemon at enthusiastic levels, the Monitor 50 is seriously entertaining. It’s the sort of performance that has you continuously raising the volume and wondering what to play next.

Take some time to work out what the Monitor 50 is doing to elicit this response and it largely comes down to a sense of coherence and time alignment. Because the drivers of the Monitor 50 are so close together, they seem to have a naturally effective relationship with one another. The effect is quite directional - if you wander off axis, it starts to become less well defined but placed as a stereo pair and listened to in this manner, they are startlingly effective. This sheer musicality overcomes some of the minor flaws that are present in the performance. Compared to the Mission LX-2 which can generally be found for the same price, the Monitor 50’s tonality can be a little brighter and harder and listening to something that is well recorded and focuses on a single instrument like Nils Frahm’s Hammers isn’t as natural as some rivals can achieve, although it is still very very good for a speaker at this price point. It also does a reasonable job of keeping poorer recordings under control and sounding enjoyable and while it wasn’t used for this task, it is more than up to the task of discerning the difference in presentation between the Chord Qutest and the internal decoding of the Star.

No less impressive is how well the Monitor 50 handles being used for TV and film work. Their presentation works well at delivering a wide range of material with clarity and energy and their coherence ensures that they can find detail and work it into the wider presentation extremely effectively. I suspect that four of them with the Monitor C150 Centre (or indeed five Monitor 50s) would make for a seriously capable and cost effective surround package. If you need a stereo speaker to perform both roles though, this is a fine place to start looking.

Something that also works in the Monitor 50’s favour is that it is a very easy electrical load and shouldn’t be beyond most amplifiers to drive to room filling levels. The selection of cost effective all in one systems on the market are all likely to work well with them as well lower power AV Receivers. Beyond the basic measurements, there doesn’t seem to be any sting in the tail in terms of impedance dips or the like. They then have the fundamental qualities to deliver a higher level of performance with a better amplifier if you choose to upgrade your electronics at a later date. Because the drivers of the Monitor 50 are so close together, they seem to have a naturally effective relationship with one another

If you’re shopping for a pair of speakers under £250, your choices of truly superb speakers is substantial and growing. Q Acoustics, Mission, Acoustic Energy and Tannoy all produce some superb options and more seem to be arriving all the time. That Monitor Audio has gone and built a speaker that is as enjoyable as this one for £160 though still has to be seen as an impressive achievement. This is an odd looking little speaker and it won’t be to everyone’s taste. It isn’t the absolute last word in tonal accuracy and as you might expect from a 20cm cube, the bass is tight rather than seismic but set them up correctly and listen to music you care about and you’re likely to be astonished by what they can do. There’s no shortage of high quality competition but when it comes to listening pleasure the Monitor 50 is something of a star and for that reason, it comes Highly Recommended.