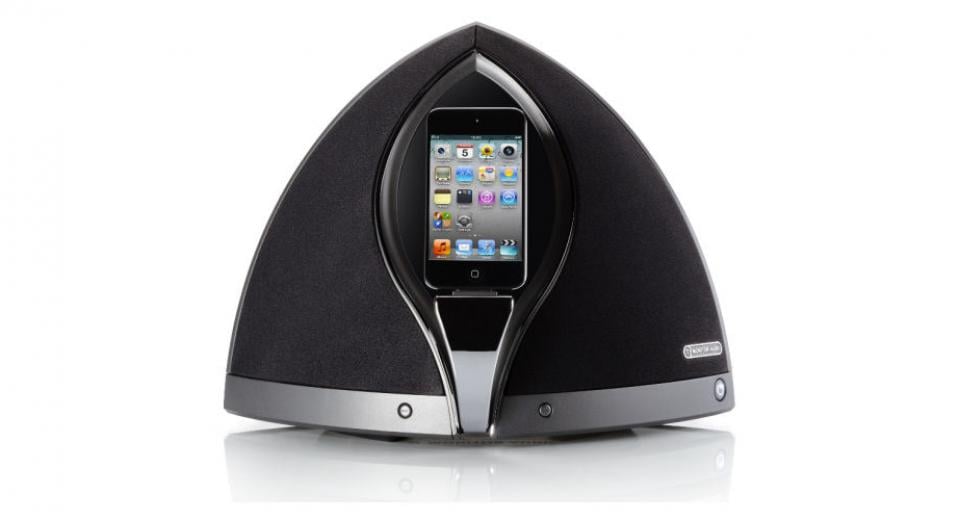 Monitor Audio are best known for their extensive range of conventional box speakers. In addition to this however, they were an early arrival in the field of iPod dock systems with the original i-deck that was a highly regarded piece of equipment. This has now been replaced by pair of i-decks, the smaller i-deck 100 seen here and the larger i-deck 200. These are slightly more conventional than their predecessor in that they are both single chassis designs with the dock mount placed between the left and right speakers.

It is often the case with hi-fi equipment that items can look different in the flesh to how they do in photographs. This is absolutely the case with the i-deck 100 which in my opinion at least looks much better in reality than it does in the pictures. In some of the common photos, the i-deck 100 can look more like a Bishop’s hat with an iPhone on the front of it but the real thing is an altogether more elegant looking affair. There is enough “brightwork” on the design to prevent it from appearing overly dark and the dimensions are more appealing than they might at first appear.

The facilities on offer are a dock compatible with the vast majority of iDevices and a 3.5mm auxiliary input. No Bluetooth or AirPlay is included. Hard buttons for standby and volume control are fitted on the chassis but the majority of controls are placed on the funky looking remote which sits nicely in the palm of your hand, although it is too easy to pick it up the wrong way around. This leaves the i-deck 100 initially looking a little sparse but the most interesting aspects of the design are internal.

The first unique aspect is that the drivers used in the i-deck are entirely bespoke and developed using the same design philosophy and C-CAM materials as the rest of the Monitor Audio range. The second is that the i-deck 100 is the only model here with room correction. Plug the deck in for the first time (and each subsequent time the power is disconnected) and the i-deck 100 will make a quick succession of digital noises to adjust the output specific to the room and location. This then feeds back to an on board DSP that takes this data into account and adjusts EQ settings dependent on the volume level selected using active bass management software.

The other positive area for the i-deck 100 is that it feels very substantial indeed. The nearly 3kg all up weight suggests that this is a more than a plastic box filled with air. The fit and finish is of a high standard and everything feels substantial. Clever features like the hinged dock mount which reduces the strain if the iPod is knocked show that Monitor Audio has put considerable thought into all of the aspects of the design. Another nice touch is that the Monitor Audio is the only dock here with a single mains lead (as opposed to a mains lead going into an external PSU). This means there is no need to accommodate any extra bits of equipment and means the Monitor Audio has a relatively small footprint. The remote worked correctly with both the conventional iPod section as well as Spotify, TuneIn radio and FLAC files played through AirAV.

With bespoke drivers and a DSP system presumably tuned to Monitor Audio’s preferences, it perhaps isn’t too much of a surprise to find that the i-deck 100 has many sonic traits that are similar to Monitor Audio speakers. This is a lively and upbeat sounding piece of equipment. If the music you are listening to has the merest hint of an up-tempo flavour, the i-deck 100 will seize it and run with it. Timing is a subjective area but the Monitor Audio has ability with rhythm that is readily apparent.

The detail retrieval is also extremely good. It is easy to pick out small nuances in materal that can vanish into the background with some of the other docks. Indivdually these little snippets might not seem very important but cumulatively they make for the difference between something sounding “right” and simply being a reproduction. The midrange and top end of the i-deck have a richness and realism that is impressive. Voices in particular are rich and very believable with excellent decay. This comes into its own if you use the Monitor Audio with apps like TuneIn radio where it can put up a good fight against the models with radio on board.

The bass response of the i-deck 100 is not quite so convincing. Part of this appears to be down to the auto setup software which did produce two slightly different performances from exactly the same setup position-possibly as a result of being distracted by some background noise. The latter had a good deal more low end than the first result but was still not the most extended performer. What bass there is has the same excellent detail as the rest of the frequency spectrum but the Monitor Audio doesn’t have the same weight as some of the designs here. This does have some advantages however. Place the Monitor Audio on a shelf or bookcase and where some of the other models here can become a little boomy, the i-deck 100 will keep much the same sonic behaviour.

For a relatively narrow single chassis design, the Monitor Audio makes a good stab of sounding like a stereo product. The sound still largely arrives at your ears from a single point but the outward angling of the tweeters manage to give a good spread of effect and bit of soundstage to performances. This isn’t perfect - like all the designs here, this is not the most suitable piece of equipment to try and get a handle on orchestral recordings - but neither does it sound like a mono box either.

The i-deck is not the most lavishly specified dock here but what it does do, it does extremely well. The bespoke technology that Monitor Audio has applied to the design has resulted in a very lively and detailed performer that can make the best of pretty much any position that it is placed in. Monitor Audio would almost certainly argue - with every justification - that if you want a little bit more low end heft, the i-deck 200 is also available. The final welcome features are the excellent build quality and pleasant appearance. If your Apple device is going to be your main source, this is a very strong performer.