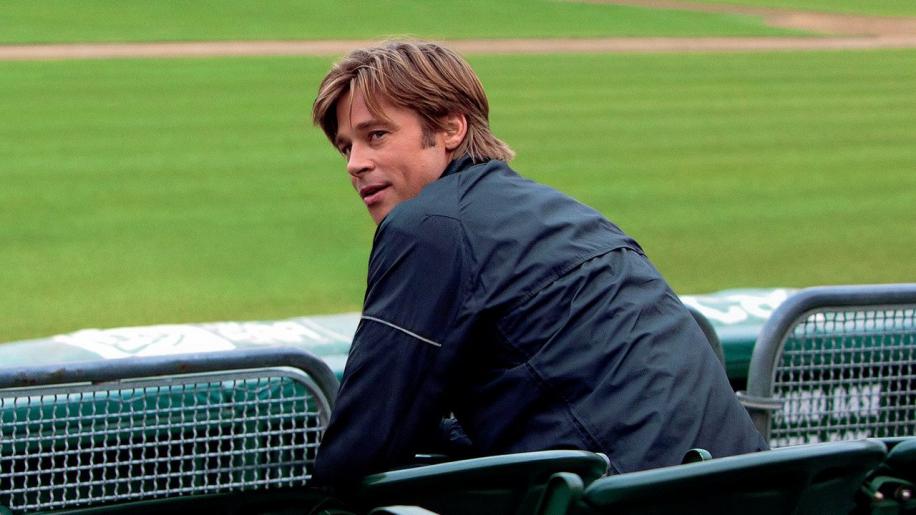 Moneyball is a movie which has no sex, violence, action, intrigue or romance. It has no clear-cut good guys, and certainly no villains, with only some inadvertent but welcome humour to round out its sports drama narrative.

Undoubtedly an appreciation for baseball will likely make this a considerably more engaging watch, not least because large portions of fairly incomprehensible in-house lingo will suddenly become clear and relevant, but even those unfamiliar with the sport will be able to get behind the underdog approach of the story, and relate to the political machinations of this drama.

The true story follows Billy Beane, a failed Major League baseball player who is now struggling with the worst team on the roster: the Oakland Athletics. Facing the loss of three of his best players, and with no budget to afford decent replacements, Beane is compelled to look for a different approach to reconfiguring a winning team and, to that end, brings on board Peter Brand, an inexperienced economics graduate who shows a keen insight into a stats-based system of baseball analysis which had been around for decades, but never employed successfully. Despite the resistance of all the stubborn old-timers who insist that their plan will fail, Beane and Brand are determined to prove that this new method of selecting and playing the players will prove a winning formula, and are willing to bet their careers on it.

Based on the 2003 non-fiction book of the same name, the production of a film adaptation of Moneyball was over half a decade in the making. Originally conceived as an alternative non-traditional sports docu-drama to be shot by atypical director Steven Soderbergh (Haywire, Out of Sight), the project was put on hold for fear of being a failure, and The Social Network writer Aaron Sorkin was brought on board to deliver a new draft of the screenplay. Director Bennett Miller – who has only ever really worked with factual documentary-style material – was commissioned to replace Soderbergh and give the film a more traditional docu-drama feel.

Where Soderbergh’s plan was apparently to make the stats-based narrative more accessibly fun for viewers (arguably in much the same way he did for Contagion), Sorkin’s approach is much more fast-and-furious, as anybody who has ever watched The West Wing would know, pounding the viewer with high-speed dialogue and making the characters feel like they are speaking a different language.

Indeed I can see why baseball fans would lap up this movie: it’s not a romantic, old-school baseball movie, about the natural talents of one individual, or the courage of a stellar team, but actually a very realistic representation of the sport, and of perhaps the biggest milestone in baseball, where things would forever change.

It’s a great tale of how the worst-of-the-worst team could develop a method for recruiting and playing the game which did not involve playing by the same rules as all the other veterans, in what was regarded as something of a corrupt game. If the game was purely run by money – which it was – then this team was never supposed to win; but the filmmakers, and the writer, portray a couple of mavericks who were prepared to think outside the box and level the playing field.

Unfortunately, what sticks with me about the movie is the fact that the story beyond that which is told in the two-hours-plus narrative is not such a satisfying one.

You see, it’s not just baseball lovers who will appreciate this movie, but actually big business too. Whilst the theme may be that of the underdog team fighting to survive in the big league, all that the tale of ‘Moneyball’ truly achieved was to make big business sit up and take notice of a more stats-based approach to baseball; and so employ that method to make money.

Stats are taking over the world. They’re a measure of how fit you are, how successful you are at your job, how famous you are, how viable a candidate you are for a job, how popular you are... pretty-much anything. Everyone needs numbers to be associated with them to prove their worth. If you’re a teacher, you need to statistically prove that you’re a good teacher; it doesn’t matter whether or not you are, so long as you look good on paper. If you’re a lawyer, it doesn’t matter how good an advocate you are when you’re fighting for a lost cause; it only matters how many wins you can rack up. Even these reviews are governed by stats, but does that really mean that my review for Jennifer’s Body is ten times as good as my review for The Last Temptation of Christ?

Hollywood is a prime and topical example of where stats have always been important, although it feels like it has truly gotten out of hand. It doesn’t matter whether or not John Carter (from Mars!) was a fluffy but enjoyable sci-fi action-adventure which was woefully mis-advertised; it only matters that it cost Disney more money than they would care to admit. It doesn’t matter that Transformers: Revenge of the Fallen was a terribly bloated movie which wasted a fortune on CG balls; it only matters that it made half a Billion at the Box Office. Even a fairly small-budget $50 Million movie which fares surprisingly well, making four times as much at the Box Office, will by optioned for a sequel, thrown a $150 Million budget, and then expected to still make four times as much otherwise it will be regarded as a failure. It’s probably the reason why remakes and re-workings are so damn popular at the moment – these are quantifiably successful commodities, easier to place bets on than original work, which is just too much of a gamble for greedy studios.

Moneyball may highlight the positive side to stats – how they changed the game; how they enabled the underdog to outperform and beat all of the experts’ expectations – but the end result is still the same. It will merely mean that big teams can now buy players for even less. The tactics used by the underdog become the tactics employed by everybody, and the biased, corrupt playing field, temporarily levelled by these new methods, suddenly becomes biased once more.

Still, this angle will only likely affect those contemplative enough to want to see the big picture, or cynical enough to find it hard to avoid it. There is no denying that, standing on its own merits, Moneyball is a well-made, atmospheric, enthralling look at the sport, bolstered by unusual characters and noteworthy performances.

Brad Pitt takes the lead in what would go on to be an Oscar-nominated role, delivering a performance that is strangely both quite original and unusual for the actor, and yet simply peppered full of what one might regard as trademark Pitt-isms. He points a lot, strangely enunciating his sentences in the way that has become associated with his form of acting, and has that warm, charming grin on frequent active duty, and yet the character he brings to life is far from the charismatic, loved-by-everybody winner that you would expect from him; his confidence, assuredness and exuberance come largely unsupported from actual results and so you get hints of a more fragile, broken man within who, as he himself says, is less bothered by the notion of winning, and more determined just not to lose again. Certainly there’s some depth to Pitt’s depiction of the Oakland-A’s beleaguered General Manager, and, alongside his against-type role in Malick’s Tree of Life, he remains an actor who has built his name on trademark behaviour, but proven his range on films like this.

Opposite him, rather unexpectedly for a meaty drama, we have reliable funny guy Jonah Hill, who is reportedly desperate to ditch the comedy image that he has accrued after an array of successful, consistently amusing outings including Superbad and Get Him to the Greek. His work in Moneyball is a certainly step in the right direction, and he is well cast as the numbers-genius behind this baseball revolution, but I’m also glad to see that he hasn’t given up his comedy routine, with the largely hilarious 21 Jump Street out now.

Supporting him we have the likes of Phillip Seymour Hoffman (The Ides of March, M:i-III), a childhood friend of the director, who is excellent as the passively belligerent play manager of the team; Robin Wright (The Girl with the Dragon Tattoo, What Just Happened) as Beane’s ex-wife; Kerris Dorset (Walk the Line, Brothers & Sisters) as Beane’s daughter, who has some of the most touching scenes playing music for her dad; Chris Pratt (The O.C., Jennifer’s Body) as one of the team’s players; with a number of real retired baseball players making up the majority of the rest of the team. There are also welcome cameos for Reed Diamond (Homicide, Dollhouse) and Arliss Howard (Rubicon, The Lost World: Jurassic Park) as fellow managers.

Although I wouldn’t personally put it anywhere near the 2011 Best Picture category, Moneyball is still a strong, engaging movie that is worth seeing, and the performances within certainly play the biggest part in this.

The director also adopts a quaintly Michael Mann-esque style when it comes to the longer scene-setting shots – which normally involve Pitt strolling around the baseball grounds listening to his pocket radio as Mychael Danna’s melancholic, self-reflective score plays out in the background – and this works well to set the mood of the piece, which is far more contemplative than your average sports movie.

That said, if you take a moment to think about it, you may find it hard to get over the fact that all the movie really showed was a game-changer which allowed underdogs to rise up for a brief spell in an effort to prove that they could stand up against the big league; by playing the game their way. Whilst this is a worthy voyage, and it does respectfully pay tribute to a man whose life’s ambition was to make his mark in baseball – and who certainly did just that – there’s no question that by now everybody’s bought into the sabermetric (look it up – before you watch the movie!) baseball approach. So for a short period of time smaller teams stood a chance of outwitting their rich opponents, but all the concept of Moneyball really did was to show us the first step in yet another ‘great scheme’ which, when fully embraced, will still – inevitably – lead to price rises for even the oddball players and thus, eventually, price the ‘little leagues’ out of the market again.

Although I can imagine lots of fatcat businessmen being amused by the ‘audacity’ of this insignificant team rewriting the way that baseball is played, there really is no major damage done to their world of baseball. It’s still returned to the equilibrium they cherish – being all about the money – and this is a fact which can’t help but put a bitter aftertaste on the movie, and leave it just that tiny bit unsatisfactory.

For avid fans of baseball, I suspect it’s difficult to overcome the sheer scale of the tide-change in question, literally rewriting Century-old rules in a game which has been worshipped inside-out for almost as long. For them, there is nothing more satisfying than seeing this perfect game further perfected.

But think about this for a moment: this film itself; the book it was based upon, and the ensuing popularity of sabermetrics, may actually be the nail in the coffin of the very underdog team that championed the idea.

Doesn’t sound quite as satisfying now, does it?! Indeed it sounds more like the very definition of a hollow victory.