Monaco: What's Yours is Mine PC Review

And shall never be returned 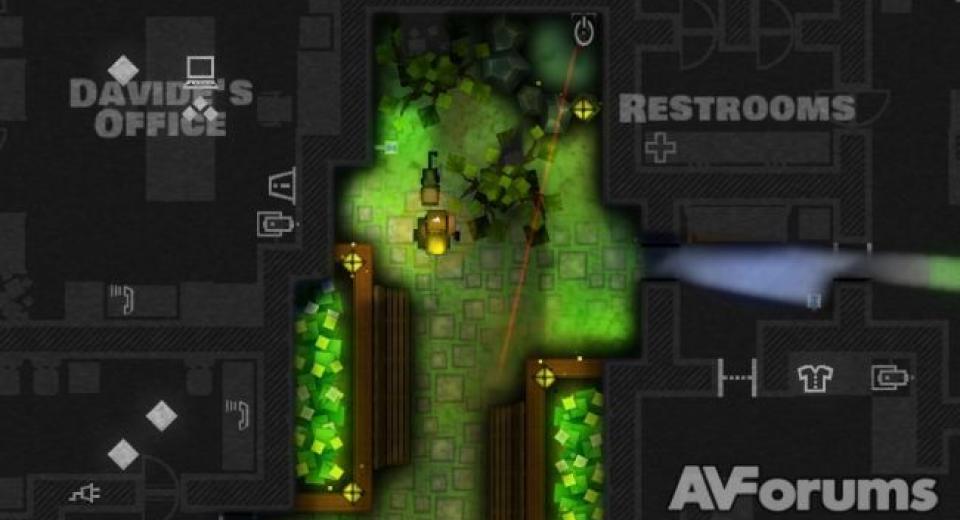 At first glance, Monaco’s neon-tinged visuals lead you to believe it’s a co-op hybrid of Thief and Pac-Man, peppered with pixel-art story vignettes that frame the action in terms of films such as Welcome to Collinwood and Ocean’s Eleven. You (and a team of up to three other people) control a single member of an international crime team, performing heists and scams on top-down grid-based levels that represent the mansions, ships, ports, industrial buildings and warehouses that make up a couple of short-ish campaigns. It’s light-hearted stuff throughout and fully self-aware, borrowing heavily from genre tropes whilst spinning a quaint little story. Monaco is by turns charming and utterly chaotic, in the best possible sense.
Whether you’re partied up with friends or playing solo, every level starts out with a safe zone strewn with a few guns or other useful items, and you’re then tasked with making your way from point A to point B to pick up an item or simply exit the level on the other side whilst collecting as many coins and opening as many vaults as you can enroute to your destination. The pursuit of those shiny golden nuggets represents the crux of Monaco’s gameplay; they form the currency that automatically reloads your weapons and items as you progress, and ‘cleaning out’ a level of its golden payload is the only way to unlock further stages later in the game. Just like Pac-Man, you’ll be skirting around the levels utilising only four directions to avoid enemies and make snap decisions on the best path to success. At first it’s all too easy, but although the control layout and early stages are deceptively simple, the difficulty level quickly ramps up, spurred on by complex level layouts filled with devious traps and obstacles that alert enemies to your presence. Quite unlike Pac-Man there’s a persistent fog of war in operation here, and you can only ever see what lies directly within your narrow field of view. Skill with MGS-style vision cones, pattern observation and stealthily creeping will only take you so far, and it’s down to the unique abilities of each individual character to counteract the fog and turn those stylishly blocky environments into a tactical goldmine.
It says a lot about the balance of Monaco’s playable roster that I’m yet to nail a favourite. Each of its protagonists is a useful specialist with their own playstyle and accompanying weaknesses and strengths; the primary of which is documented in-game, while several other bonuses remain hidden until they’re discovered through play (or the handy Steam Guide currently sat at the top of the list in the Community tab).
As examples of their skills, the Lockpick can work his way through doors in double-quick time, while the Mole is able to circumvent them entirely by burrowing through walls and other solid objects (slowly and noisily). The Lookout is able to identify every enemy on the map as long as he stays hidden or moves slowly, the Cleaner is able to put guards to sleep when sneaking up from behind, the Gentleman is able to walk past those same individuals when in disguise, whilst the Redhead can bend them to her will and ask them to open doors or disable systems. The Hacker is able to inject a virus into security systems to disable automated defences, and the Pickpocket has a trained monkey that can collect those pesky coins whilst he stays at a distance.
When combined against the static and mobile defences that lie between you and your objective, every single one of those abilities is useful and bolstered by the others. As an example, just last night I experienced a game in which the Lookout decided to kite five enemies to a corner of the map and then proceeded to stay static and hidden (thus revealing their location to everybody else). Whilst that was happening the Mole was drilling through a wall to get to a safe guarded by laser security and two more guards, and the Hacker was disabling the electronics connected to the room. With defences down, the Lockpick entered from a different side and dispatched both guards as the mole grabbed the goods, and an impromptu escape plan was hatched through the walls of two nearby offices. It was a perfectly executed plan that came together with an absolute minimum of contact via text chat, and it was all amazingly good-natured considering this was a group of strangers. For whatever reason, everybody playing Monaco at the moment is just so darned nice (on the PC at least); it’s almost disconcerting.
Of course, that was only one level, and the others that we played were a mixture of sheer ineptitude and absolute comedy, with players getting stuck in the most ridiculous positions and the occasional game over screen necessitating a restart. Anybody that loses all their health can be revived by another player, and that leads to some tense moments when you have three downed comrades stuck in the corner of a heavily-guarded room, and absolute chaos as each of them is revived whilst guards close in and attempt to put them back on the floor. It can be a little fiddly to lock onto a specific target when there are so many in close proximity, but that’s about the only complaint that I can level at Monaco’s gameplay mechanics.

Monaco: What's Yours is Mine PC Review

Whilst Monaco is perfectly playable in singleplayer mode (any one of the characters can make it to the exit with the use of just their own skillset), you should be aware that it pales in comparison to its riotous multiplayer. Sure, the chaos is more manageable in singleplayer, and each of its levels becomes a satisfying test of individual planning and skill, but like all good multiplayer games, Monaco is at its best when generating the type of anecdotes that can only stem from multiple idiots inhabiting the same gamespace.

If you can get together a like-minded group of friends to plan the perfect heist, this is a game that'll last you long into the night as your group merrily bungles its way through challenge after challenge. And heck, even if it's just a quick session with strangers, Monaco is still an absolute blast when you're matched up with the types of friendly folk that made their way into my sessions time and time again during the review process. At less than a tenner, it's a steal.