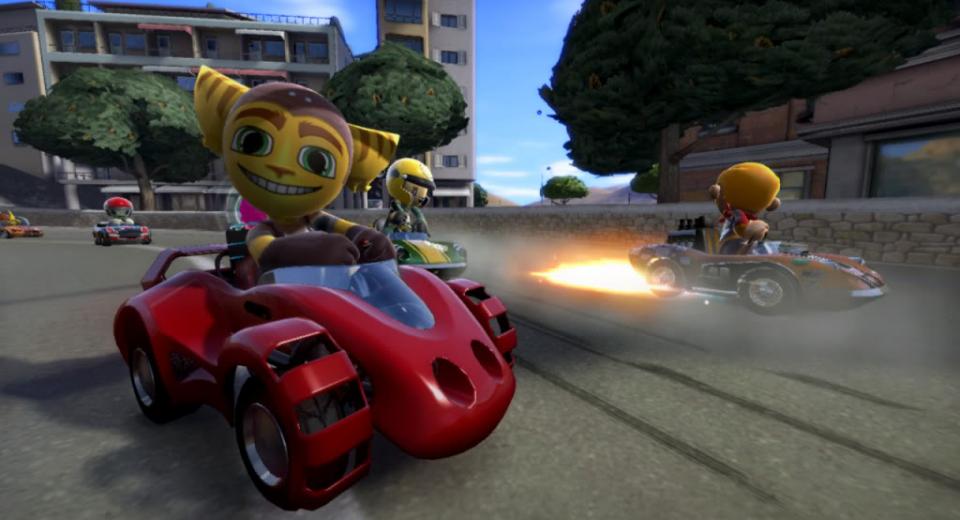 A day rarely goes by when the question, “What two games would you like to combine” isn't asked. It's even rarer when a dev comes along and actually successfully pull such a combination off. But here is the lovechild of several hits - part Mario kart, a handful of LittleBigPlanet and a splash of Crash Team Racing, sounds good doesn't it?

The market for kart racers has been fairly barren over the years, with many putting high hopes in Sega's latest effort to quench their thirsts. Not that Sonic & Sega All-Stars Racing isn't a bad title, it just reflects the current tough patch they're going through and Sonic's struggle to remain popular. Queue United Front Games to step in and attempt to take the kart racing crown.

The premise for them is quite a large one seeing as though they are relatively new and small scale, but with few kart racers out there, this makes the task somewhat easier. A perfect place to start a shiny new track record then. The game has been on the horizon for quite some time so publicity isn't short, which will surely only get bigger when the game is absorbed by millions. Given its production time, it is hoped the game should deliver on many of its previous promises. Not much pressure then. The potential for the game is huge and could be a massive success if it gets all its key elements right. And if you're anything like me, then you'll be dying of anticipation, wanting to know whether it delivers or not.

What is immediately clear is that ModNation Racers has no specific audience, which is not easy to pull off without being too patronising or sophisticated. The graphics are simple yet detailed, while the tracks are not too taxing but still full of life. Adding to its broad appeal, is the fact that cheerful music is played throughout the races and load screens, whilst the overall tone of game is very jovial. Sticking with its appeal, catchy jingles and adverts are played between races which advertise new vehicles and items, giving a life-like world feel.

Noises from the game are clear and sharp, with each engine having a unique sound, whilst the tyres give feedback depending on what surface they are travelling along. Weapon noises translate well and as expected, rockets go with a satisfying 'bang'. Small things admittedly, but they add up to make an overall enjoyable experience.

Following in the footsteps of predecessor Crash Team Racing, there is no main menu. Instead, you drive around an 'arena' in which to go race alone or online, shop, or muck around customising more or less anything you like. Which, well, works. No boring menus to trawl through here, making it a fully interactive affair.

After a brief 'tongue in cheek' history lesson in kart racing, you're thrown in at the deep end like most racers. First of all you must qualify, with your meagre low budget car, for the ModNation Racing Championship, or MRC for short. After your inevitable success, you begin building up new parts for your ride, your 'mod' and new scenery for any attempts you make to create 'the perfect track.'

Soon, you've hit the big time, which calls for a new manager and garage, and most importantly, a new car. Many racers have shoehorned stories forced into an already completed product. Here though, the story goes hand-in-hand with your races and you can see real progression through the career by the amount of collectibles you acquire, and new features that will become available.

As you'd expect, there are few buttons to master. It is literally a 'pick up and play' sort of game. The steering can feel a little heavy at times but this is only a kart racer, not a driving sim, and with so much else on offer here it's hard to see how this will affect the overall experience a great deal. However, this will not be the biggest demon you encounter, you have the AI to thank for that. Although they are neither too easy to take down or too tactful, they can give you one heck of a pasting now and again. It feels somewhat cheating leading the pack, then being peppered by numerous rockets and bolts and finding yourself back in 7th. On the other hand, revenge is sweet when you build up a rocket strike and use it just before the finish line and pip them to the finishing post. Scoring hits also fills the boost bar, which is triggered with L1, whilst drifting and catching air time will add to it even more.

An arcade kart racer wouldn't be the same without power-ups and ModNation Racers adds to this staple, collecting them by driving through pods which are dotted around the track. Each weapon has a special function after three pods have been collected consecutively. Sounds easy doesn't it? Don't be surprised if you're caught one short when hit by a rocket barrage, with the outcome being you losing what you have collected. The turbo power-up has a nifty 'time warp' special function, firing you out at the front of the pack, which is usually followed by a poor rendition of 'the time warp dance' song.

Finishing first isn't a necessity though, unless you're determined to complete every challenge from each race. A top three finish is enough to see you qualify for your next race, which is generously forgiving seeing as though you'll spend a lot of time playing catch up.

A strong customisation mode should keep all those with ADHD calm for a considerable time. So don't be surprised if you spend more time customising rather than racing, not to say either isn't fun though. Stickers can be painstakingly accurately placed, whilst tracks can be beautifully crafted and populated. Creating that perfect LittleBigPlanet level can alienate those with little patience or the necessary imagination - here though, building a track is a doddle. Laying it is as simple as driving round an open space, altering the elevation to create hills and slopes. All of which is helped with a nifty auto-populate function which saves precious time and gives a barren road a new lease of life with scenery and obstacles.

The fact that there is an extensive career mode to trawl through, speed demons should be pacified, but there will always be something that's missed. Tokens are up for collection whilst you thunder round each course, which, of course, are not easy to find all the time. These are then spent on vending machine style lucky dip machines, which spit out items for your own perverse customisation, and in true LittleBigPlanet style, this will have you fiddling around with every last detail possible yet again.

Adding the fact that most of the good stuff is yet to come via community created content, it should be quite a party well worth being part of. No doubt, there will also be the inevitable stream of downloadable content just around the corner so it would be foolish not to wait for more it to arrive.
Firmly sticking with Sony's, “Play, Create, Share” ethos, this game has a massive community feel. Posting content is a straight forward process, whilst viewing and downloading others' work is not taxing or boring. There's nothing better than being able to invite friends into a race at the press of a button, and makes the game feel as though it has been made with online interaction as a key focus for attention.

Although there's nothing actually wrong with the game, it wouldn't seem justifiable for ModNation Racers to be recommended as a competitor against other games out there at present. However it does make a perfect escape from killing innocent Russians or listening to dodgy accents in Panau. It must be taken into consideration that this is the best example of a kart racer out on the Playstation 3 at present and is one for the whole family, therefore making this a package well worth picking up, recommended for those who wish LittleBigPlanet had more vehicular options.

ModNation offers its own twist on the kart racing genre with track building facilities, extensive character customisation and a huge collection of user generated content to try out via the PlayStation Network. But whilst the game doesn't actually do anything wrong, there is little here that will keep your interests perked while there are other bigger titles available at the same time. If there is one casual racing title that you have to own though then this should be it.