"If you wear a dress and have an animal sidekick, you're a princess." 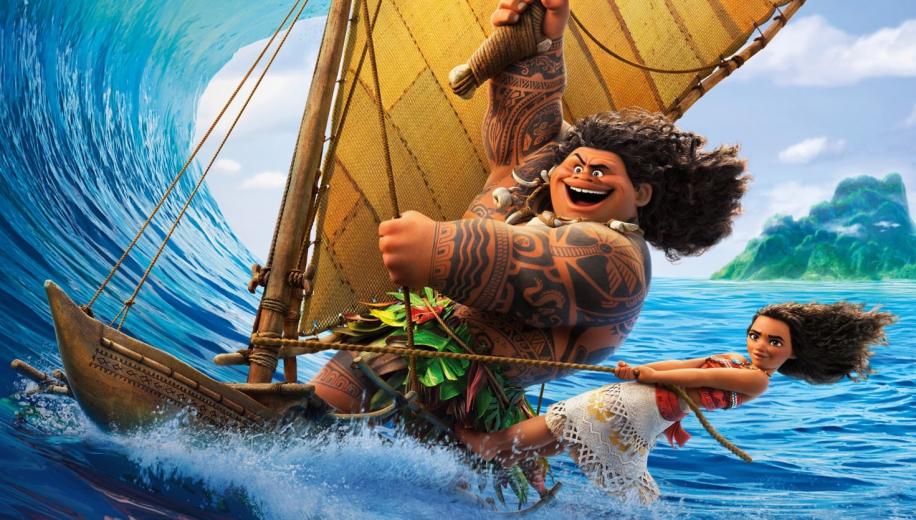 Taking a hard anti-princess line, Moana imbues Polynesian mythology with animated vitality, delivering a strong contender for one of Disney's all-time best. With measured balance between songs and spectacle, comedy and conflict, Moana excels in all departments, remaining a visually opulent wonder wrapped around a strong story and witty script, with a lovingly crafted heart and soul at its centre.

One of Disney's all-time best

Visually, Moana is astounding, the bright blue sky and deep blue ocean providing a stunning backdrop to the colourful events, but the real surprise comes in the character designs, which are so well-realised that it's hard to actually believe that they are not rendered in physically real life. And with a rousing score - peppered with just enough song tracks to win the hearts of the musical crowd, but nowhere near enough to put off the anti-musical crowd - this production hits all the right notes.

With Dwayne Johnson offering arguably a career-high performance (and not just in terms of his surprisingly good singing!) as demi-god Maui, it's newcomer Auli'i Cravalho who steals the show as the title character, although they both have great unlikely-partner chemistry, setting off on a journey that nods to everything from Mad Max: Fury Road (by way of Waterworld) to Lethal Weapon, and will win the hearts of audiences young and old. Tremendous.

Moana comes to UK 4K Blu-ray courtesy of Disney, a painful two years after its US 4K bow. The Ultra HD Blu-ray release is another tremendous effort from Disney, even if the intervening two years have not been forgiving, giving the 4K HDR release firm competition from Disney+'s Dolby Vision version.

The intervening two years have not been forgiving, giving the 4K HDR release firm competition from Disney+'s Dolby Vision version

Moana is one of the most beautiful Disney productions, Pixar or Disney proper, with some absolutely stunning shots that capture sunsets, hair and even skin in a way that - even if but for a second - leaves you wondering whether you're looking at something live action. There are several 'wake up on the beach' moments where you could easily be looking at real footage. Sure, it still enjoys the playful decadence of a fun Disney adventure, but it revels in the jaw-dropping island landscapes, the vast blue oceans and iridescent deep sea vibrance.

HDR and WCG of course make a huge difference in this respect, clearly upping the ante over the SDR Blu-ray release (itself a winner), and giving greater depth and luminance to the wide variety of tones, richer now than ever before, with some colours that truly pop, particularly for the Tamatoa sequence. Ultimately, whilst you would think that Dolby Vision might have the edge, in a direct comparison it looks like the higher bitrate disc still handles the content very impressively. Sure, the 4K DV stream is no slouch, but the 4K HDR disc appears more considered and refined, leaving a crisper, sharper image, even for an animation, bringing out further detail, even with a 'mere' 2K upscale, and pushing the two presentations farther apart. Whether it's the rendering of Tafiti's moss-like 'skin', the sand in Moana's hair, or the tiny rippled bubbles and texturing of the surf (which almost dissipates into a think layer of pixel-grain on the streamed version), the disc ultimately holds the edge. For many, Disney+'s DV version will more than suffice, and it is a glorious rendition, but those who regard this as one of their all-time favourite Disney entries should consider this physical media release to ultimately be superior.

Dialogue is delivered with clarity and precision, gifted prioritisation across the duration, not least when the songs take over, whilst effects enjoy the bustle of island life, the calm and storm of the ocean, the Waterworld/Mad Max-esque battles, the snap of Maui's powers and the crazy lava-monster mayhem of the final act. There's some keen directionality here, gifting the movie a more immersive feel which better draws you into the roaring romp.

Of course it's the LFE - or perhaps ULFE - which always seems to suffer on these Disney releases, and Moana, particularly since it's essentially identical to the US release from a few years' back, is no exception to this Disney curse. Perhaps it's a little like their Dolby Vision implementation on Disney+, namely, generic Atmos application, which is always going to be crafted within pre-determined limitations that set boundaries on just how much LFE oomph you're going to get. It doesn't mean it is not there, and turning the volume up does bring you back into the game, but the track's never likely to be regarded as being the kind of reference offering that the Blu-ray afforded back in the day.

Disney's 4K release of Moana offers all the old Blu-ray extras, but doesn't port anything over to the 4K disc itself, leaving you to flip to the accompanying Blu-ray (which you likely already own) included in this package.

There's an Audio Commentary, a few short Featurettes, a great Disney Short, a further Maui Short Film, some Deleted Sequences, a Deleted Song, some Music Videos and a look at the Easter Eggs.

Moana ﻿is arguably one of the greatest Disney movies of all time, besting their uber-popular Frozen franchise and affording a modern, relevant incarnation of their more traditional but outdated princesses.

Arguably one of the greatest Disney movies of all time

Disney's UK 4K Ultra HD Blu-ray release of Moana is a couple of years too late - after its 2019 US 4K release - and doesn't do anything to correct the suitably Disnified Atmos track that was on that release, but it does best the streamed 4K Dolby Vision version of the feature that has since appeared on Disney Plus, ultimately leaving this physical media the definitive way to own this modern classic. Recommended.