"The Syndicate is real: a rogue nation trained to do what we do." 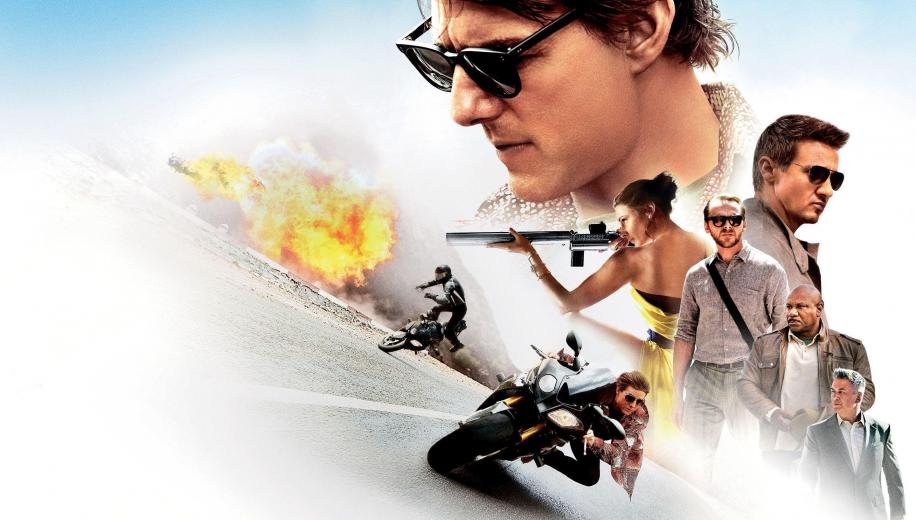 Although Fallout will mark the first time that a director has returned to do a second film in the franchise, it's not the first time they tried to make it happen, with both the third and fourth instalments originally set to be directed by J.J. Abrams. The continuation here, though, is not just in terms of director and likely style, but also narrative. And it's great news, because, after Rogue Nation, everybody wanted more.

Right from the classic tune over the production credits to that jaw-dropping, aerial pre-credits sequence to the magical signature credits themselves we got the instant feeling that this entry, perhaps more so than any other before it, was intent upon paying tribute to not only the best moments of the previous instalments but also of the classic TV series, with the best credits sequence in the series thus far, and the toughest opponents too (although Mission: Impossible III's Phillip Seymour Hoffman was the best villain, here The Syndicate are a much bigger and more pervasive outfit).

Fans will already know that The Syndicate is taken straight from the TV series, and that they are the Mission: Impossible equivalent to Bond’s SPECTRE (only, as it turns out, infinitely more threatening than the latter), and the film establishes the franchise’s strongest opposing force, complete with hordes of disposable gun-wielding assassins (most spectacularly on a fleet of motorcycles) and a viciously ruthless villain at the head of the table. It also establishes the franchise’s strongest female presence in Rebecca Ferguson’s kick-ass, mysterious, and undeniably gorgeous double – or maybe even triple – agent.


Undoubtedly the best fifth entry in any franchise.

McQuarrie handles both writing and directing duties, with a production team that once again delivers an assured, frequently breathlessly kinetic entry which bounds from set-piece to set-piece with fluid motion and blockbuster spectacle, whilst paying keen tribute to previous entries, familiar faces and series (film and TV) trademarks.

And with Cruise, already 53 at the time, delivering a whole array of jaw-dropping stunts that require him to drive, hold his breath and just hold on for dear life – in some of the most truly insane scenarios that you’ve ever seen – it’s easy to forget that this is the fifth time out for this crew, and that this is undoubtedly the best (Fast Five coming close) fifth entry in any franchise.

Rogue Nation doesn’t strike every single note perfectly – perhaps not quite delivering its more low key third act with the same effortless vitality as its first two – but it remains a great franchise entry, a great Summer Blockbuster and indeed one of the best Blockbusters of 2015.

The 2015 fifth film was shot on 35 mm film which reportedly yielded results between the standard 3.4K and the peak 6.5K, but is reportedly capped not only by VFX finished at 2K, but also a 2K Digital Intermediate, which has been used here for this Ultra HD Blu-ray release.


Another great presentation in this impressive box set.

Detail may only enjoy a modest uptick over its preceding, already reference 1080p Blu-ray, but the improved nuances are still there to notice, from blades of grass to wisps of smoke; beads of sweat to strands of hair. There's an heighten sense of clarity and sharp precision, despite what the technical limitations should otherwise inform you.

It's, of course, the HDR, WCG and Dolby Vision that do the heavy lifting this time around, bringing a rich depth across the board to the full spectrum array of colours on offer. Everything from the healthy, often tanned skin tones to the gorgeous, often sun-baked settings; the streaks of vibrant colours on the clothing, the glow of tech - even underwater - and the lush green of grass and foliage; it all looks brighter, bolder and more striking. Rich and deep black levels, afforded superior shadow detail, round out the excellent presentation, which is another great presentation in this impressive box set.

Whilst the first three movies enjoy a noticeable upgrade from their previous lossy Blu-ray audio tracks to lossless audio tracks this time around, and the fourth already had a strong, demo lossless accompaniment, fans will still be understandably disappointed that none of them were afforded a full Dolby Atmos track.

Right from the over-the-production credits score music cues, through to the blistering action sequences and globe-trotting hijinks this track impresses. With dialogue remaining clearly defined across the frontal array, rising above the maelstrom, the effects coverage is at times breathtaking, strapping you to the side of a plane during takeoff, or submerging you underwater with nothing but the muffled sound of air bubbles and the increasingly rapid pound of a heartbeat to engulf you.

Surround action is at times astounding - listen to the arc of camera clicks as we pan around the Vienna opera house - and the key setpieces drive this point home, with more than enough LFE presence to make the hairs on your arm stand up. From whiplash-inducing car chases to breakneck speed motorcycle pursuit; all the while with that tremendous signature score, once again reinvented for another chapter, providing backup for the rest of the track, this is undoubtedly a highlight of the box set.

Again Paramount only really let us down in the extras department, with the US standalone 4K release of Rogue Nation boasting not only the old extras - which were originally split over two discs - but also a second disc packed with old and even new features.


A decent selection but it's frustrating not to have the complete package.

Here, as is the trend with this UK box set, we miss out on the second disc, with nothing but the Audio Commentary on the 4K disc itself, and then only the first Blu-ray disc which contains the first half of the extra features, including some 7 Featurettes. It's a decent selection, but it's extremely frustrating as with the third and fourth films in this collection) not to have the complete package here. On the eve of Fallout, there's no better time to catch up on the preceding 5 Mission: Impossible films, released in 4K in a stunning box set that - notwithstanding some deficiencies in the extras department - is otherwise pretty excellent.


There's no better time to catch up on the Mission: Impossible films.

The set has seen staggering new 4K remasters for the first film and the second film, and both those and the third film enjoy a lossless audio track upgrade. The fourth film stands out with its native 4K presentation, whilst this release of Rogue Nation carries the only Atmos track in the set.

Given that it looks like Fallout continues straight from the events of Rogue Nation (which, themselves, were informed by the events at the end of Ghost Protocol which, in turn, followed on from the events of Mission: Impossible - III, arguably), there's no better time to watch them all again.