"This is not mission difficult, Mr. Hunt, it's mission impossible. Difficult should be a walk in the park for you." 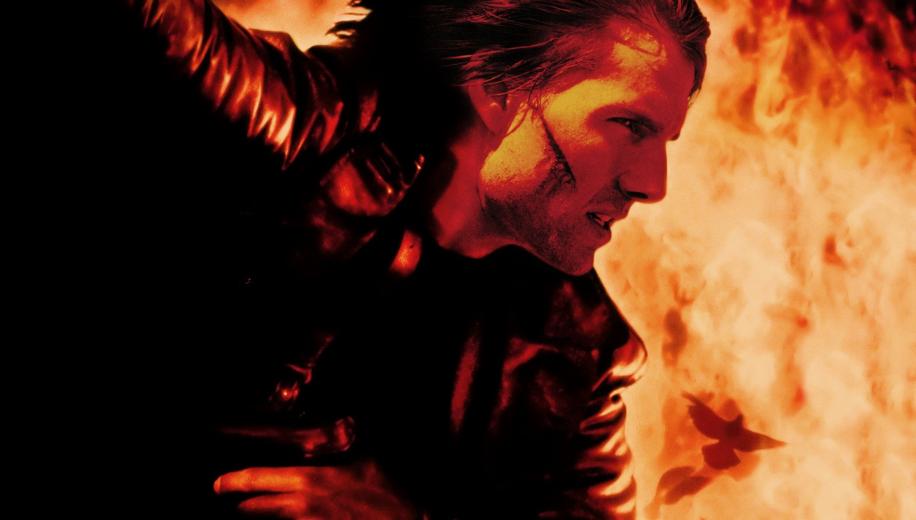 Continuing our look back at the Mission: Impossible films in anticipation of the upcoming Fallout, next up is John Woo's ballistic slo-mo-tastic action sequel.

What a difference a director can make. Before it became Tom Cruise's Mission: Impossible series full and proper (one of the primary reasons later directors like David Fincher and Joe Carnahan would abandon the franchise), a sequel to De Palma's more classical Hitchcock-inspired spy thriller original was commissioned under the helm of Director John Woo.

Returning screenwriter Robert Towne (the Chinatown scribe who not only rewrote the first film's script, but also helped write a number of Cruise's other hits, including Days of Thunder and The Firm) would once again draw inspiration from Hitchcock - this time Notorious - which played to Woo's romanticised affinity with the legendary director. The end result, however, is basically a PG-13 John Woo film - replete with ineffective romantic plotting - that rides high on its pure adrenaline quota and a magnificently over-the-top score by Hans Zimmer.

Cruise changes gears admirably, committing to arguably the most action-driven movie in his entire career, which sees the film open with its grandest stunt - spectacular free-climbing in the Moab desert - and requires that he adopt not one but two guns (having barely touched a weapon in the first film), diving around in slo-mo, and riding a motorcycle through explosions whilst shooting backwards. It's glorious insanity.

He still maintains the core of the film - and franchise - even whilst co-star Thandie Newton is called upon to say some cringeworthy dialogue, dubious team choices make their fleeting guest appearances, and Dougray Scott proves a disappointingly realised villain (who, on paper, should have been the perfect arch villain, basically Cruise's Hunt gone bad). At least the Hopkins cameo provides the heavyweight with the best lines in the flick, including the above "This isn't mission: difficult, Mr. Hunt..." line which, followed by his wry smile, is absolute classic Hopkins.

Better enjoyed as a PG-13 John Woo movie that sits comfortably alongside lesser - but still thoroughly enjoyable - Woo movies like Broken Arrow, below the likes of Face/Off and far below his Hong Kong masterpieces like Hard Boiled, Mission: Impossible - II certainly shows what a difference a director can make, remaining a ballistic, bombastic diversion in the consistently colourful and entertaining franchise.

The 2000 second film was shot on 35 mm film with VFX finished at 2K, although the film has been rescanned and mastered in 4K, which has been used here for this Ultra HD Blu-ray release.


It's a fantastic upgrade, the best the film has ever looked, and one of the best of the excellent 4K renditions of the Mission: Impossible films.

If the first Mission: Impossible film in 4K was a noteworthy improvement over the original Blu-ray release, Mission: Impossible II somehow manages to make for an even more striking upgrade on 4K Ultra HD Blu-ray, also blowing the old 1080p Blu-ray disc out of the water, with Woo's bright, explosion-packed style lending itself particularly well to the benefits of HDR, WCG and Dolby Vision.

Detail renders the close-up shots (predominantly of Cruise's face) with pin-prick pore precision, with the characters looking better than ever, the background environments (like the crashing waves) even more spectacular, and the clothing and vehicles impressively nuanced.

Sure, as with the first film, there are a few softer shots, bending to the limitations of the source cinematography, but wow is it spectacular for the most part, and the step up over previous releases is so significant than all the minor flaws can certainly be forgiven. Grain remains stable - arguably even more so than the first film - and all of these delightful highlights come even before we look at HDR, WCG and Dolby Vision.

As you would perhaps only expect from a Woo Hollywood production, this is a really vibrant film, and the colour enhancements here only make it even more eye-burningly spectacular, bringing added depth to almost every single tone, and making the palette positively pop.

There are simply too many standout moment to note, from the stunning blue sky in the background once Cruise reaches the top of his climb to the green hues of the lab work; from the striking desert sunsets to the fireball explosions that blossom out spectacularly. It's a fantastic upgrade, easily the best the film has ever looked, and arguably one of the best of the almost universally excellent 4K renditions of the Mission: Impossible films.

As with the first film's 4K release some will find that Mission: Impossible II's 4K Ultra HD Blu-ray debut is something of a disappointment as Paramount didn't take this opportunity to properly upgrade the audio to the immersive HD audio variety, a la DTS: X or Dolby Atmos.

Once you get past that fact, however, you soon realise that the upgrade that has been provided - from the original Blu-ray release's lossy audio to this Dolby TrueHD 5.1 lossless track is absolutely stunning. Besting even the already impressive upgrade for the first film, which made the same leap, Woo's ballistic mayhem will blow you away this time out, with staggeringly energetic action sequences fuelled by a fabulously over the top score from Hans Zimmer.

Dialogue remains firmly prioritised throughout the piece, afforded clarity and coherence throughout, but it's not the dialogue that really matters this time out - at least on the aural front - as, when the action sequences kick in, they bring with them some serious fury. Bullets whiz across the soundstage, and thus your living room, carrying significant LFE weight, whilst explosions detonate under your sofa. It's fast, frenetic and fantastic.

The thrumming rock-tactic score from Zimmer goes fully metal fury, making the already over-the-top action even more fist-pumpingly enjoyable, and even allowing the quieter scenes to soar as Lisa Gerrard's unmistakeable mellifluous vocals elevate the otherwise somewhat hackneyed emotional moments, attempting to give the lesser work the kind of weight everything from Gladiator to Man on Fire (and countless others) benefitted from through the Zimmer/Gerrard pairing.

It's all stunningly relayed here, besting the already outstanding lossless upgrade on the first movie and hitting reference standards; certainly this is the best the movie has ever looked or sounded before.

Paramount haven't gone the extra mile in the extras department for this 4K Mission: Impossible set, missing the opportunity to capitalise on the release of the upcoming Fallout by featuring a few archival supplements - in HD no less - and not even bothering to port over the material onto the Ultra HD Blu-ray disc itself (beyond the Commentary), instead providing fans with a disc they likely already have - the same Blu-ray disc from over a decade ago.


The extras weren't all that spectacular in the first place.

The extras weren't exactly all that spectacular in the first place, with Woo's Commentary somewhat hard work (his enthusiasm is commendable, matched only by his somewhat delusional view of the film's narrative worth; the man is ironically a clear romantic, ironic because his forte is not romance) and the additional SD Featurettes fairly lightweight, a quarter-hour Behind the Scenes overview headlining the shorter and shorter pieces and rounded out by a couple of Featurettes (Generation: Cruise and Excellence in Film) that are already present on the Blu-ray for the previous instalment.

Besting the outstanding upgrade on the first movie this is the best the movie has ever looked or sounded before.

The 2000 sequel Mission: Impossible II comes to the UK as part of a 5-film franchise box set released by Paramount just in time for the upcoming Mission: Impossible - Fallout. Following suit after the the tremendous 4K release of Mission: Impossible, the second earns a similarly stunning new full fat native 4K Dolby Vision-enhanced video presentation and reference quality lossless audio track, which both make for a tremendous upgrade over the existing Blu-ray and, throwing in the existing extras, leave this the definitive release of the film. Highly recommended, it's a must-have disc and package.