"The four of us are all that remains of the IMF." 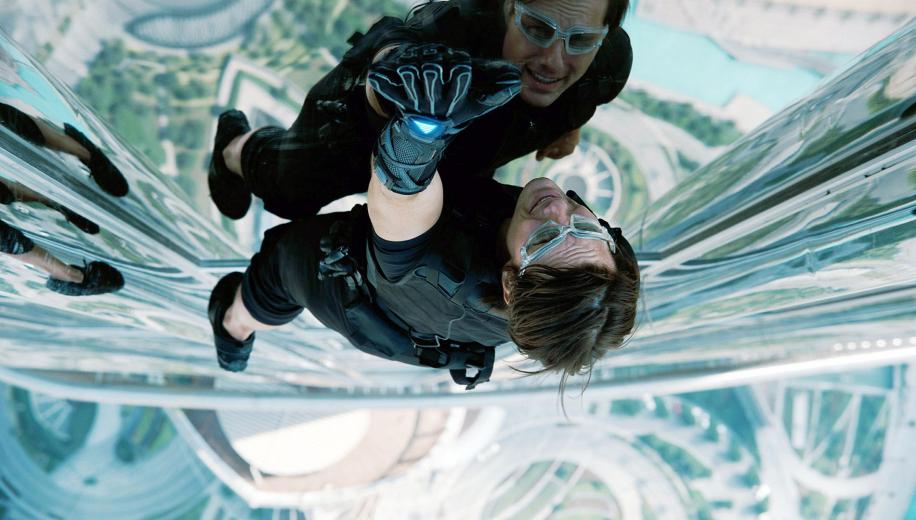 Almost directed by J.J. Abrams as a sequel to his third entry, Brad Bird's Ghost Protocol remains a larger-than-life blockbuster which rejuvenated the then-flagging franchise.

Originally, Ghost Protocol was designed to break protocol and have J.J. Abrams return and direct a direct sequel to his third film, but commitments towards jump-starting other - at the time - bigger franchises saw him only produce the fourth entry, which would be helmed by The Incredibles' Brad Bird, making his live-action debut.

With child-like wide-eyed fervour, Bird gleefully puts his own spin on the series, flavouring it much like each of the directors before him, and blending - much as he did in The Iron Giant and The Incredibles - serious themes and tense drama with comic sensibilities and blockbuster spectacle.

Tonally, Ghost Protocol is arguably the most whimsical of the whole lot, with random characters like the dumbstruck Russian cell-mate, and Anil Kapoor's slimy - and strangely feline - tycoon almost pushing this into farce. However Cruise, as ever, remains the backbone of the franchise, taking the mission seriously no matter how ridiculous Simon Pegg may behave, and affording his comedy counterparts a serious foil which mostly works.

Ever the trooper, it's Ghost Protocol that arguably cemented the franchise's - and the star's - name with regards to grand stunts, something which the early Bond films used to be celebrated for, but which Tom Cruise's Mission: Impossible is now synonymous with.

Sure, the first three films had their fair share of memorable moments, but Cruise's IMAX-tastic climb of the Burj is something of legend, reminding franchise fans that the star - who had just turned 50 - wasn't going to cede the throne anytime soon, with potential replacement Jeremy Renner paling in comparison.

This fourth film also continued the theme of recurring cast members (Simon Pegg, Ving Rhames) forming something of a team and a Mission: Impossible 'family', with Renner joining the fold here, and Paula Patton adding some leggy kick-assery to the mix, even if it would be her only entry. It's final nod to a core theme in the third film was also a nice tie-in, directly linking the events in the third, fourth, fifth and - soon - sixth films in a way which worked so wonderfully for the Fast and Furious franchise in terms of pure fan service, and which will hopefully pay dividends with Fallout.

Although lacking in a strong villain - on paper the deadly antagonist, whose prowess with face-masks makes him the perfect anti-hero for Cruise's Hunt, should be one of the best so far, but casting the late Michael Nyqvist was a fatal error because he just wasn't very believable - Ghost Protocol remains fabulous summer Blockbuster entertainment and the first of two - and hopefully three - entries which would surprise audiences to best their Bond counterparts.

The 2011 fourth film was shot on both 35 mm film and IMAX, with VFX therefore finished at both 2K and 4K, respectively, and the film has been afforded a 4K Digital Intermediate, which has been used here for this Ultra HD Blu-ray release.


Not just the highlight of this Mission: Impossible set, but one of the best looking discs released this year.

Whilst the first three films have all had questionable Blu-ray predecessors upon which to found a noticeable improvement, Ghost Protocol already looked utterly spectacular on 1080p Blu-ray. It was an easy demo/reference disc, particularly with all those stunning IMAX-derived shots.

The Ghost Protocol 4K release has a hard task besting that, but does so with flying colours, and makes for utter demo and reference material on the still niche format, with staggering detail and fabulous colours. The film, which you likely thought could never look any better, looks better than ever before.

Detail laps up the weathered prison setting for the opening sequence, Cruise's ageing but still phenomenal physique, strands of hair and fine precision details on facial close-ups. The high-tech railway car, the underwater escape, and the entire Dubai sequence - not least the scaling of the Burj which is amidst one of the most spectacular-looking scenes ever to grace the format - it's all fantastic material which the 4K rendition delivers with skill.

WCG, HDR and Dolby Vision work wonders with the colours, bringing forth glowing signs, spotlights, explosions, the gorgeous reflections in the Burj, the glowing orange of the sandstorm, and the mechanical cold blue-grey of the car factory finale. Colours across the board enjoy a richer rendering, with vibrancy and depth hitherto unseen, whilst blacks are better than ever, promoting supreme shadow detail in the inky depths.

It's 4K perfection, almost impossible to fault, and not just the highlight of this Mission: Impossible set, but one of the best looking discs released this year.

Although, unlike the 4K releases of the first 3 films, Ghost Protocol doesn't enjoy an upgrade for this release, that's because it never had the same disappointing lossy Blu-ray track as the others, instead released on Blu-ray five years ago with a stunning Dolby TrueHD 7.1 track which is exactly the same one that is ported over to the Ghost Protocol 4K Ultra HD Blu-ray release here. It was demo and reference back in 2012, and it still is now.

Dialogue comes across clearly and coherently throughout, largely dominating the centre channels with some expansion over to the fronts where for directionality. The score is one of the best of the entire series, blending just enough classic thematic elements in with the modern beats, and providing a rousing accompaniment that gives the channels plenty to play with almost throughout the movie.

Effects are superbly observed, from the smaller tech-derived bleeps which are finely picked up, to the heady ambience in some of the more atmospheric locales, to the louder moments – which include oppressive sandstorms, thunderous explosions and penetrating gunfire. With a thumping bass underscore to the whole piece this is a thoroughly immersive offering that excels from start to finish.

Mission: Impossible - Ghost Protocol's 4K Blu-ray release hits its first stumbling block in the extras department, continuing the disappointing trend from the original Blu-ray release (where the full selection of extras were only available from BestBuy) and doing the same thing here.

We get nothing on the Ghost Protocol 4K disc itself and the release only affords us the single first Blu-ray disc in the original release, with none of the second disc's supplementals (about ten missing Featurettes and Deleted Scenes). Disappointing.

Ghost Protocol not only reinvigorated Cruise's somewhat flagging franchise - and, arguably, career - but it also did the unthinkable: finally unseating the Bond franchise in terms of globe-trotting spy-action-adventure-thrills and pure summer blockbuster escapism. It's a great entry in one of the most consistent - and yet diverse - film series' of all time.


A great entry in one of the most consistent - and yet diverse - film series' of all time.