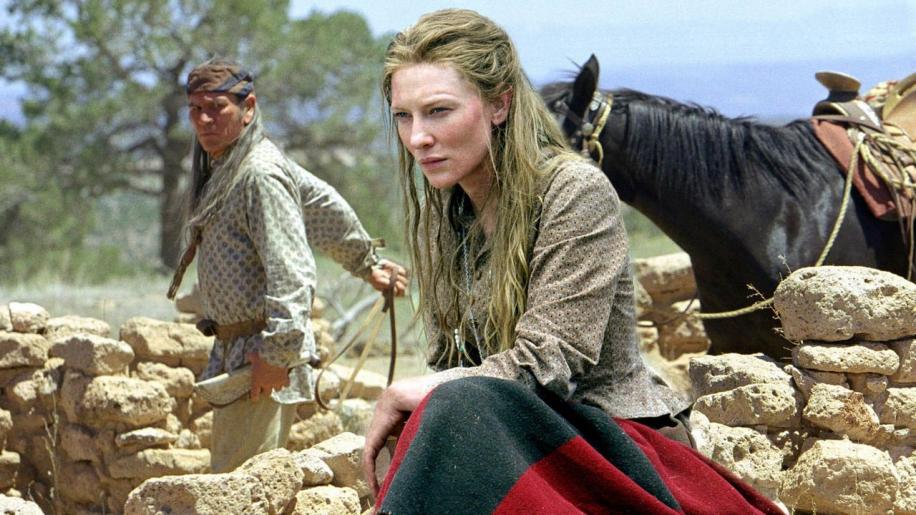 Overall, this is a pleasing picture. The print used for this master is pristine - blacks are solid, and edge enhancement, although very occasionally visible, is not too much of a distraction. Far more annoying are the player generated subtitles which are placed in the black bars below the scope frame in a nice bright yellow.

This is a pretty good mix. As you'd expect for a new film, the gunfights sound great, and the storm sequence will give your subwoofer a nice workout, but the quieter ambient effects are what impress. The surround mix is subtle, but effective. Although not encoded for it, I found that turning my amp to it's EX setting, activating my centre rear speaker, nicely opened up the rear sound stage.

This is a pretty good package. Apart from the trailers (of which Spiderman 2 and Hellboy are forced) all the rest of the extras are on the second disc. Let's take a look. First off are 11 deleted scenes: These range from 2-5 minutes and are in good shape. They are presented in a 1.85:1 ratio (not the full 2.40:1 like the movie) and are not anamorphic. Most of these sequences wouldn't look out of place in finished film, and are mainly character building scenes. Next are 3 alternate endings: All very similar to the actual ending in the film, not that interesting, Outtakes: 1.33:1 and pretty dull - lasting only 2-3 minutes, and mainly shows how bad Cate is as firing guns, and how weird producer Brian Gazer's hair actually is. We then have the Featurettes: The Last Ride: The Story Of “The Missing”: 1.33:1 and fairly fluffy at 5 minutes long. Next is New Frontiers: Making the Missing: 1.33:1. This is the meat and potatoes of the Featurettes, and is 29 minutes long. Lots of good behind the scenes clips, and fairly interesting interviews with most of the actors. There is a fair amount of back-patting, but hey, I like the movie, they deserve it. Moving on we have The Modern Westerns Score: 1.33.1. and 5 minutes long. James Horner and Ron Howard wax lyrical about the soundtrack. Next is Casting “The Missing”: 1.33.1 and 15 minutes long. Although different, this seems to repeat a lot of the New Frontiers information. Then we have Apache Language School: 1.33:1 and 6 minutes long. Dull. Dialogue coach explains how accurate attempts at language are in the film. Then Ron Howard on: Home Movies, John Wayne, Editing, the Film Making Process, His Love for Westerns, Conventions of Westerns: 1.33:1. This is a collection of 6 short interviews that range of 2 to 5 minutes long and really are interesting. Lots of good stories here. Next we have Ron Howard's home movies: The Deed of Daring Do/Cards, Cads, Guns, Gore and Death/Old Paint: 3 early short Super 8 films that Ron Howard directed. 1.33:1 ratio. They range from 2-7 minutes long. And rounding off the package are Photo galleries: Split into Cast, Production and Location. Quite a few photos here, some of the production ones are interesting.

Simply put - If you like westerns, this is a no brainer. For the rest of you, it's still a fine adventure story, but be warned: this movie earns its R rating with surprisingly violent content.

As far as the DVD goes, it's recommended.