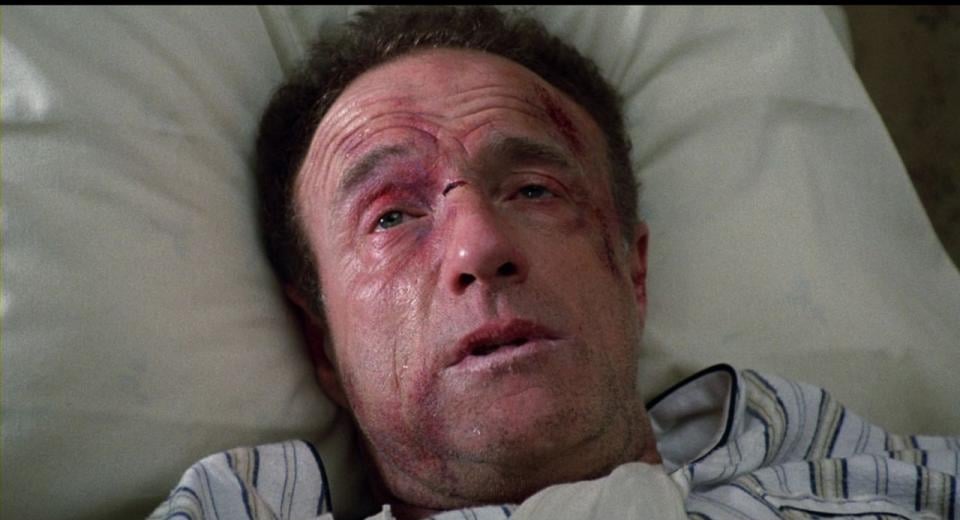 “Don’t even think about anyone coming for you, not the doctors, not your agent, not your family because I never called them. Nobody knows you’re here, and you better hope nothing happens to me, because if I die, you die.”

This one line from Kathy Bates sums up this entire, chilling film. As physiological thrillers go, the writing of Stephen King coupled with the direction of Rob Reiner has produced one of the all time best. It’s not the sort of film that has you trying to work out what will happen next, or who the next victim might be, as both villain and victim are far too well defined for that. But the charm and for that matter, the horror, comes from the apparent normality of the setting.

Our two leads are Kathy Bates who plays Annie, the middle aged, overweight ex nurse, living her solitary existence in her remote small holding with just her pet pig (called Misery) to keep her company and James Caan, the self-effacing writer of romantic pulp – Paul Sheldon. Set in mountainous Colorado, we start with Sheldon staying in a remote lodge to complete his latest novel. While driving back to his home in New York, he hits a blizzard and, as 1965 Mustangs were not noted for their road holding in snow, crashes down the mountain side, the car becoming almost buried in the snow. That might have been the end of him, had “His number one fan” Annie not found him, dragged him from the car and taken her back to her home. She tends his injuries and at first he is grateful for her help. It is not long however, before Annie’s true nature starts to show through, her first outburst over profanities in a manuscript she discovers Sheldon was carrying when he crashed

When he does not show up back in New York, his literary agent Marcia (the wonderful Lauren Bacall) becomes worried and phones the local Sheriff (Richard Farnsworth) – known as Buster and he starts to search for the errant writer. Despite his laid back demeanour, Buster launches quite an intensive search, sadly to no avail until really a little too late.

Sheldon’s books have mainly featured a character called Misery Chastain and have been the typical 19thcentury love stories so loved by middle aged single woman everywhere (so I am told!) While he sees the stories for what they are, trashy romance novels with very little literary merit, his fans immerse themselves in the stories, almost wishing they could become the characters themselves. Annie is just one such fan, and when she discovers that Sheldon has killed off the main character and therefore, the book series, her mood changes. Whatever her plans might have been before concerning to Sheldon’s freedom, he must now write a sequel that brings her favourite character back to life. Confined to bed by his broken legs, he has no option but to comply.

The tension is maintained magnificently throughout the film. Witness the rasp and scrape of the spoon as Annie feeds Sheldon. Sheer genius to make something so every day so chilling. The two sides of Annie’s character are so well played by Bates. The mousy, slightly over friendly churchy woman, not given to profanity or excesses gives way almost instantly to the nasty, possessive self-centred murderer we find out she already is. Sheldon discovers her past in her scrap book, which contains newspaper clippings detailing her life, including the death of her husband and her stint as a children’s nurse. For me, this aspect of her character is particularly poignant, as at the time of the film’s release, my home town of Grantham was going through the terror of a similar nurse killer in the shape of Beverly Allit. The similarities between this sub plot and the reality of what we witnessed is chillingly similar.

Despite the nature and story of the film, there are moments of humour in true Stephen King style which screenwriter William Goldman did a masterful job in translating the movie to screen. It was in essence, a complete re-write and should be considered as based upon the original story rather than a direct translation. Major changes include the setting of the film, moving it to Colorado, as well as some of the later scenes, where the context of some story elements have been changed for dramatic effect. Relocating to a small town set in the middle of nowhere was a wise move, as it made the female character more believable as a loner, living out her days out of the public gaze, something the book location struggled to deliver .

The most famous scene in the film is The Hobbling. When Annie realises that Sheldon can get out of his room and move around her home, she incapacitates him in a most gruesome and incredibly painful way. Fortunately there is still some fight left in Sheldon and we are set up for the final act. There is very little violence in this film, but what there is, is quite extreme, gory and realistic. Not a film for the squeamish then.

What this film misses in true horror suspense, it more than makes up for in narrative detail. There is very little glossing over of any aspect of the movie and scarily, it mostly feels all too believable. The setting does not date too badly, as fashions rarely change in these backwoods communities and the cars and furniture are pure 80s – with the exception of Sheldon’s Mustang.

Few would deny that Kathy Bates really makes this film. Everyone else is simply there to support her, even James Caan. Her Oscar for best actress was well deserved and you get the feeling the role was one of her most demanding. That is not to say the Caan or anyone else put in a bad performance, they do not, but they are all in Bate’s shadow, so to speak!

The cinematography is first rate throughout, being both creative and technically of a high standard. The music score is equally rounded, effortlessly following the action with a wide range of genres.

I am sometimes unconvinced about Rob Reiner. When he is good, his output – both as director and actor is superb, but too often, he just fails to step up to the plate. Maybe his interests are too wide, or he just loses focus, whatever the reason, I am glad to say that this is one of his best productions to date and I willingly postponed my reservations about him while watching this movie.

The finale is as violent, thrilling and suspensive as you could ever want. The outcome is quite predictable, but the road to get there is long and winding. There are plenty of false endings to keep the adrenalin up right until the final scene. Even then, there is the ever so slightly creepy epilogue to keep things sinister until the end…

I love this film. For me, it is claustrophobic, creepy and tinged perfectly with humour. This is no terror thrill ride, the suspense and horror coming through more subtle channels, but if you want to be left on the edge of your seat, gasping for air, you really should make an effort to watch this movie.