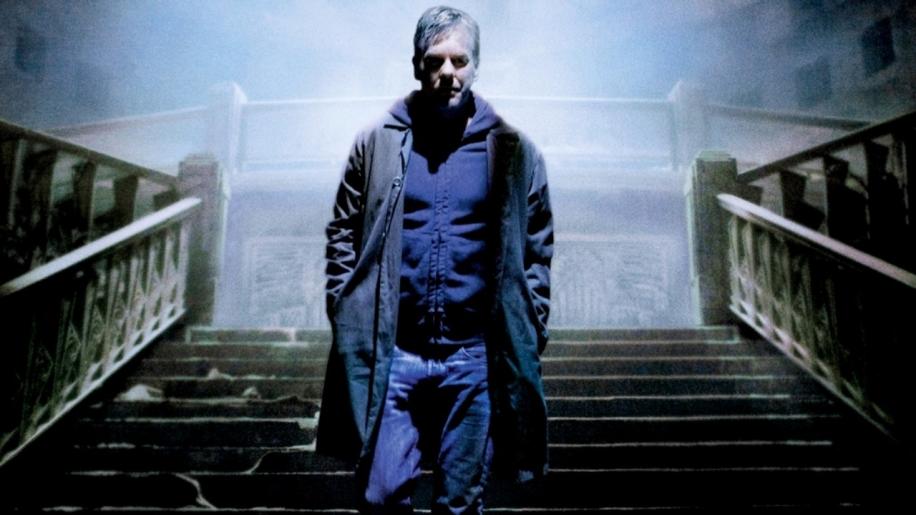 In 2003 Korean Sung-ho Kim directed Geoul Sokeuro, or Into the Mirror. Much like many other East Asian horrors this eventually found favour in Hollywood and they in turn decided to give it the glam rock treatment, hopefully bringing it to a wider audience. I will admit up front that I haven't seen the original on which this is based so obviously there is no way I can do a direct comparison. In the main though something usually gets lost in these translations, the remakes never really being quite as good, quite as inventive or quite as scary as their original counterparts. So how then in 2008 did Alexandre Aja (The Hills Have Eyes 2006) fare with writing and directing the adaptation?

Ben Carson (Kiefer Sutherland) has left the police force, incapable of coming to terms with killing a man. He's a recovering alcoholic, a physical and mental mess and after splitting up from his wife sleeping on his little sister's (Amy Smart) couch. To make ends meet and to try and get a better grip on his quickly diminishing reality he takes a job; night watchman at a burnt out shopping mall, The Mayflower.

Some years previously The Mayflower almost burned to the ground, hundreds of people were killed, the shell left standing due to a disputed insurance claim and it is the responsibility of the watchmen to ensure its safe keeping until this legal battle can be sorted out. On patrolling the building late at night though Ben starts to think that the huge and extensive mirrors in the building are somehow controlling him, somehow manipulating him. His imagination runs wild and eventually he starts to believe that the mirrors themselves were responsible for so called suicides in recent past and are now not not only turning their attentions on him but also his estranged wife and children.

Mirrors is an interesting premise of reflections ultimately causing the demise and madness of an individual. Throughout the ages mirrors have often been thought to have some mystical properties and the potential for a good psychological horror using these highly polished pieces of glass was quite intriguing. It was the 'reflection' of one Dorian Gray which after all gave us one of the best horror escapades of the last hundred odd years, albeit in the form of an oil painting but the similarities are there nevertheless. It is such a shame then that this film fails to deliver on the horror or even suspense aspect.

The frame is moody and there's some good use of slow panning shots around the charcoal remains of the interior of The Mayflower, but Aja never really makes use of this to the best degree. There's nothing in those shadows that perhaps catches your eye, nothing that perhaps had the slightest of movements and nothing in there other than the standard jump scenes which might get the viewer a little bit nervous, get them on the edge of their seat and for any horror film that is the only position they should be in when watching.

Similarly although the audio in this presentation is sufficiently detailed it is never used to its fullest extent, there's no subtle movements or sounds from the surrounds, no small pin drops from any channel which allows the viewer to sit up and take notice and wonder what's in the background, what's there even if you cannot see it. Shadow and sound for me at any rate are defining moments of horror, psychological horror or ghost stories especially, and for any such film to omit these I often come away feeling a little disappointed, a little short changed. There are exceptions to this rule obviously, but I do enjoy horror where you hear subtle movements not on screen; I feel it adds to the creepy atmosphere.

Mirrors ultimately reverts back to the all too standard schlock horror, replying on the frequently used birds flying across screen, or up from the ground, or in fact a disturbing scene in a bathroom which for some will no doubt steal and define the show but for me was just another example of Hollywood horror taking the easy way out and not really examining the real horror of someone's madness being instigated by his or her own reflection. Later, just as you think you might have a grip on the nature of these reflections and their origins, the film takes a twist and that twist in itself is not a bad one and perhaps should have been integrated into the storyline a little earlier than it was. Also the fact that this malevolent force simply goes after the protagonist's family rather than concentrate on him directly and fails to fully examine the relationship between oneself and one's inner horrors is again somewhat of a let down.

It is this extension to Ben Carter's family that produces some of the most ludicrous dialogue in the entire film. I have some time for Kiefer Sutherland, like his father before him I feel he is developing into a good enough (not great) but certainly a worthwhile and respected actor; and that's not just because of his machismo Jack Bauer character either. The dialogue between Ben and his wife Amy (Paula Patton) is at the best of times a little too far fetched. Ben, as an ex police officer, would have known to handle this somewhat differently because he would have known that if Joe Blogs came up to him and spouted these ideas he would have locked Joe up before you can say wibble, taking him off the streets for his own safety if nothing else. Equally Ben, ex-police officer or not, should know that trying to obtain police or coroner information on crime investigations would really turn to nothing, especially for a recovering alcoholic, and the fact that his estranged wife helps him far too easily in this quest pushed this just a little too far for my liking.

This disc contains both the theatrical and unrated editions so even if you have not had the opportunity to see this in the cinema then you can still compare the two here. Blink though and you'll miss it because this unrated edition is only ten seconds longer than the one shown in its theatrical run, slightly longer death scenes really being the order of the day. On a plus point I did have a wry smile when Ben driving to save his wife and kids shouts damnit in frustration and the end scenes do themselves have a good reference to his work in recent years at CTU.

On the whole then although I was looking forward to Mirrors from the offset I found it sadly wanting, lacking all the main components I essentially expect from such a feature to make me really sit up and take notice. Alexandre Aja previously dabbled his toes with The Hills Have Eyes, a remake from the 1977 version and whilst that in itself was a good enough adaptation the fact that this is another remake for me speaks volumes. He should have the spine to set out his stall and direct something fresh, perhaps then we'll see another side of him, perhaps then we'll see something a little more original but until that time we have this and Hills and certainly this one I found less than shocking and definitely less than horrific.