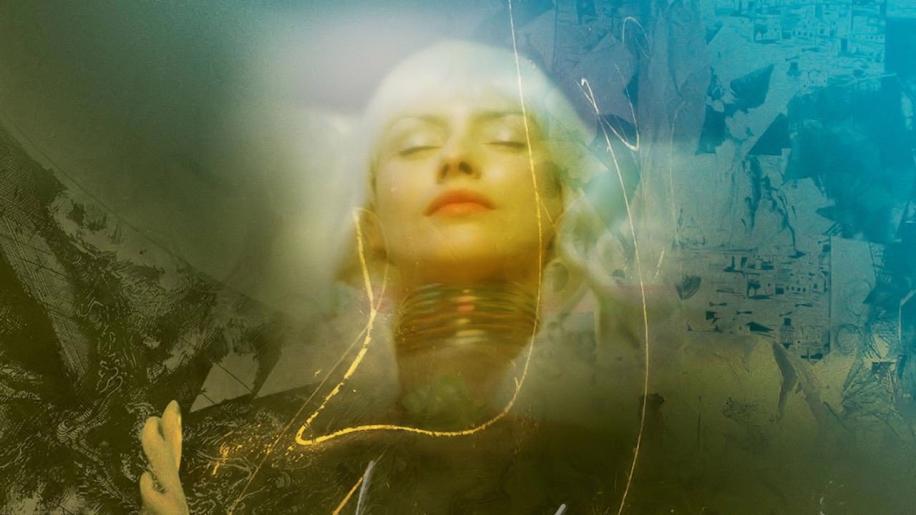 Most kids dream of running away and joining the circus, but for teenage Helena (Stephanie Leonidas) the dream is to run away from her family's circus and join the real world. She's sick of the greasepaint and the costumes and juggling under the Big Top and just wants to be like other kids her own age. An argument about these feelings just before a performance one night leads to her mother (played by Gina McKee) to collapse backstage with a mysterious ailment and the circus to hit poverty row - well, an extremely poignant and run-down-looking Brighton, actually - and poor Helena considers herself guilty of the sudden rush of bad luck. With her mother facing a life-saving operation and her father (Rob Brydon) struggling to find the cash to keep the circus afloat, she retreats into the world of her own drawings - beautiful pencil and ink doodlings that festoon her bedroom walls in the decrepit sea-front tenement where they live - and, after a fitful sleep, she does, indeed, awaken in a strange new land that seems to mimic a patchwork, cut and paste collage of the familiar and the bizarre. A land in which a White Queen lies in a deathlike sleep from which she cannot be roused, and a Dark Queen sends out her seeping blankets of inky black shadows to engulf the city of light, street by fairytale street. Only a charm, hidden somewhere between this battle between of Light and Dark, can save the White Queen and return order to this mysterious realm. A charm called a MirrorMask that young Helena must find if she is ever to return to her own world and save her mother and the circus, too.

“You young people ... it's all tea and muffins and excitement in your world.”

Such is the plot of the first feature film collaboration between joint masters of the fantastique, writer Neil (Neverwhere) Gaiman and artist/designer-turned-director Dave McKean. The two have enjoyed something like eighteen years of work together, with McKean illustrating many of Gaiman's books and graphic novels (from Violent Cases in 1987 and Mr. Punch in 1994, to The Wolves In The Walls from 2002 and the many famous Sandman sagas in-between), and the duo are justly celebrated for creating some magnificent flights of pure fancy and surreal terror. They are a truly unique and revered partnership. When The Jim Henson Company approached them with plans of a new fantasy project - the continuing popularity of The Dark Crystal and Labyrinth paving the way - they leapt at the chance. With both coming up with the general idea for the story - McKean's pretty detailed dream providing the backbone and Gaiman's continual penchant for exploring alternate realities and hidden worlds finding the correct tone and atmosphere for the adventure - they set about creating what is, in all honesty, a pretty experimental, avant-garde fantasy that will hold some spellbound and alienate others. It's safe to say that, unless you've read Gaiman and marvelled at McKean's wondrous visuals already, you've never seen anything quite like this before. With Gaiman writing the screenplay and McKean taking up the directorial chores, both have stamped their mesmerising hallmarks all over the movie. Blending CG backgrounds with animation and live-action, McKean's trademark aesthetic is instantly recognisable. His is a world of sketches, photographs and painterly abstractions woven seamlessly into a baroque and intricate canvas to concoct a lush miasma of visual splendour that is absolutely captivating and utterly poles apart from the likes of Lucasfilm's computer-controlled environments. Here we have inverted realities that render the image strangely akin to the pages of a graphic novel in that they appear to shun the 3D effect that everyone else strives for, in favour of remaining resolutely 2D in look and style. McKean serves up a set decoration that thrives on unusual textures and ethereal surfaces, his characters wandering through swirling, aged locales that break all laws of physics and logic, with light and shadow never utilised to enhance a photo-realistic look. Instead, MirrorMask wallows in the picture-book vogue of drawings come to life, of illustrations imbued with a vitality that catches the eye and never lets its go. The film is impressionistic, often sepia-tinted or golden-hued, and very elaborate in its design, with its roots firmly entrenched in the theatrical despite incorporating the latest technology. Watching it is like being smothered in a surrealist's latest work of art. The work of French comicbook artist Philippe Druillet is recalled with regards to the landscapes and some of the more delirious characters inhabiting them, even if McKean prefers to water down his colour scheme quite considerably in keeping with his own elegance.

“I understand that this must be quite painful for you ... but, really, it is just a chicken.”

The land into which Helena has fallen (and the obvious references to the likes of Alice In Wonderland and The Wizard Of Oz are prevalent throughout) has a population that are all shapes and sizes. Alongside reluctant guide Valentine, a young entrepreneur in need of a scheme, played by Titanic's Jason Barry, Helena encounters great stone giants who hang in the air like huge barrage balloons, nasty, riddle-loving Griffins, loose-nosed Monkeybirds and sinister sphinxes with an unhealthy appetite for strangers. We also have a grand librarian (brilliantly, and aptly, voiced by Stephen Fry) who is composed entirely of books, a patrol of tall, sticklike policemen, all voiced by Lenny Henry, a cryptic old mask-maker and continual shoals of flying fish slipping though the skies (slightly reminiscent of the traffic skirting over the surface of Coruscant in Star Wars Episodes 1 -3) and the frightening presence of the dreaded black ooze that carbonises all it swallows. The inhabitants that aren't weirdly-composed amalgamations of paper and spindles, all wear masks yet we know that they are often alter-egos of the people that Helena knows in the real world. Her father, Rob Brydon beneath what must be the worst mask in the entire film, also essays the beleaguered Prime Minister. Her mother also appears as both the sleeping White Queen and the nefarious Dark Queen, but both parents are actually mirror images of themselves in the real world. The Prime Minister is polite and only slightly sarcastic, but wholly ineffectual to the plight of his Queen, whilst the Mistresses of Light and Dark form the different sides of same parental coin that Helena was rebelling against to begin with. In another nice touch, Helena catches sight of herself back at home when she looks through certain windows, though she soon comes to realise that this is a doppelganger, the Dark Queen's daughter, who has swapped places with her. The whole thing is joyously episodic as she and Valentine pick up clues from the various oddities they meet, evade the ever-hungry sphinxes and the delightful eyeball-spiders that have been sent to spy on them, and attempt to piece together the mystery that links the two worlds together like some great metaphysical umbilical cord.

“This nonsense has gone on long enough. She needs to grow up and come home!”

Stephanie Leonidas exudes confidence as Helena. She possesses that cusp-of-womanhood attraction that follows the trend of Sarah Patterson in The Company Of Wolves, Mia Sara in Legend and Jennifer Connelly in Labyrinth. At once vulnerable and innocent, cocky and knowing, she carries about her an edgy sensuality that puts an altogether darker and more tantalising spin on the tale. Check out the scene when she is transformed from fragile young waif into dark, alluring princess. It's cut from the same cloth as Mia Sara's corruption by Darkness in Legend, but the effect is still the same. As an updating of Alice or Dorothy, Leonidas' Helena works surprisingly well, with a combination of streetwise sass and contemporary British savvy. Rob Brydon is his usual excellent self, but then he is just playing himself, albeit with his hallmark sarcasm toned down a little bit. Gina McKee's porcelain complexion and sad, wistful eyes go a long way here and, although I've never warmed to her (she's Hugh Grant's female double, in my opnion), she adds a reassuring familiarity and class to the film that is pleasant amid so much absurdity. And she looks quite stunning in the White Queen's long blonde hair. Jason Barry's Valentine is a richly unconventional character and the Irish actor embroiders the role with lots of humour and mischief. Collectively, the cast assure the film a beautiful British-ness in terms of style, wit and atmosphere. Something that didn't quite come off so well with the BBC's flawed and rarely-seen adaptation of Gaiman's Neverwhere, which came across as a particularly bad Doctor Who story and lacked all the magic of the original book.

But lacking magic is something that certainly cannot be said of MirrorMask, which is an unadulterated vision of wonder and delight from start to finish. I must stress that this may not be for everyone, it boasts a rather eclectic vibe and doesn't go out of its way to invite you into its dream-state unless you really want to go along for the ride. Fans of Gaiman and McKean will lap it up though. The plotting my be slight, but Gaiman's strength lies in the myriad distractions and sublimely quirky interludes that develop. He is interested in exploration - of new worlds, of broken minds, of the outer reaches of possibility when confronted by ordinary folk - and if the set-up and resolution feel light and obvious, then his point is surely that it is the journey, rather than the eventual destination, that matters. But then morals and life-lessons are not at the heart of plot, either. Helena may come to realise that her adventure is an atonement for her own perceived guilt at her mother's plight, but the quest she undergoes has the allure of a drug-fugue, a hallucinogenic myth that manufactures its own haphazard logic as it bubbles along. In today's fantasies there is nothing that can quite match MirrorMask's, or Neil Gaiman's, ability to weave a fairytale in such a complete and enriching manner. Sure, the film feels small and kind of insular and has the darkly sinister core of medieval mischief that embodies the human circus, the art of puppetry and magic entwined around its storytelling, but it is still a sensationally evocative treat for the eyes and the mind. Iain Bellamy's score echoes the clash of the contemporary with the bygone arts, being a modern jazz-fusion incorporating soaring European vocals and diversely complex instrumentation. The real-life musicians, including Bellamy, can be seen at the start of the film playing the circus orchestra. Ironically, or perhaps fittingly, they are wearing masks.

MirrorMask is an unusual film that will stimulate or mystify. If you are open to its deceptively simple splendours, you will find much to savour. I loved it. But I am aware that its audience may well be limited - its style just isn't to everyone's taste. That The Jim Henson Company and Sony executives took it on board is cause for celebration. Anything that gets Neil Gaiman's and Dave McKean's work out into the cinematic medium is going to be a rare treat and I look forward immensely to their next movie project together. A project that I, for one, feel has been a great success. Long may their collaboration continue.