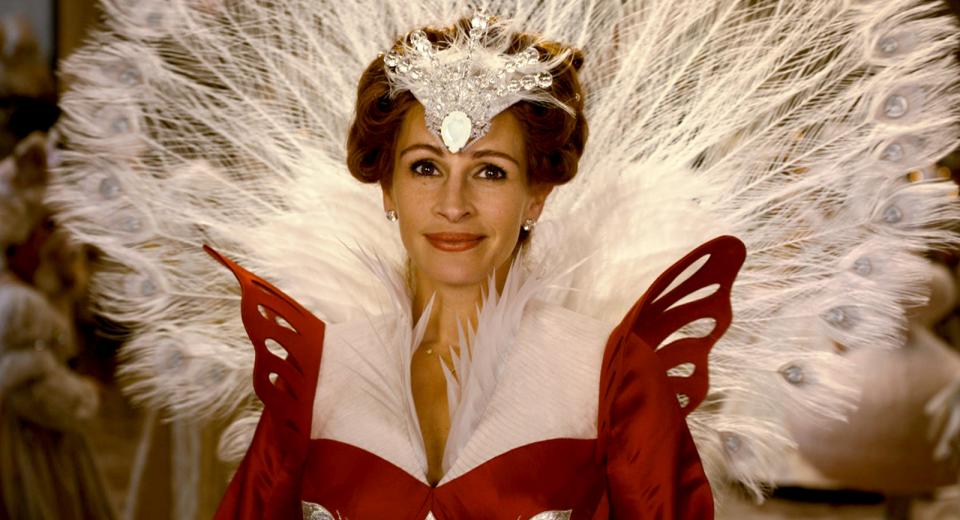 Re-makes of Snow White have been many and varied over the years and when this one landed on the door mat, I inwardly groaned. I was expecting another soppy Disneyesque fairy tale, making no more than a passing nod to the Brothers Grimm. I need to say at the outset I was pleasantly surprised. This is genuinely a good family movie, one the kids liked as much as me. Ok, it’s not without its problems, but on the whole it is extremely watchable and entertaining.

Tarsem Singh is an Americanised Indian director who has made some impact in the industry, but with only a handful of titles over the last 10 years or so, he would hardly seem to be the person to persuade Julia Roberts to sign up to his latest venture. Yet in interviews she acknowledges that it was only after they met that she agreed to take the part. The rest of the cast is a little more “B List”, but they still put in a fine performance. Lily Collins is a perfect foil to evil queen Roberts and the frission between the Prince (Armie Hammer) and the pair of them is funny and well described.

The Grimm fairy tale story of Snow White for those of you with a deprived childhood is not quite a sweet as the Disney cartoon might have you believe. On the flip side though, it’s not as funny as this film either and probably not quite as dark. The King is believed dead in the forest, having fallen to “The Beast” and his evil second wife has taken the throne. Her step daughter – Snow White gets the rough end of the stick as the Queen realises that the proletariat would rally behind her because of her abundant beauty, charm and legitimate right to the throne. Much of this early part of the story is told in Tim Burton style marionette animation – a refreshing change to the page turning illuminated manuscript. This also sets the style for the rest of the movie, with earthy tones and a strong musical score.

The mirror scenes within the film are almost surreal in their presentation. We are transported into a different world where the mirror is more than just a teller of truth, but the Queen’s alter ego. She enters into the mirror and emerges in an entirely different environment. This is a clever deviation from the original tale and leaves room for some witty repost – watch out for the puppy love!

Down trodden Princess Snow White is turning eighteen and is expecting a coming of age party. Silly girl, she should have guessed by now that this is about as likely as Satan driving to work in a snow plough. Emboldened by the kitchen staff, she breaks her step mother’s strict rules and decides to leave the castle. Upon entering the town, she sees for herself the impact of the evil woman’s over taxing to fund the extravagant lifestyle of the court and also the lies she has told the townspeople.

Cue the entrance of the Prince. Ambushed and outsmarted by seven bandit dwarfs, he ends up hanging upside down alongside his valet. Who should find him, but Snow White herself. She unties them and sets them on their way. They meet up with the evil Queen and the love triangle is set up. I think I am right in saying that this is the first re-telling of the story where both the Queen and Princess fall for the Prince, but in any case, it makes for a fun little plot line.

The sets are pure fantasy, but have a certain look to them. The designers have had a long look at the Narnia trilogy I believe, with both the structure and colourising of many scenes feeling quite similar. This is no bad thing, as the whole fantasy landscape works very well. This is not the sanitised over saturated Disney landscape, nor the other-worldness creations of the Lord of the Rings films, but a harsh cold look that sums up the Queen’s character really well. The storyline is quite straight forward and is not going to tax all but the youngest viewers. They won’t get all the humour, but that’s the attraction behind all good films, with different age groups gaining different satisfaction.

There are a few plot issues. The Princess is supposedly hated by the Queen, yet is dressed immaculately and was obviously expecting to be treated to a party for her Eighteenth. Maybe Singh was trying to portray her naivety to her situation, but it is a little unclear. To be honest though, the average family audience really won’t care and will be laughing at the subtle humour, giggling at the semi naked prince and booing and hissing at the Queen. All good pantomime stuff.

Where would Snow White be without its seven dwarfs? Sorry, under current legislation, I should refer to them as persons of restricted growth I understand, however they seem to be quite happy being called dwarfs in the film, so let’s go with that. Whatever their correct social grouping, they are very funny and not at all stereotypical. Of course the reason for their banditry is all the Queen’s fault. They had good jobs in the town under the rule of the old King, but she had them ostracised from society and mining was not for them, so thieving became their way of life. Snow White meets them in the traditional way having been cast out of the castle to be killed by the beast in the forest by evil Step-Mummy, she falls into the Dwarf’s hands who quickly decide she’s a “keeper”. Of course, she objects to their mercenary ways and soon has them re-grouped into more like Robin Hood and his (Her?) merry men. In return, they get her a new outfit and teach her a few fighting moves.

So how will the old Queen seduce the charming young Prince? With magic of course. Those aren’t wrinkles around her face she tells her magic mirror, “Just crinkles”. The truth is, of course, that she is old enough to be his mother and so a love potion is required. But how will Snow White break the spell?

The interaction between the Prince and Princess is very funny and particularly the sword fight scene complete with some light S&M in the forest. Although we are left in no doubt about where the film will head to in the end, getting there is humourous and at least in part unexpected. More dark magic exploits from the Queen include the puppet warriors she sends to duff up the dwarfs and where would we be without a poison apple?

The main deviation from the original fairy tale revolves around the beast in the forest. Without wrecking the movie for you, I would imagine many will have already guessed the outcome before the secret is revealed. Of course, being a fairy tale, all the good characters live happily ever after. There are a few issues around the interaction between some characters, as they are not clearly baddies or goodies. Now we grownups know that in real life we cannot separate people so easily but for a child, they need things simple. Julia Roberts was quoted as saying she felt her character was just too nasty, but this really does not come across. I made a more direct comparison to Queenie from Blackadder II and see her more as uncaring and arrogant than downright evil. Maybe she needed a few more cackles and careless disposals of those that crossed her.

The sound track is not the best in the world. It just feels a little disconnected at times, with the music, vocals and sound track not quite meshing as well as they might. One point of interest, when playing the DVD included in the same set, the DTS sound track actually sounds somewhat better in this respect. I think the harder compression applied to limit the dynamic range has the effect of squishing everything in a bit tighter.

Without doubt a highlight of the film will be missed by many, as it takes part during the closing credits. A huge Bollywood dance sequence that really should have found a place in the film itself. As an epilogue, it is totally wasted.

To sum up, a good Sunday afternoon film. It’s never going to win awards, but it may just become a modern classic and it certainly rates as one of the better re-makes of the classic tale. Some may be disappointed that it is not simply a live action Disney re-make, but in my opinion, it’s all the better for it.