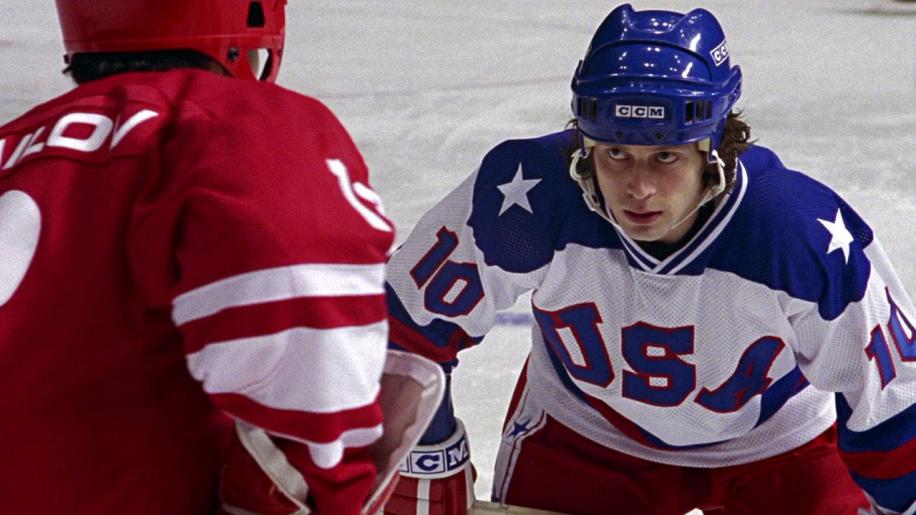 Miracle - so that must be the story of the second coming of Christ? No? Well it must be a true story about survival against terrible adversity? No again. This is, with the usual moviemakers flair for hyperbole, the true story of team USA competing for the hockey gold medal in the 1980 Lake Placed Winter Olympics. Hardly a miracle then, but to be fair to the director and producer, the title is taken from the commentary of veteran sports commentator Al Michaels who, as the final whistle blew on an amazing match between red hot favourites the USSR and the underdog amateurs of the USA, asked the audience “Do you believe in miracles?”

For those of you who don't know the outcome of the true story of the ice hockey, don't worry, I won't give away the ending. Set in a post Watergate USA the film tells the true story of the inspirational, forward thinking coach, Herb Brooks (Kurt Russell in a deft and commanding performance) and his bunch of under funded college kids who are picked to play for the Olympic team. Combating the selection committee and public apathy in a minority sport that the USSR had won in the previous four Olympics, Brooks sets out to train a team capable of beating the USSR and winning the gold medal. The movie follows the formation and melding of 20 individuals into a team, and is both stirring and poignant.

I must admit to having a bit of a soft spot for a sports drama and the triumph of an underdog against seemingly insurmountable odds, heck I even enjoyed the woeful [b]Escape To Victory[/b] and although a true story Miracle is like many that have gone before. Sure there is a large element of jingoism in the story arc, but you can forgive that when the events were every bit as remarkable as portrayed. A largely unknown young cast produce just the right blend of angst, pathos and sympathy without the situations and dialogue becoming too girly. The recreation of the era is spot on right down to the awful hairstyles and large amounts of tasteless check shirts and nylon “slacks”, and towering majestically above it all is the exhilarating drama of the ice hockey itself. The director Gavin O'Connor should be credited for making such exhaustive steps to reproduce the action in such a visceral and realistic way. This movie will put you in the action the way that Saving Private Ryan does for war movies. In the same way that the story of Seabiscuit was more than just a horse story so Miracle is more than just a hockey story. It doesn't matter if you're a fan of the sport you can still enjoy the raw emotion of a wonderful human drama