Another mini marvel from Minix? 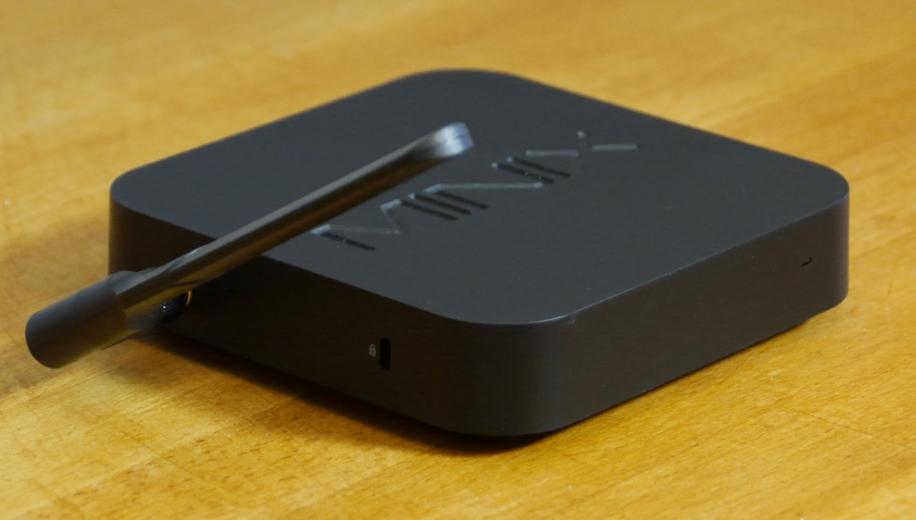 This Windows 10 Mini-PC is the successor to the company’s Z64W device and its small form-factor and fan-less design make it a good candidate for ‘TV box’ duties, as well as ‘regular’ computing. The chipset is Ultra HD capable and past experiences with it have been positive in terms of media playback duties, so the Minix Z83-4 might make for a really good all-rounder. At the time of writing (December 2016), the Z83-4 is available for between £125 and £145, depending on where you shop, so it’s a tad more expensive than the better Android TV media hubs we review but Windows does offer something different.

The Z83-4 runs from an Intel Atom x5-Z8300 ‘Cherry Trail’ quadcore processor with on-board intel HD graphics and 4GB of DDR3L system memory (RAM). There is 32GB of eMMC 5.0 flash storage built-in, with 15.6GB available upon first use so, by default, there’s not a lot of room available for updates. Before testing, we updated to the latest BIOS version available from the Minix website - V1.04.

The Neo Z83-4 follows a familiar Minix design template with a high quality black plastic casing and the company logo etched on top. The dimensions of the box come in at 130x130x20mm (DxWxH) with much of the height, internally, taken up by a pretty serious looking heatsink. It’s worth mentioning that the Z83-4 isn’t supplied with any means of control so you’ll need to supply your own. We used a Logitech K400 wireless keyboard for the majority of the review, with a Minix A2 Lite for more of a remote control feel for media duties – both worked without issues. We were pleased to see that the WiFi (up to 802.11ac) and Bluetooth (v4.2) antenna is optionally installed to a nub on the left-hand side of the casing, as not everyone will necessarily want it attached. On the right-hand side there is a power button and a generous set of 4 USB ports, with three v2.0 and one v3.0 available. At the rear is a Gigabit LAN port, an HDMI 1.4 connection and a mini 1.2 DisplayPort together with a 3.5mm audio out jack for headphones or speakers. We’ve had the Neo Z83-4 hooked up to our monitor and TVs for around 3 weeks and used it as our primary PC for creating documents, re-encoding short videos, photo-editing and all the usual PC duties like web browsing and emails and it’s been great to use with no noteworthy issues to report. General read/write speeds to the built-in flash storage were as expected and top out around 140 MB/s read and 70 MB write with performance to an attached Samsung USB 3.0 hard drive slightly slower read at 93MB/s but write was faster at 96 MB/s. Performance over our Gigabit network was very good with files transferred at up to 82 MB/s and Wireless to our 802.11ac router clocked at around 50 Mb/s, which is very good and actually slightly better than we got with the higher-specced and considerably more expensive NGC-1. As a result, streaming games from our Xbox One to the Z83-4 was no issue on either connection at highest quality so we had a happy seven-year-old in the house (and an equally happy forty-six year old). The Neo Z83-4 might not be for power users but it’s more than serviceable for the majority out there.

As per our normal testing regime, files were stored on a QNAP NAS on a gigabit network, as well as a Samsung M3 USB 3.0 HDD. Video and audio was assessed using a Samsung UE65JU7000 and two older Full HD TVs, via a Yamaha RXV-V679, using the latest stable build of open source media software KODI (Version 16.2). We also used a development build of KODI v17, which features playback of 3D video for Intel chipsets.

Beginning with the 4K/Ultra HD tests:

The Z83-4 performed exactly to spec here in that it had no issues with Ultra HD up to 30 frames per second but was incapable with anything above and the chipset doesn't support 10-bit HEVC encoding. We don't see a massive issue with the framerate being capped to thirty - 4K movies and 'major' TV series aren't likely to move from 24/23.976 fps anytime soon but the lack of 10-bit HEVC support is likely to be more troubling, going forwards.

We know from previous experience that the Intel x5-Z8300 provides excellent image quality for Full HD (1080p) and below, using more established codecs and so it proved with the Minix Z83-4:
The Minix passed the standard and high definition tests with flying colours. One thing we 'bang on' about frequently in our reviews is the ability of a device to automatically adjust the video output frequency to complement the framerate of the content being played, with the support of the software playing back the media, of course. In this respect, the Z83-4 and KODI work in perfect tandem, at all resolutions, which is a definite plus point.

As we noted above, the networking speeds of the Minix Z83-4 are very impressive so we were expecting good things here with videos encoded at extremely high bit rates:
For reference, a full Blu-ray rip with no compression will top out at 48 Mbps but Ultra HD content needs up to 108 Mbps so the tests are fairly harsh but then it's always good to know there's headroom available. As we can see with the Minix, provided network conditions allow or you connect storage via USB, should have no issues with either in terms of bit rate but, again, the inability to handle 10-bit HEVC will likely be the more defining feature.

KODI 17 is nearing its first non Beta release and the 3D MVC fork of it, by one of its developers, is also looking fairly complete now so installing the 3D version doesn't come with any limitations that we've noted. Obviously if you've no interest in 3D, the main version makes more sense as development won't be so reliant on one person's efforts. Before testing we made sure Windows and intel drivers were up to date and to our glee, we didn't have to mess around any further to get things working:
The Z83-4 provided excellent 3D quality and with both MVC and ISO, the switching of our TV in to 3D mode was automatic, althoug both top and bottom and side by side files needed our intervention with the remote control.

While we couldn't get the Z83-4 to bitstream HD audio formats, all was far from lost:
In one way or another, the Z83-4 was able to play all the HD audio files we fed it, except Dolby Digital Plus 7.1 which was down-mixed to DD+ 5.1. The issue, for some, will be the fact that the audio is decoded and sent to the amp/receiver as uncompressed PCM so you won't get the Dolby or DTS lights on the display of your AV Receiver. If that's an issuefor you, you'll need to look for another solution but, for many, this should be a sufficiently good performance.

We can think of no hardware or operational reasons not to recommend the Minix Z83-4. The build quality, as usual from this manufacturer, is very good, with a high quality casing enclosing some fairly serious looking cooling making it stable over long operating hours and when playing demanding video files. The Minix comes with a fully licensed copy of Windows 10 at its circa £130 (December 2016) price-tag and with 4GB of RAM on-board, it easily handles the demands of Microsoft's latest operating system. Connectivity options are good, also, with four USB ports (3xv2.0 & 1 x v3.0), both DisplayPort and HDMI ports, a mini SD card slot, useful for expanding the built-in (and not enough for long term use) 32GB of storage. The Z83-4 also boasts Gigabit LAN connectivity, Bluetooth 4.2 and Wi-Fi capability up to 802.11ac.

The device also receives good after-sales support, with Minix proactively supplying BIOS updates and a dedicated forum for users. In terms of 'everyday' computing, the Minix Z83-4 will likely be as much as most will ever need, with impressive networking speeds and strong all-round performance. It's not a powerhouse, by any means, but users with processor intensive needs would never be shopping in this market. Allied to its all-purpose strenghts, the chipset is also well supported for media playback, including Ultra HD video, HD audio decoding and 3D playback. It's not without its limitations, however, as 4K is limited to 30 frames per second and the chip-set doesn't support 10-bit HEVC or HDR playback. Still, with those being such niche requirements, we're more than happy to recommend the Minix Z83-4 for the majority of users out there.

The only direct competitor in the Windows 10 space that we're happy to recommend as an alternative to the Minix would be the Tronsmart Ara X5 Plus which features near identical capabilities, although it's not as well built and the networking performance is inferior. If you're willing to overlook those aspects, however, the Ara X5 Plus can be picked up for a whisker over £100.