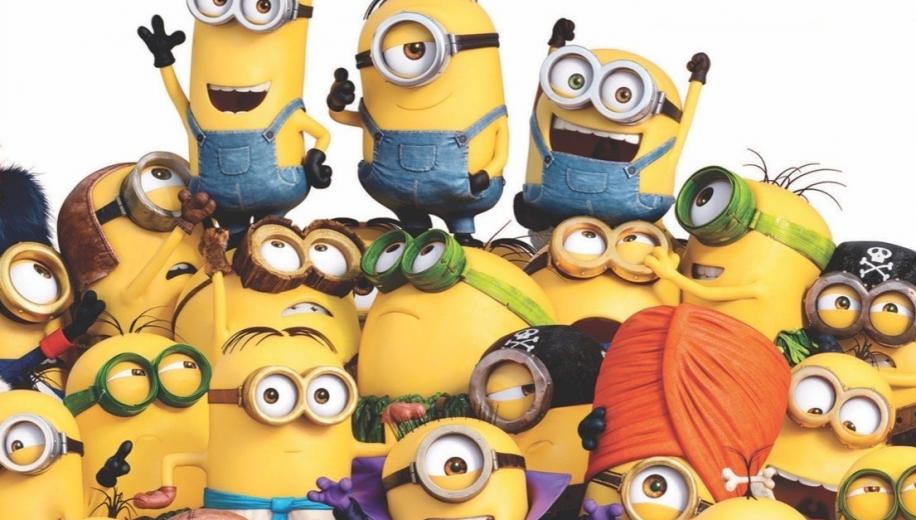 Minions may entertain younger audiences with ease, but it can't compete with its Despicable Me brethren.

The story’s prehistoric premise remains the highlight of this unnecessary stop-gap spin-off, charting the single-celled evolution of these single-minded creatures, perpetually searching for the next great supervillain to follow – normally because they didn’t do a very good job keeping the last one alive. After thousands of years in exile, they send out a search party to find a new master, taking 60s New York by storm, and following celebrated villain Scarlett Overkill in her quest to steal the British crown jewels. At its best, Minions remains eagerly silly, making the most of the physical humour and easily interpretable hijinks which can be understood irrespective of the ‘language’ barrier, and playing up to its child-dominated audience, but unfortunately also alienating its adult following where its predecessors did not.
Its primary weakness comes nominally in the form of the villainous Scarlett Overkill who, despite the best efforts of Sandra Bullock – with Jon Hamm hamming it up as her chilled out partner in crime – isn’t much of an evil presence at the end of the day. The minions are enough to kick-start the premise, but even before they hit London, the joke is wearing thin, and the clichéd royal shenanigans don’t provide much intrigue as the final act events slowly roll towards a nominally engaging climax. It’s safe to say that the minions are fun enough to fuel short films on their own, but in terms of full-length features the reality is that, without Gru and the Despicable Me setup, they can’t quite make it over the finish line. Minions ultimately only highlights its place as a stop-gap until the recently-released third movie returned the series to form. Despicable Me and it's sequel were always reference discs on Blu-ray, and Minions, despite the less impressive content, was every bit as impressive on the video front, so it's unsurprising that, just in time for the release of the third Despicable Me on Ultra HD Blu-ray, we're finally getting Minions to round out the collection of the original films on Ultra HD Blu-ray.

It may well be limited by a 2K Digital Intermediate (DI), resulting in a 4K upscale, but this Ultra HD Blu-ray disc boasts a 2160p presentation, framed in the movie's original theatrical aspect ratio of 1.85:1 widescreen. The disc uses 10-bit video depth, a Wider Colour Gamut (WCG) and High Dynamic Range (HDR), and is encoded using the HEVC (H.265) codec.

The gorgeous image, popping with prehistoric primaries in the first instance, before lapping up the vibrant hues of the swinging sixties, has plenty to showcase in terms of HDR and WCG implementation. Brilliant blue skies, lush greens, and of course the banana yellow of the lovable lumps themselves; they all make for striking tones in a rich landscape, with strong black levels enriching the darker sequences. Indeed the veritable pop on offer here courtesy of the Ultra HD Blu-ray's visual tools allows for a presentation that's almost as impressive in terms of depth as its full 3D counterpart, only falling down because, ultimately, Minions (and the Despicable Me movies) uses 3D in such an unabashed way that even premium HDR and WCG implementation can't compete. Nevertheless it's a great looking piece, with striking detail that provides fantastic nuances and textures on the objects and the bubbly yellow characters, and simply no flaws whatsoever. Sure it's only upscaled 4K, rather than native, but it's still a demo presentation which only loses a mark because, technically, it lacks the same Dolby Vision cherry on the cake that the Despicable Me's had. Cas Harlow reviewed the audio using a standard 5.1-channel setup – Whilst perhaps missing that distinctive thematic score that underpinned Despicable Me and Despicable Me 2,Minions nevertheless has all of the remaining ingredients necessary to make for a diverse, detailed and effective audio track. Dialogue – albeit predominately limited to the made-up minionese language – is still evenly disseminated across the frontal array, prioritised over the fronts and centre channels where appropriate. Effects are varied and impressive, from the stomp of dinosaurs to the boom of explosives, with bustling New York streets, villain conventions and Royal tributes providing immersive crowd-based environments, whilst the more energetic action sequences light up the sound-stage with fantastically intricate design. The score, as aforementioned, isn’t quite as good as it could have been, but nonetheless completes this technically outstanding package.


The aural accompaniment is fabulous too, especially in Dolby Atmos

Steve Withers reviewed the audio using a 7.2.4-channel Dolby Atmos setup – Whilst the basic 7.1-channel Dolby TrueHD soundtrack is excellent, offering a superb surround experience, the Dolby Atmos track is something of a disappointment. In fact the overhead speakers hardly ever get used, making it difficult to distinguish the Atmos track from the more traditional one. It's surprising because the soundtrack for an animated film is constructed from the ground up, making it ideal for an object-based mix. Sadly despite all the comic capers on screen, the sound designers have failed to take full advantage of the additional channels available to them. As a result whilst it remains a great soundtrack, it is one of the least impressive Dolby Atmos mixes that we have heard, which is a shame because it had so much potential. There are certain Dolby Atmos soundtracks, like Mission: Impossible - Rogue Nation, that could convince anyone sat on the fence to take the immersive audio plunge, but Minions isn't one of them. As with Universal's release of Minions in 3D, and indeed its earlier releases of the Despicable Me movies on Ultra HD Blu-ray, the only extras on the actual Ultra HD Blu-ray disc itself are the 3 mini-movies (which are arguably the best extras anyway), with everything else left for the accompanying Blu-ray disc.


The only extras on the UHD disc are the mini-movies, which are arguably the best extras anyway.

On the Blu-ray we also get all the original extras; the Jingle Bells sing-a-long with the minions as well as an Interactive Map which provides some behind the scenes information. Here you can dip around several locations used in the film (and several that weren’t) and look at pre-vis effects, background interviews and brief glimpses of deleted footage, often storyboarded. A further Interactive Guide allows you to look into core elements of the production, from the animation to the music, with yet further interviews and behind the scenes information. The minions are fun enough to fuel short films, but in full-length features they can’t quite make it over the finish line

Minions slowly crawls onto 4K Ultra HD Blu-ray in the wake of the first two superior Despicable Me movies and in advance of the also-superior third. It offers the same audio and extras as the previous Blu-ray release, leaving it down to the video to decide upon an upgrade and, frankly, without even sporting the same Dolby Vision enticement that the Despicable Me's had, you'd have to be a die-hard fan to pick this up.