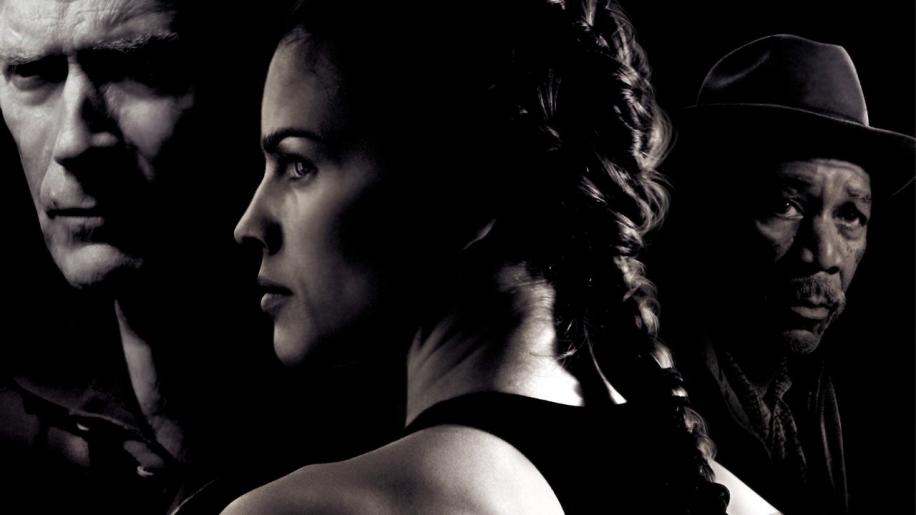 Million Dollar Baby is presented in a sumptuous 2.35:1 aspect ratio anamorphically enhanced widescreen transfer. Eastwood seems as at home filming in the ring as he is doing his trademark shadow-cast reflective cinematography and the transfer thankfully does his masterpiece justice, with excellent detail and clarity throughout. There is no softness and no grain apparent whatsoever - nor is there any sign of edge enhancement. The colour scheme is quite muted at times, but still remains sparklingly accurate with deep blacks that make the shadows solid. It is a superb visual presentation.

Million Dollar Baby similarly gets fantastic audio treatment with one of the best Dolby Digital 5.1 tracks that I have come across recently. The dialogue is always clear and at the forefront, with brilliant directionality that comes through even more so with respect to the effects. At one point Dunn and Maggie are having a chat at a dinner table opposite some slot machines and you can here the machines ringing out in the rears before the camera pans around to show you where the noise is coming from. The track exhibits brilliant observation of the nuances and background sounds, as well as the power and thump of the punches themselves. Most notable, however, is the score - composed by Eastwood himself - which showcases his trademark Spanish guitars and sombre violin accompaniment. It is perfectly suited to the on-screen drama and rounds off a superb audio track. One minor quibble - and it is minor - was that I found Freeman's voiceover occasionally too soft, but since I noticed that with his foreword and coda to War of the Worlds as well, I assume the fault lies not with the track.

For a two-disc special edition, also sold in a three-disc release with the excellent soundtrack, I was slightly disappointed by the lack of commentary. Words of wisdom from all or any of the three main stars would have been fantastic with Eastwood obviously having the edge considering his directorial, production etc. contribution to the project. Unfortunately, aside from the theatrical trailer - which thankfully does not give away anything other than a taste for the movie - the first disc has nothing to offer in the way of special features.

The second disc, on the other hand, tries its best to make up for the first with three hefty documentaries about the film. Born to Fight is a twenty-minute featurette purportedly comparing the story with the history of real-life boxer, Lucia Rijker - who also plays one of the opponents in the movie. It features interviews with all of the major cast and crew, from Swank discussing why somebody would want to become a boxer, to Eastwood talking about the dreams that drive the individuals who populate the gym. Rijker herself does pop up, initially just talking about the film, but eventually drawing some parallels with her fighting and life experiences. Freeman is there as well, talking about the characters but this is really Swanks baby as she contributes the most. It is an interesting featurette with a few glimpses of behind the scenes sparring but it does have too much footage from the main film itself, predominant in featurettes of this nature.

The Producers' Round 15 is a thirteen-minute behind the scenes featurette that has much less film footage and is littered with production stills and background clips. Narrated by the producers, it goes through the whole production history - from the story they had to the real-life characters (including, most interestingly, the man who Clint Eastwood's character, Dunn was based on) and the cast that portrayed them. It is quite a good featurette because of the background it gives into the production and it probably represents the next best thing to a commentary on the main film.

Finally, James Lipton Takes on Three is a twenty-five minute roundtable discussion 'moderator' Lipton and the three main contributors - Eastwood, Swank and Freeman. Sitting on the table are their Academy Awards and much of the chat is devoted to what made the film deserving of the recognition that it received. They are all extremely modest and at the same time praising of the movie and its significance. It doesn't take very long for Lipton to becoming annoying - although he does redeem himself slightly with a modicum of praise to the trio - and the contributions are often just snippets of dialogue because of his stupid list of questions and interruptions. Still, we get plenty of background into Eastwood's filming techniques, Freeman's influences and Swank's getting into movies and it is great to have this much input from these three heavy hitters.

Clint Eastwood has fashioned yet another magnificent film that is likely to go down in film history, with superb performances and a refreshingly unpredictable story. This lovely two-disc edition allows for superb video and audio presentation along with a second disc of solid extras. I would not advocate a rental for this gem, it's a vital addition to anybody's collection and gets a 'buy now' recommendation from me.