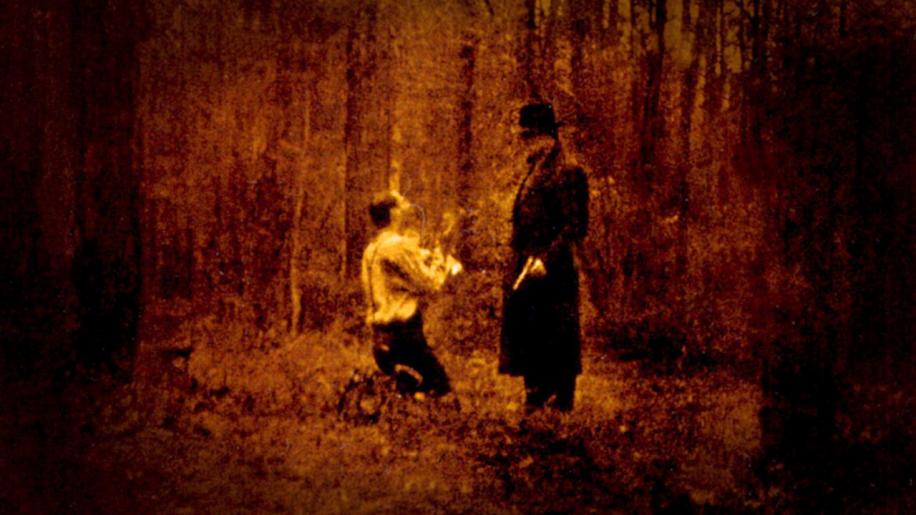 Elements from both of Dashiell “The Maltese Falcon” Hammett’s novels, Red Harvest and The Glass Key, have been the basis for several screen adaptations over the years, coming to life in all manner of adventurous reincarnations, from the outstanding Kurosawa/Mifune Samurai-Western, Yojimbo, to the classic Leone/Eastwood Spaghetti Western A Fistful of Dollars. ‘Dollars was the first of many films to effectively remake Yojimbo, rather than be directly inspired by Hammett’s work, although arguably this is purely a lack of correct acknowledgement; the less-well known latter-day variations included the unintentionally hilarious Van Damme actioner Desert Heat and the disappointingly by-the-numbers, should-have-been-better Walter Hill action-thriller Last Man Standing, with Bruce Willis.

Perhaps one of the most adventurous alternative interpretations of Hammett’s work has come from the oddball Directors, the Coen Brothers, whose strange sense of humour and offbeat, distinctively unpredictable manner of storytelling has secured them as many dedicated fans as it has guaranteed them alienated detractors. Some would regard this as being akin to the ‘marmite effect’, and it applies as much to the overriding style in their body of work as a whole, as it does to each of their individual productions. Personally, whilst I absolutely adore a couple of their films (including the Big Lebowski), and admire a couple of others (No Country For Old Men – even though it did try too hard to play against type), I simply don’t have time for many of their critically acclaimed efforts – the dark, pitch black humour of both Blood Simple and Fargo falling short of drawing me in to films which were totally devoid of likeable characters; the more adventurous musical O Brother Where Art Thou was just plain painful; and the quirky Barton Fink was simply too quirky. Ironically Barton Fink is the distant cousin of one of my all-time favourite Coen Brothers movies, the elegant, highly original adaptation of Hammett’s books that is Miller’s Crossing: a film noir with a twist.

The story takes us back to Prohibition-era America, where we find ourselves in the company of corrupt cops, crooked businessmen and vicious gangsters, vying for control of the territory. Leo O’Bannon is a tough, old-school Irish gang boss, who is having trouble retaining controlling power of the City. His biggest rival is Italian boss Johnny Caspar, and when Caspar approaches Leo to announce his intention to kill a certain Bernie Bernbaum, a crooked bookie who has been stealing from him, Leo goes against the advice of his right-hand man Tom Reagan, and warns off Caspar, thus sparking a potential gang war. Reagan knows all the angles – he knows that Leo’s unfaithful girlfriend Vera is Bernie’s sister, and that this is the reason why Leo is resisting the hit, but he also knows the damage that could be done from an all-out war. Can Reagan save his mob boss from ruin, and prevent the two rival gangs from tearing each other apart, or will his own issues of alcoholism and massive gambling (as well as the fact that he is the one who Vera is being unfaithful with) cause his own downfall?

Although the Prohibition-era period is accurate in so far as the original source novels were set around this time, and the warring gang factions and their corresponding inner machinations could easily be paralleled with the equivalent events, Miller’s Crossing is a vastly different animal to all other adaptations in terms of style. Unquestionably a Coen Brothers film through and through, their input gives the material a very tasty, unusual edge; the characters therein coming across as much more charismatic and interesting – perhaps in the way that you would only expect from the Brothers. The dialogue too is snappy and eminently quotable; the characters practically speak a different language, one which is at once suitable for the period, yet also, again, eminently Coens’.

It’s the story, however, which helps this piece stand out from much of their other work – and which makes it work – as this founding backbone (the same loose plot as Yojimbo, A Fistful of Dollars et al.) ties everything together in a complicated yet elegant knot. Furthermore, certainly the first time you watch it, you would be hard pushed to notice straight off the similarities between Miller’s Crossing and its predecessors – which is surely a testament to the originality of the piece, and it’s distinctive style. To further hammer home the point it is worth noting that the Coen Brothers took a break out from writing the screenplay of Miller’s Crossing, and used the theme of their actual writer’s block to write the loose cousin companion-piece, Barton Fink, an odd film which I simply do not care for. In comparison to Miller’s, Barton has a much weaker story plot, and indeed feels much like a ‘time out’ movie which they made in between heavyweight productions – which was actually the case.

Aside from the strong story, which – the first time you watch it – will only fully hit you when you get to the end, at which point you will hopefully come to have a newfound respect for this movie, one of the other great things that Miller’s has going for it, is the presence of some truly great actors. Whilst the Coen Brothers do bring along many of their regulars – the ever-dependable John Turturro being the most obvious name – it’s the presence of the non-Coen-stable actors which really works for this piece. Gabriel Byrne is fantastic as the expert strategist Tom Reagan, making for a distinctly human antihero protagonist, and one who you simply can’t read until the final reveal. Byrne’s always been underused in Hollywood, his pivotal roles in the likes of The Usual Suspects, the underrated thriller Smilla’s Sense of Snow, and even more throwaway fare like the Assault on Precinct 13 remake, and Arnie’s End of Days – both where he gets to chew the scenery up as a villain; in the latter he makes for a great Devil – simply don’t reflect his talent, although it looks like his recent HBO TV series, In Treatment, has afforded him some meagre recognition. One of the great things about his role in Miller’s Crossing (and thus a great aspect of the film itself) is that he does not telegraph his intentions; as a viewer, you are on edge waiting for what will happen next, and this lack of exposition allows for some genuinely tense, dramatic moments. Not a natural tough guy hero, he is perfectly suited to the role, and is one of the many perfectly cast actors on board this particular train.

Although the part was not written for him, I could not think of a better person for the role of mob boss Leo than Albert Finney; his performance here is so resoundingly tough, in an old-school way, a real tour de force depiction of the kind of boss you could easily believe existed back then: set in his ways, stubborn and proud, with a weakness for women, and a refusal to either back down or listen to the voice of reason – he says to his lieutenant, Tom, at one point: “We’ve faced worse odds before and won”, to which he immediately gets the reply: “But not without reason, Leo. And it helps to have one.” Perhaps one of the most memorable moments in the movie is when Leo surprises us all with his Tommy-gun-toting stance against a couple of would-be assassins, the scene, shot to a overpowering rendition of “Danny Boy”, reminiscent of Tony Montana’s last stand in Scarface, and Finney exuding just as much tough guy bravura.

Marcia Gay Harden may not be conventionally stunning, but she works well as a 30s gangster’s moll, with just enough zing to give her character some dimensionality – you’re never sure quite what to make of her either: does she love Leo, or is she just manipulating him, or is it somewhere in between? It’s a great breakthrough performance from her, even though she’s done little else of note since.

Then we have all the Coen Brothers regulars: John Turturro, suitably greedy and weasel-like as the crooked bookie who is under threat of execution for his dealings, appears to have sunk to an all-time low with his participation in the Transformers trilogy; Steve Buscemi, in a glorified cameo here, is currently enjoying the golden twilight era of his career with his pivotal role in another HBO drama, the Scorsese-backed Boardwalk Empire; and John Polito, who has his biggest Coen Brothers role here as the rival gang boss, Caspar.

As opposed to Albert Finney who, although second choice, turned out to be perfect for the role of Leo, I still have a few reservations with the second choice casting of J.E. Freeman as Caspar’s lead enforcer Eddie Dane. Whilst Freeman isn’t bad in the role, one has to wonder how things might have turned out had the first choice – the man who the Coens had written the role for – Peter Stormaire (Bad Boys II, Constantine and otherwise Coen Brothers regular in Fargo and The Big L) actually been available. It’s a minor quibble, and more food for thought than anything else.

The casting is excellent, and the character development is beautiful – the Coens making these roles, which are loosely familiar with their counterparts in Yojimbo and ‘Dollars, unquestionably distinctive. Aside from the strong story, clever dialogue, excellent characterisation and superb performances, they further threw into the mix a suitably authentic period setting (shooting in old New Orleans, where, apparently, they faced almost as many corrupt cops as they were depicting in their movie) as captured by legendary cinematographer Barry Sonnenfeld (who went on to direct Get Shorty as well as the Men in Black films), and gave the film a beautifully soulful score: elegant, playful yet also tragic, it was a loose riff of a traditional Irish tune: “Lament for Limerick” and it is impossible now not to associate it with Miller’s Crossing. All of this on a shoestring budget that the Brothers’ estimated to be little over $10 Million.

Of course, as much as I can lavish praise on this, a Coen Brothers masterpiece – in my opinion – there are few other filmmakers quite as Marmite-like as them – and your opinion of their work will be much more subjective than most. Perhaps it’s because of their distinctive humour, as humour is a peculiar matter of personal preference, but, either way, there will be many will absolutely love this movie, whilst others will likely not make it through the first fifteen minutes of thick dialogue and confusing plot machinations. All I would like to say to newcomers is: give the film a chance and sit through it to the end. There really are few films which deliver such a satisfactory final reveal, and the one in Miller’s Crossing is a huge part of what makes this an enduring classic. Highly recommended.