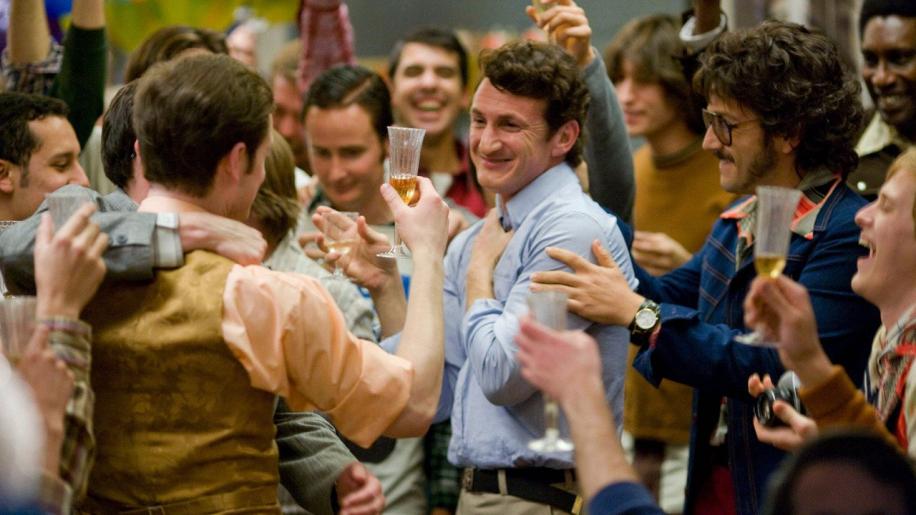 'Milk' is the story of gay activist/politician Harvey Milk and his progression from humble beginnings in the gay hostile neighbourhood of the Castro, San Francisco (now the gay capital of the world), to achieving the title of first openly gay official elected to government office. Met with critical success and scoring a Best Actor Oscar this year for Sean Penn, it also picked up a golden statue for Best Screenplay. In addition to these accolades 'Milk' received nominations for Best Director, Best Editing, Best Music, Best Picture and Best Supporting Actor (Josh Brolin).

Gus Van Sant ('Psycho' [remake], 'Good Will Hunting') takes the helm on 'Milk' and handles the emotional story of Harvey's crusade for acceptance with aplomb. Featuring archive footage from the 70's interspersed with the feature presentation, the end result is a documentary stylised product. While the archive footage is of poor quality, it's still completely watchable and I have to say that as the movie progresses, these archive segments really add to the main feature. This technique also affords Sant with the ability to take us back in time without the need to rebuild massive sets dressed in 1970's fashion.

The always fantastic (bar S.O.S - “You never go full retard”) Sean Penn ('Mystic River', 'U-turn') gives a performance that would make Eric McCormack (that's Will from 'Will and Grace') pink with envy with his portrayal of Harvey Milk. Appearing composed, slightly feminine and fiercely intelligent, Penn perfectly depicts Milk's innate ability to lead and inspire. Josh Brolin ('The Goonies', 'American Gangster') plays Dan White, a suspected closet homosexual trying to make it in the nasty world of politics. Brolin really is fantastic in this role and manages to portray the conflict raging in the mind of White as he becomes increasingly more unhinged as the movie progresses. James Franco ('Spiderman', 'Pineapple Express') gives another very strong performance as Harvey's possible true love Scott Smith. In conjunction with Emile Hirsch ('Speed Racer'), Alison Pill and the rest of the equally strong ensemble cast, these fine actors serve to bolster Penn's performance and are very impressive throughout.

The opening vintage news reel footage and newspaper cuttings immediately transports the audience back to the early 70's where homosexuality is seen as an affliction rather than a way of life and oppression is rife. One of the newspaper headings states “Police start crack down on homosexual bars”. This really sums up the mindset of the era in which this movie is set. We then switch to 1978 as Harvey Milk, neatly presented in his customary suit, records (on tape) a short autobiography under duress of a death threat. Featuring at various intersections throughout the movie, these monologues with Milk sitting alone in his kitchen, telling his life's story, act as stop gaps to fill in sections of the plot that are not always depicted on screen. Sant then drops a bombshell on the audience with the newsreel footage which informed the nation in 1978 that Harvey Milk and Mayor George Moscone had been assassinated. Well at least now we know how the movie ends!

Proceedings properly get underway (with regards to Milk's biography) when Harvey meets Scott Smith (Franco) in a subway station in 1970's New York City. A slightly sozzled Milk informs Scott that it's his birthday and he doesn't want to spend it alone. In the spirit of free love Scott duly complies and, following a whirlwind romance, the two lovers pack up and relocate to the Castro district in San Francisco and open up a camera shop. Sant intersperses these sequences with archive footage from the Castro (and Market area) from 1972 which, in conjunction with the 70's style home film segments featuring Harvey and Scott, recreates the ambience of this era. With openly gay-hostile neighbours vowing to make life difficult for “their kind”, Milk decides to bring a little gayness to the Castro district! With open acceptance of all things gay, Milk encourages his friends and those akin to his sexual preference to hang out, without fear or self-consciousness, in the gay Mecca that he has created almost overnight. With the aid of Milk's monologue we see that the cops hated this festive gathering in the Castro, where businesses supporting Milk's cause flourished, and those opposing slowly decayed and went out of business. Following his involvement in a coup to boycott Coors beer, Harvey's camera shop becomes the epicentre of a large political movement involving the gay community. With regular gay beatings and increasing brutality towards homosexuals, the situation rapidly deteriorates to the point where attack alert whistles (necessarily carried by all gay people) sound on a regular basis. Although fearing for his own life due to his now elevated political status, Harvey decides to take matters into his own hands by running for San Francisco city supervisor, as we witness his first fledgling steps into politics. Assembling a team of political activists, including Cleeve Jones (Hirsch) who seems to be a younger incarnation of Harvey himself, and Anne Kronenberg (Pill), he and his young team run a couple of unsuccessful campaigns. Encouraged by rapidly increasing support, Milk turns his focus towards winning a seat on the State Assembly, with equal rights for human beings regardless of sexual preference as his ultimate goal. Facing opposition from politicians such as devout Christian Anita Bryant, who tars homosexuality, bestiality and child abuse with the same brush, Milk begins his steep uphill struggle.

When Milk finally makes it into office (in 1978) he forms an early but unsteady alliance with Dan White (an impressive Brolin), whom he suspects is a closet homosexual, and sets about getting his agendas on the table. The affable Milk greets everyone with warm, open enthusiasm but beneath his welcoming handshake lays a political acumen harnessing the power of the people. His main agenda is to oppose Proposition 6, backed by John Briggs, Anita Bryant and their Bible-belt anti-gay supporters, which if passed would make hiring and employing homosexual teachers illegal. As the battle for Proposition 6 moves to California itself, Milk, in the face of a death threat, gives an impassioned speech quoting from the Declaration of Independence, at the Gay Rights Parade on June 25th 1978 as the original “Somewhere Over The Rainbow” plays poignantly in the background (well it plays during vintage footage of the parade itself but you get the message). Drawing comparisons to the oppression of the Jews during the Holocaust, Milk deftly turns the tables on the argument for Proposition 6 (during public debates with Briggs) and calls for all homosexuals to come out of the closet and fight for their rights. Finally the first gay rights law is passed, signed by Harvey himself and supported by Mayor Moscone (who is sympathetic to his cause), securing safety and acceptability for the entire gay community.

The decision by Sant to inform the audience of Milk's assassination in the first ten minutes was a brave decision, as viewers may not have been aware of this fact (I certainly was not), and thus this opener may have ruined the entire story for many. As Milk's biography contains plenty of interesting events, this major plot factor becomes almost secondary, with Milk's unshakable mission to fight for the rights of the gay community becoming the focus. The fact that he died for his cause only serves to bolster his commitment and highlights how many lives he may have saved by giving up his own (literally). Aside from Harvey's forays into the cut-throat world of politics, Sant also includes plenty of subplots involving Milk and his personal life, which serve to further highlight the oppressive nature of being gay in this era. Harvey himself lost three lovers to suicide (although the brutal strain of politics may have also played some part). Penn does some worthy acting in the "intimate" scenes for a heterosexual (as do James Franco and Diego Luna), but he was married to Madonna for a while so I'm not too sure how alien having another man in bed was for him! The “gayness” is handled very well in this movie, with all performances being very transparent with regards to their sexual orientation but executed with distinct taste. The only exception to this rule is the flaming Jack Lira (Luna) who really gives an unnecessarily over the top performance that produces plenty of moments of pure cringe.

While I don't agree fully with the title of “An American Classic” that is boldly emblazoned on the disc's cover, I have to say that this movie contains an enjoyable and highly informative story depicting the man that broke down the barriers of sexual prejudice and started the gay rights movement. Penn is magnificent and gives an amazingly believable and passionate performance right down to minute hand gestures and vocal intonations. While I'm in the Rourke camp when it comes to the Academy accolade that Penn received (based on raw emotion evoked), I have to admit that Penn's performance in Milk equals, if not betters, his last award winning outing in 'Mystic River'. Many will choose to watch this movie for Penn's performance, and while the supporting cast are extremely strong and convincing (especially Brolin and Franco, who for my money is shaping up to be the next Johnny Depp), it really is his engrossing performance that steals the show and makes this movie “work” on so many levels. The story of Harvey Milk serves as a reminder of the grim and shocking oppression that homosexuals faced not so long ago. With the visual style and the decision to include original footage from the gay rights movement, some of which depict shocking brutality, Sant and his cast and crew have produced a worthy product that stands as a testament to one man's crusade to fight until the bitter end for what he believes and to demonstrate the huge increase in gay acceptance that has occurred over the last thirty years. The footage from the 30,000 strong march that took place following the deaths of Harvey Milk and Mayor George Moscone is especially effective. Milk really was a unique human being who championed human rights and the freedom of sexuality. Set in an era where even the now liberal San Francisco was opposed to gay businesses, his achievements are monumental. Milk's efforts literally brought the gay community out of the closet once and for all, an astounding achievement for a man who was only in office for one year prior to his death. Justifiably comparisons are drawn between Milk and Gandhi/Martin Luther King, as he too was a kindred political martyr for his cause. Hopefully this movie will serve to highlight the anti-gay lobbying that is occurring in California at the moment.