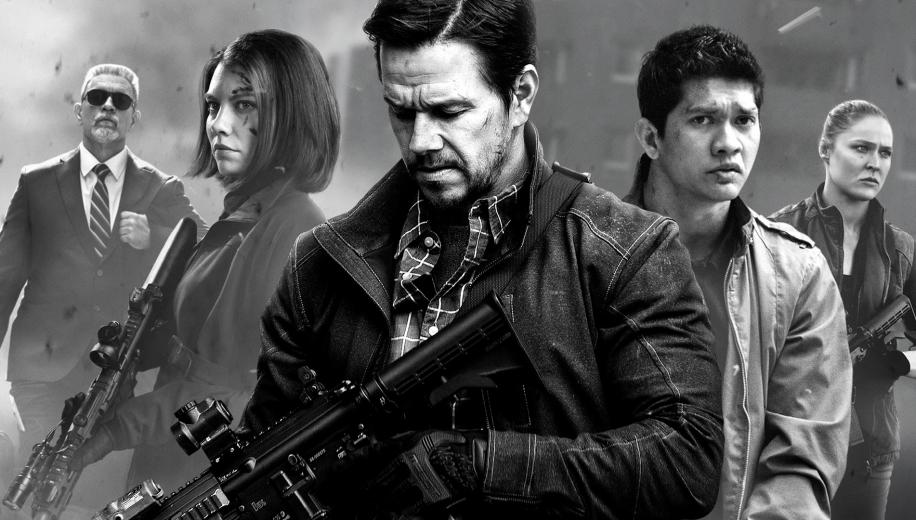 The 'Bergs - as perhaps with any tried-and-tested director/star collaborators - generally deliver a decent quality of output, from the high point of Lone Survivor to their engaging oil rig disaster actioner, Deepwater Horizon, to their aftermath of a bombing drama Patriots Day, with Mile 22 being the first one which can't even slightly purport to being based on any kind of true story, an ostensible 'high concept' premise which secretly just thinly veils a pretty rote run-and-gun action escapade for the duo.

All that said, if you've seen the trailer, you can't really complain about the end result - it's Wahlberg and co. (in this case the "co." includes MMA fighter-turned-part-time-action-star, Ronda Rousey, who's already had a bit of Expendables and Fast and Furious sequel fun, as well as indonesian martial arts god, Iko Uwais, who gave us The Raid films, and Netflix's The Night Comes for Us, but makes his 'starring' theatrical debut in the US here) playing a spec ops unit who are assigned a tough escort mission and, essentially, have to fight their way across deadly territory, guided by John Malkovich's overwatch.


It's 90 minutes of chaos; a straight-to-video action movie done by a mainstream director and star

What's a little curious about the production is that it was originally intended to be a breakout US action vehicle for the co-teaming of Rousey and Uwais, both arguably martial artists first and foremost, and actors second. Neither - and this is despite Uwais' staggering skills and undeniable screen presence - are the kind of draw for a mainstream theatrical release, and had they made the movie as envisaged, it would have undoubtedly ended up being directed by someone other than Berg and dumped on the straight-to-video shelves. Which is a shame, as both fighters deserve better, more prominent action roles.

In return for a theatrical release, and the directorial work of Berg (who undoubtedly only agreed if he could cast his muse in the lead), Wahlberg came on-board, usurping Rousey not one but arguably two seats, with even the 'main' female support coming from the arguably higher profile Walking Dead star Lauren Cohan. Thankfully Uwais' position remains largely the same - perhaps with less focus in the opening sequences, and with crazy fight editing that would make you think the Bourne movies are slow, but still clearly the action star of the show, with Wahlberg gifted a rather odd backstory which appears to be little more than an excuse for the actor to speak in his usual speed-driven and comically aggressive rattle which would be kind of funny to watch, but only if he were opposite Adam Sandler's Happy Gilmore.

It's a silly, stupid film - one where even the twists have been done to death before - but it's got a suitably over-zealous cast, a decent death count, and is shot in a cocaine-crazy and chaotically frenzied but nonetheless suitably flash fashion by Berg, whose work with Wahlberg is, despite being likely at its nadir here, still reasonably watchable. Undoubtedly the critical criticism and lack of box office success will put paid to the notion of turning this into a franchise for the duo (it's hard to see much reason for the planned trilogy, as there's nothing original here, but that hasn't quite killed the plans yet, nor the open-ended twist ending), but that would be no great loss. It's a straight-to-video action movie done by a mainstream director and Hollywood star; 90-odd minutes of utter chaos, resoundingly forgettable but also perfectly entertaining for action fans.

Curiously forgoing a 4K release on either side of the pond (especially considering it was shot digitally at resolutions of up to 8K and passed through a full-fat 4K Digital Intermediate), Mile 22 instead gets a 'standard' Blu-ray release, but the results are still very impressive, affording the relatively glossy feature a largely excellent 1080p/AVC-encoded High Definition video presentation framed in the original theatrical aspect ratio of 2.4:1 widescreen.

Detail is on-point, lapping up the increasing lines added to Wahlberg's permi-frown, and the various levels of battle-damage that the characters take along the way - including the permanent kind - with fine observations allowing the various environments to pop with all the intricacies that they afford. The colour scheme is similarly impressive, from the lush visuals of the opening prologue to the more gritty urban environments where the main events take place. Black levels are strong and solid, and overall it's a largely demo presentation. Berg has always managed to deliver decent high-end visuals on his productions, irrespective of budget, and Mile 22 is no exception.

For those surprised about the lack of a 4K release for this actioner, what's perhaps even more disappointing is the lack of a full HD 3D immersive audio track in the manner of Atmos or DTS:X, but - getting past this - the accompanying DTS-HD Master Audio 5.1 track still delivers the goods in fine, oftentimes demo, fashion.


A very good track nonetheless, making the most of the action to draw you into the war zone

From the action-heavy opening sequence to the action-dominated main event, the track is defined by its coverage of the bombastic effects, with clear and coherent rendering of the dialogue over the frontal array and an utterly generic but nonetheless effective score to drive along the proceedings, given fine treatment across the array, but the gunshots and explosions really igniting the stage. LFE comes into play, and there's a nice degree of separation - it's hardly what 3D object-based audio would have afforded, but it's a very good track nonetheless, making the most of the action-heavy elements to draw you into the war zone.

A straight-to-DVD feature, despite the fact that the 'Bergs do offer a better standard of actioner

Very much a does-what-it-says-on-the-tin kind of affair, this fourth collaboration between the 'Bergs is a typically competent but also resoundingly unremarkable entry, with Lone Survivor remaining the high point of their work together, and the remainder being fairly interchangeable, depending whether you want more or less action/drama/disaster in your film (add 'mystery' to that for their next collaboration - for Netflix no less). Indeed, if Netflix had released the rest of their movies, the streaming service would probably have a better reputation for above-average productions. As it is, you can see why this was something of a Box Office disappointment - if it weren't for the theoretical star power of Wahlberg, this would have likely ended up a straight-to-DVD feature, which is really what this is, despite the fact that the 'Bergs do offer a better standard of actioner, even if it is generic as all hell.

The Blu-ray release (the lack of a 4K release here or in the US is likely a reflection of the lack of success this feature enjoyed on the Big Screen) provides largely excellent video and very good audio, and a smattering of extras to round out a good disc for fans to pick up.