Word to the wise – don’t watch this in the daylight! 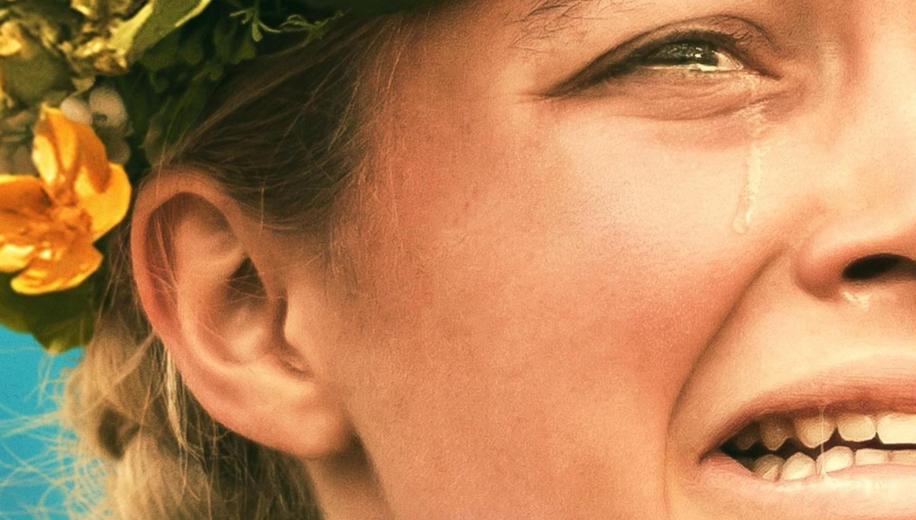 A sun-soaked nightmare from the director of Hereditary that’s as horrifying as it is audacious.

When it comes to gore, horror and dread, we’ve become accustomed to having the shadows, the darkest night and the unkind early hours be the enemy. We’ve learned that monsters come out at night and that darkness equals death, destruction and total terror. Midsommar provides both good and bad news on that front; the good news is that the nighttime isn’t scary anymore. The bad news is that sun-drenched days are your new nemesis.

If there’s one thing we learned from Ari Aster’s first film Hereditary, it’s that home is where the horror is. Or at least, that’s where it starts. And so it is with Midsommar, which begins with Dani (Florence Pugh) suffering a terrible catastrophe, leaning on her less than supportive boyfriend Christian (Jack Reynor) for help, and getting literally nothing but grief in return. Christian’s Swedish friend Pelle (Vilhelm Blomgren) invites Christian, Josh (William Jackson Harper) and Mark (Will Poulter) to his home village, to celebrate the midsummer at a special celebration that’s only held every 90 years. Christian is guilted into inviting Dani too, and soon the whole group heads off to Sweden for some quaint festive fun.


A film made all the darker by how light it is, Midsommar is an unrelenting nightmare, that’s incredibly beautiful, shockingly humorous and completely, utterly disturbing

Pelle’s community, the Harga, live in an inexplicably bucolic and beautiful part of northern Sweden – all verdant green fields, lush trees and offensively blue skies. Aster, together with cinematographer Pawel Pogorzelski and production designer Henrik Svensson, has crafted a sun-saturated, hurts-your-eyes-it’s-so-bright wonderscape that’s chock full to the brim with danger, despite its Moominvalley appearance.

A film made all the darker by how light it is, Midsommar is an unrelenting nightmare, that’s incredibly beautiful, shockingly humorous and completely, utterly disturbing. The Harga are dressed in bright white traditional robes and vacantly welcoming grins. The American students, and some other British visitors, are welcomed eagerly to join in the festivities, and there’s a sense that by the time Dani – and indeed us, via the camera – arrive in Sweden, it’s already too late. Part of the enjoyment in Midsommar is in the total sense of unease. From the very first glimpse of the Harga’s home to that ominous maypole to the frankly unforgettable horrors that await, everything is so clearly off, that it’s easy to get caught up in the heady sense of terror.

Indeed, the characters we’re presented with are so easy to root against that it’s much easier to watch them be hunted. This is one of many masterstrokes Aster makes – the acts that make up the Harga midsummer festival are, objectively, completely abhorrent, but between Christian’s cruel disinterest in Dani, and Mark’s wilful unpleasantness, the audience is taught to care about the characters that little bit less. The horrors that transpire are blended effortlessly with inky black humour, and before long you’re watching a totally diabolical show of perversion and violence with a disproportionate amount of joy. It’s sick, and it’s genius.

For a film with murder, mayhem, rituals, terror, screaming, crying, sacrifice, blood, one of cinema’s weirdest sex scenes and no shortage of choral singing, it’s shocking how enjoyable Midsommar actually is. That sex scene, which involves Christian, Maja (Isabelle Grill) and a host of Harga women, is destinated to be a cult quote-unquote classic. It’s subversive both in its explicit and perverse content and in the way it centres a naked male as the object of an exploitative sex scene – normally the preserve of (blonde) women in horror. It’s one of the many examples of how the film weaves absurd humour – and it really is funny – with horror for a tone of utmost unease and trepidation. It’s what makes watching this film such an experience.

There’s no denying the riffs on The Wicker Man, and where other films make leaning on well-known classics something of a chore, Aster imbues Midsommar with a unique energy that immediately stands it apart as a new horror proposition. There are tropes, of course – these people we’re introduced to at the start of the film are quite clearly the standard horror about-to-be-slaughtered characters, for example – but the combination of the brightly-lit locale, a superb leading performance by Pugh, the hypnotic and repugnant Harga, and masterful heightening of tension mean that Midsommar is a new experience from start to credits.

Upon arrival at the Harga’s village, our American friends are under the influence of psychedelic mushrooms, and are soon plied with hallucinogen tea that further confuses them. This is one of the occasions where the camera and its motion are used as a plot device in itself – it’s warped when the students are tripping, it circles as Dani participates in the symbolic maypole dance, and it creeps ever tighter and closer, further placing the audience in the same sense of asphyxiating desperation.

The delights – read, truly shocking horrors – of Midsommar are best seen without prior knowledge. It’s a film about occultism and rituals and is filled with the fascination for pagan tropes and traditions that Aster toyed with in Hereditary. But it’s also a film that’s about the quiet terror of failing relationships, passive aggression, co-dependency and our own personal weaknesses, and the final act of the film – horrendous and almost unbearable as it is – culminates in a twist that underlines this.

Watch this for the maddeningly beautiful cinematography, the unearthly characters and a truly unique perspective on what’s scary. There’s immense violence, plenty of laughs, lots of watch-through-your-fingers moments and imagery that will stick with you well through the summer and into many seasons to come. Word to the wise – don’t watch this in the daylight.