And the fourth angel poured out his vial upon the sun; and power was given unto him to scorch men with fire. 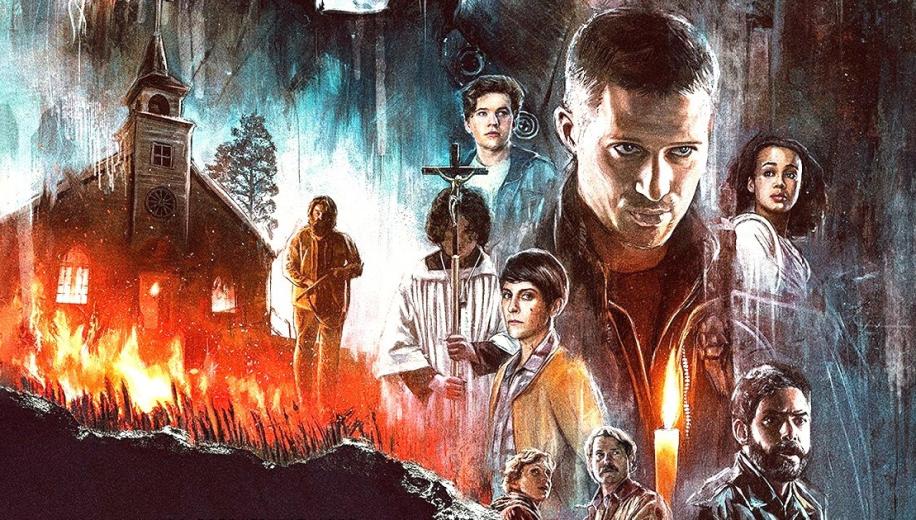 Mike Flanagan has more recently become known for his revivification of gothic horror, particularly through his generally well received “The Haunting Of” anthology series (okay, so this reviewer was not so enamored with the stodgy Bly Manor but call that an anomaly). Flanagan’s roots, however, are buried deep in the moldering earth of the works of Stephen King and nowhere is that more apparent than in his latest original project for Netflix, Midnight Mass.

The island of Crockett, off the coast of Washington state, awaits the return of its elderly priest, Monsignor Pruitt, following a pilgrimage to the Holy Land. However, at mass one morning, the devout island community discover that the Monsignor is too ill to return and has been temporarily replaced by the young Father Paul Hill. As the town falls under the thrall of Father Paul’s sermonizing, strange things begin to happen to the elderly congregation and a dark shape is seen stalking the island at night.

Filled with religious symbolism and commentary, Flanagan’s story hits that rare mark of feeling timeless, like something you must have seen before but can’t think where. His deft hand with both Catholic text and iconography allows him to draw out a compelling religious horror across its seven episodes, baiting the audience with troubling parallels between Catholicism and cults and occasionally beating them over the head with blinding obvious metaphor when required. Unafraid of tackling subjects including the seeming immunity the church faces under accusations of crime, the religion’s guilt and piety-based methods of control and the mob mentality of all kinds of organised religion, the series takes its time to allow its figurative elements to play out.

As one might expect from a Mike Flanagan project, the shooting is pitch perfect with all of his uncanny dream-like hallmarks. Particular attention is paid to main character, Riley Flynn’s experiences, and the way in which the past coming back to haunt him is presented is visually exciting and original. The show also knows how to turn a scare when it wants too, either through cheap (but effective) Hollywood jumps, bloody violence or plain old psychological unease. As with all past Flanagan projects, some of these are far more effective than others. He still favours the gothic over the gruesome and the effects work feels more action-oriented than horror, much like the final act of his acclaimed Doctor Sleep adaptation but his directorial touch is both obvious and welcome.

Once again, however, nowhere are his shortcomings and indulgences more apparent than in his scripting. With its small town community, religious overtones, supernatural horrors and troubled pasts, Midnight Mass is one of the truest Stephen King adaptations not based on a book by Stephen King and that comes with all the praise and baggage you might imagine, its style falling somewhere between Salem’s Lot and The Stand. As with King’s work over more recent years, wordiness sometimes gets in the way of the story and conversations between the characters, while sometimes insightful and touching are equally as often labored and seemingly interminable. Conversations don’t happen so much as people monologue at each other for long minutes explaining their past, their feelings, and their personal philosophies. In smaller doses, this could be thoughtful, insightful dialogue but when everyone speaks like this to everyone else, it feels a lot like latter-day King, i.e. a bit much.

Nevertheless, there is a very able supporting cast to help sell this verbose style. As Father Paul, Hamish Linklater is absolutely magnetic in his performance. Able to turn up the levels of passion and earnestness past ‘compelling’ and all the way into ‘terrifying’ and back again within single scenes, Linklater’s power on screen is undeniable. Joining him are many of Flanagan’s favoured company including Hill House’s Kate Siegel and Annabeth Gish as Erin Greene and Dr. Sarah Gunning, growing doubters of Father Paul’s power, along with the island’s prodigal son, Riley Flynn played by Zach Gilford (The Purge: Anarchy). Rahul Kohli (The Haunting of Bly Manor) also turns in a noteworthy performance as town law enforcement and religious outsider Sheriff Hassan. Between them, the players manage to ignite explosive performances and forge believable connections through their ability to sell Flanagan’s oratory style.

Despite these valiant performances, as the events unfold, and take some genuinely unpredictable turns (as well some very predictable ones) each episode still has a tendency to sag in the middle. The show should be vital and pumping, ratcheting up the tension as the events become more and more supernatural. Instead, each hour often ends feeling slightly under-filled. Not that the show should be hacked at by hyperactive editing, that’s not the atmosphere of Midnight Mass, but maybe each character could just end their dialogue one line earlier.

... Linklater’s power on screen is undeniable...

As a final note, it has to be mentioned that the make up in the series is… noticeable. It serves a purpose, is vital to the plot, but it is noticeable in a, “I also have a can of white hairspray and some latex and could probably recreate these effects myself” sort of way. For a production that is otherwise above reproach, design wise, it’s an unfortunate and distracting element.

Sustaining one horror story for the length of a TV series is not easy. Particularly when it’s an attempt as earnest as Mike Flanagan’s tend to be. But here, he just about threads the needle, keeping things ticking over with just enough shocks and twists to make it work. For those seeking out an early Halloween treat, you could do much worse than attending Midnight Mass.